The band plays 3-6 concerts every summer, starting with the 4th of July in Independence, Farmer’s Day in Jesup, an evening concert in the middle of July in the park and at various care centers and other places around the area.

We have everything from junior high kids just starting out to our 89-year-old lead trumpet player. We perform patriotic songs, some concert band pieces and then marching/pep band stuff like “Hey Baby”, “Louie, Louie” and “Smoke on the Water”.

I’ve been playing with the community band since 2008. Bruce, Nicole and Jake started 2-3 years ago. I end up being the roadie for them too, hauling the equipment, setting up, tearing down, fun stuff like that. 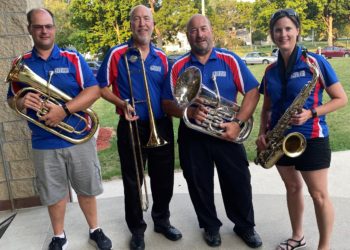