Growing up the Central Way 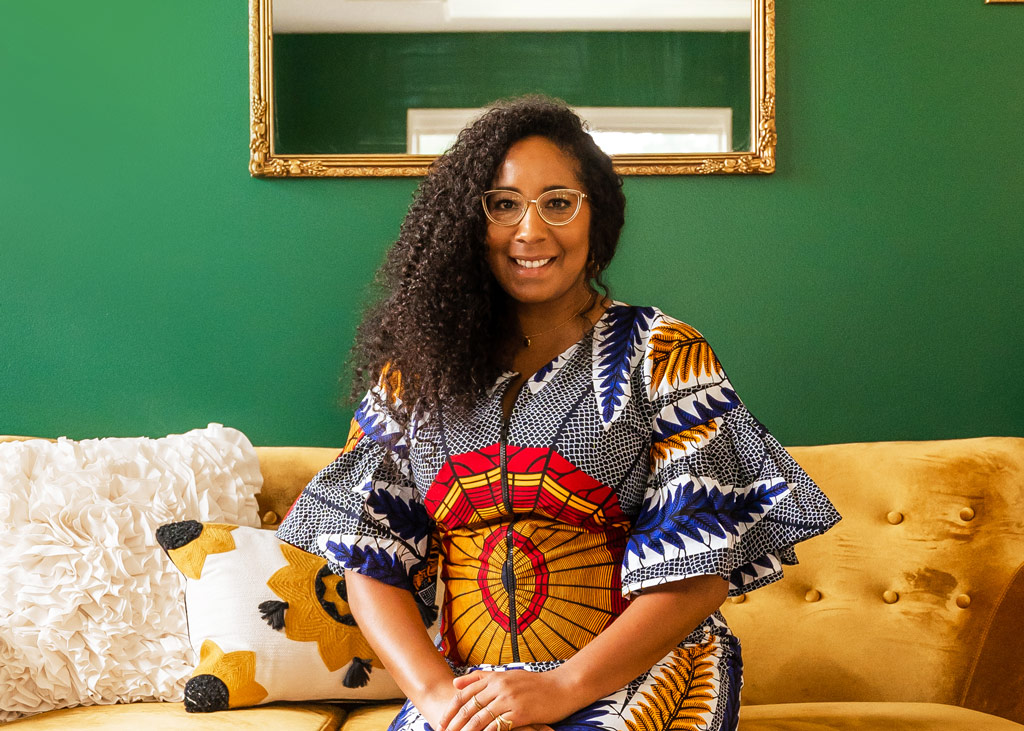 “The nature of being a civil rights attorney is very much, in its natural state, pro bono work,” says Beatriz Mate-Kodjo ’11, civil rights attorney at BMK Law in Pella, Iowa. “There’s no guarantee of payment. I don’t charge clients by the hour. I can work on a case for years and not see a dime. But the risk reward is that, in many cases, you’re able to achieve some sort of settlement or resolution either before filing a lawsuit or some time thereafter.”

Mate-Kodjo primarily practices in education and employment discrimination. She transitioned from earning her undergraduate degree in international studies with emphasis on African studies at Central College to law school at Drake University. In her third year of law school, she dual-enrolled in Drake’s College of Business and Public Administration — which meant her first year of practicing law was in tandem with finishing her M.B.A.

“I’ve been a civil rights attorney my entire legal career,” Mate-Kodjo says. “I started clerking at my first civil rights law firm while I was in law school. I got a lot of firsthand, on-the-job experience as a law student, and I probably worked more than I studied during law school!”

Part of her role is to identify the laws, system policies and practices — whether it’s employment practices or the practices of an educational institution — that lead to legal conflict.

The Need To Be Heard

People want to be heard and to take agency in their own lives. When a situation arises that may not have the outcome a person expects, civil rights attorneys work to achieve personal resolution.

“The first thing I do is when someone calls me, or I meet with someone, is listen,” Mate-Kodjo says. “I want them to feel seen and heard. I want to validate the experiences for those I believe have meritorious claims. I spend a lot of time getting to know my clients and building trust with them. I encourage them to take care of the emotional trauma that results from discrimination, harassment, retaliation and assault.”

Mate-Kodjo’s practice serves to alleviate concerns for those who have experienced gaslighting and feel unseen. Friends, family or employers may not see how their circumstances are shrouded by discrimination. They are often unable to see the situation as clearly as Mate-Kodjo sees it from the outside.

She bridges the communication gap between a client’s experience while recognizing that the employer or the school doesn’t perceive the facts or the decisions the way the client has perceived them.

“Sometimes it’s a matter of saying, ‘Let’s file your lawsuit. Let’s get your story out there. Let’s file a detailed petition that lays out for the public to see what this employer or school did to you.’ People are willing to fight until the end, knowing that they may lose — and sometimes that’s what we do. It’s just for the principle of it,” Mate-Kodjo says.

“I can look back at schools or employers I’ve sued before — some who are repeat offenders — and I can identify what’s improved since I last investigated them,” Mate-Kodjo says.

She represented sexual assault survivors who reported to their schools, colleges and universities and felt they were retaliated against.

“I have seen hundreds, if not thousands, of people who have suffered discrimination or sexual harassment at work,” Mate-Kodjo laments. “I identify very strongly with people who fight systems. I have always understood and recognized that this country has a long way to go — even the State of Iowa, despite our many civil rights accomplishments. Historically, Iowa has made a lot of progress, but it has a long way to go in terms of ensuring equitable and fair access to the justice system.”

When it comes to pursuing justice, her passion keeps her energized.

“I don’t think I’ll ever run out of energy to fight those battles. We all play a role in advancing the common good in our personal lives within our communities, within our states, within our country and in the world,” Mate-Kodjo says. “I think in the perfect world, I’d be out of business! Wouldn’t that be great?”

Mate-Kodjo gives defense attorneys credit: “While it’s their job to defend their clients, they’re also empowering them with new information and better advice. They can advise on ‘Here’s how to do better and avoid Beatriz next time,’” she says, smiling.

Mentally processing and anticipating cases can be beneficial in saving time, resources energy and allowing people to achieve some kind of personal resolution with a situation that may not have ended the way they thought it would. It gives Mate-Kodjo’s clients the opportunity to move on with life as opposed to dwelling in the negativity — and sometimes trauma — they’re dealing with.

Many of the defense attorneys Mate- Kodjo faces get paid by the hour to defend cases in court or arbitration. Civil rights attorneys like Mate-Kodjo are incentivized differently because of the nature of the work.

“I joke with defense attorneys,” she says. “There’s nothing wrong with the way they do it. Everyone — regardless of who you are, what you’ve done or what has been done to you — should have a good lawyer and good representation. The risk reward is worth it.” 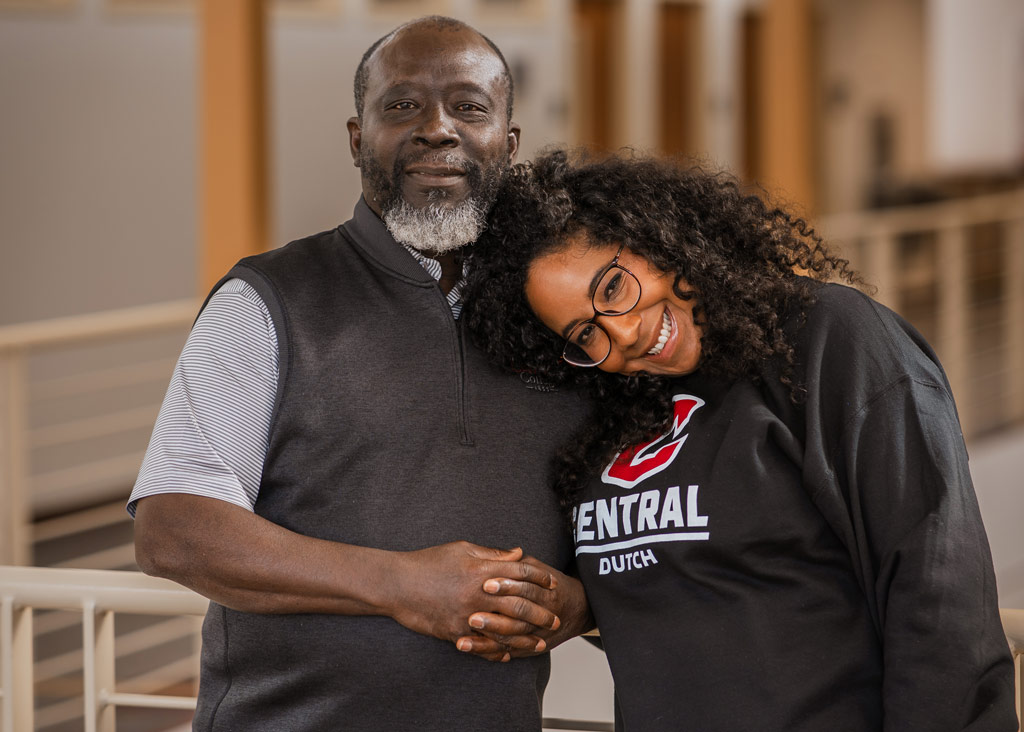 Beatriz Mate-Kodjo ’11, right, takes a playful break from work with her father, Samuel Mate-Kodjo, associate professor of Spanish, in the Weller Center for International Studies on Central’s campus.

It All Began at Central

As a child of immigrants living in a small town in Iowa, Mate-Kodjo loves to say she’s a small-town Iowa girl. Her father, Samuel Mate-Kodjo, professor of Spanish at Central since 1995, gets a lot of credit for his daughter’s decision to become a lawyer.

During her childhood, the family would get together with the language department professors and other faculty members. That was such a formative part of Mate-Kodjo’s life — wanting to see the world and to meet people from other places and cultures.

When it came time to head to college, she wanted to get away from Pella and Central. She went to the University of Iowa for three years. But after leaving an abusive relationship and dropping out of college, Mate-Kodjo returned to Pella as a pregnant college dropout.

“I had decided to have the baby by myself and move home. My dad took me to the registrar’s office, and I was enrolled at Central as a nontraditional, transfer student,” Mate- Kodjo says.

She took classes with her dad; his modern feminist literature courses were impactful for her.

“My time at Central and in his classes were part of the healing process,” Mate-Kodjo says. “Reading about the nonlinear trajectories of other women’s lives was healing.”

She graduated with degrees in Spanish and international studies with emphasis in African Studies. She spent much of her time in the Weller Center for Business and International Studies. 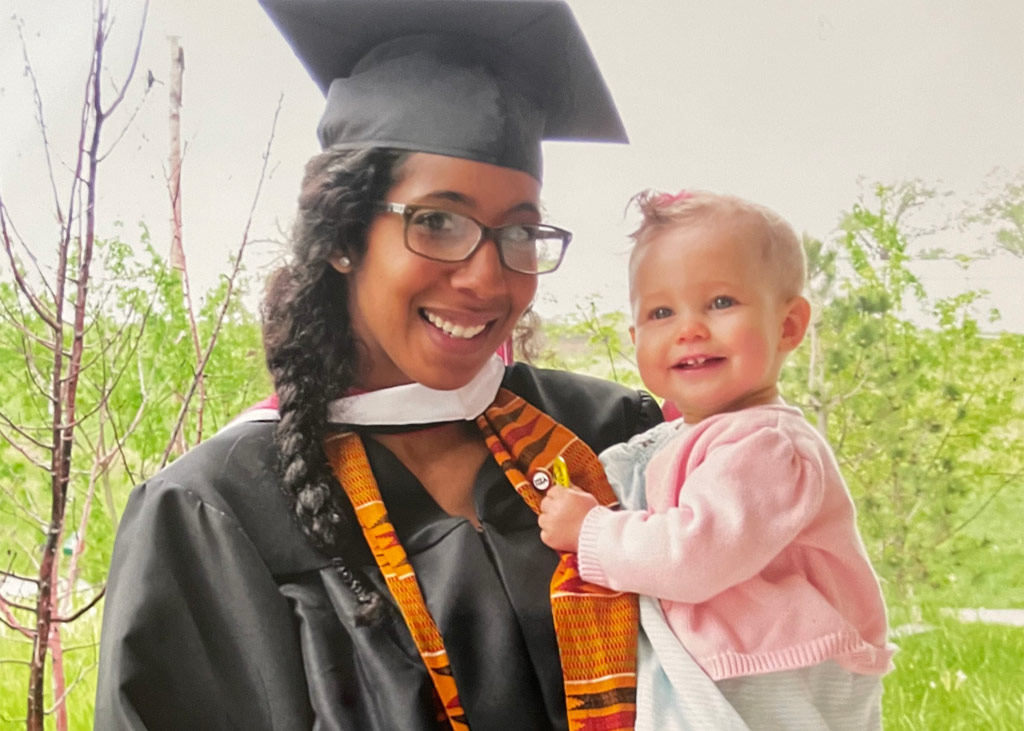 Beatriz Mate-Kodjo ’11 celebrated graduation from Central, with her daughter, Aurelia, in May 2011.

“Central was a mediating place — the petri dish for us to reconcile where we were,” Mate-Kodjo reflects. “I don’t think I’ve given my father enough credit for the healing that took place while I was at Central. Spending time in his classes and with his colleagues, learning from them, and sitting with him in the Weller Center in his office, planning my future was important. It was in the Weller Center where I manifested into the person I am today.”

“I was just trying to get done with school and transition into being a mom and a working professional,” she admits. “I spent a lot of time in my dad’s office. One day I was in his office contemplating life and asking, ‘What am I going to do?’

“He said, ‘You should go to law school.’

“Like most things my dad has advised me to do over the years, my initial reaction was no,” Mate-Kodjo laughs. “But then I did start looking at the Drake Law School website and doing my applications. I studied for the LSAT at Weller, which came full circle because three years later when I was studying for the bar exam, it was me and the Weller Center in the summer. I was in a dark little room with my bar prep materials; the Weller Center is very much part of my experience at Central.”

Mate-Kodjo came to Central at a time when she felt lost.

“I’d lost my sense of self and drive,” she says. “I had a nontraditional experience, but I made lifelong friends. I met some of my best friends here.

“My Central experience built the foundation for who I am today. I honestly think it was an important time for rebuilding my connections with my family — the familial relationships that I had neglected while I was struggling at the University of Iowa, unbeknownst to them.”

Mate-Kodjo attributes much of her personal growth during that time to Central’s modern languages department. “Taking language courses — Spanish, for my major, and also German — and being in that department with the professors, language assistants and studying culture, countries, people and the humanities — was a healing process for me,” she reflects. “I was getting back to the things that I am passionate about.”

Now that Mate-Kodjo has become the lawyer she manifested in the Weller Center 12 years ago, she plans to reinvest in Central by serving on the National Advisory Council and encouraging students to embody the Central way, so they also can channel their passions and achieve their personal and professional goals.