The Story of the Red Telephone Box on Campus 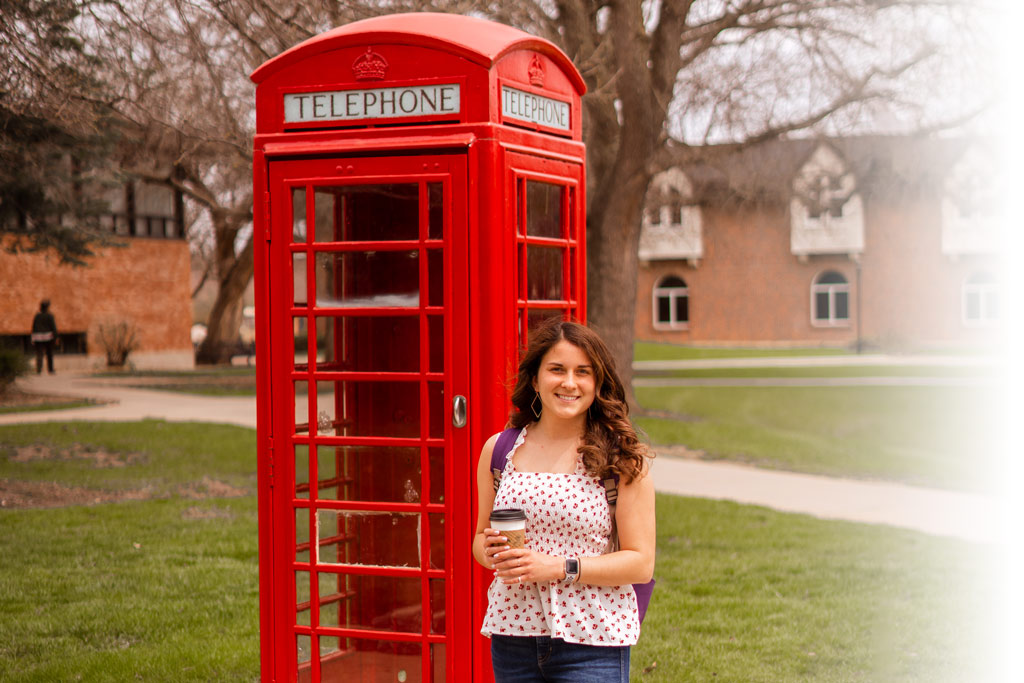 The city of Pella is known to have a touch of Holland.

But what about a touch of London? Or, maybe, um, is it Scotland?

“FIRE!! A blaze of color gleaming like a fire engine has been added to campus,” wrote Aija Straumanis ’93 in The Central College Ray in September 1991. “It’s the new red phone booth at the east end of Peace Mall. The eight-footer reaches out and touches everyone’s attention.”

More than 30 years later, the rosy-red British iconic structure continues to be at the heart of Central’s campus and serves as an ongoing statement about the college’s international interests.

The phone booth’s aesthetic architecture can be found in the background of college promotional videos and professional pictures. And it’s often used as a prop for family and student pictures.

Upon its arrival, Central students expressed mixed feelings about the telephone kiosk. While some saw it as a symbol of opportunity others saw it as a vandalism opportunity waiting to happen.

What do students and faculty think of the structure now in the year 2022? Kayla Schneider ’24, a former student admission ambassador, sees the red telephone booth as something that brings vibrant personality to Central’s campus.

“Central has been around for a long time and so has the telephone booth,” Schneider says. “Not a lot of other campuses have something like this, so it brings unique character to Central’s campus.”

When visiting campus, visitors and prospective students get a chance to hear about the telephone booth’s rich history and how it found its way to Central’s campus.

“The phone booth is something I point out on tours,” says Sam Staley ’23, student admission ambassador. “I share details about our off-campus study experiences and how someone gave the phone booth as a gift to represent London, an off-campus destination for many Central students. I frequently get comments from parents and prospective students on how pretty it is and how much it stands out. I think it represents how unique Central is.”

The college’s insurance company in the 1990s gave the telephone booth to Central to commemorate students’ academic adventures all around the world.

Originally built in the 1930s in Edinburgh, Scotland, the red box was restored by the Heritage Trading Co. in England before finding its forever home in Pella, Iowa.

One current student would like to see the telephone booth be known as more than a representation of international education.

“If there was some way to use it and make phone calls with it, that would be fun and unique,” DelTon Alexander ’24 says. His thoughts resemble those of students of the 1990s, many of whom wished at the time it had been a working pay phone.

Whether you enjoy the telephone box for its currant-red beauty or for being a symbol of immersive cultural experiences across the pond (get what I did there?), the 1,400-pound object is more than a relic in these days of super smart, tiny handheld phones that weigh less than half a pound.

Every morning on my walk to the Global Café, I find myself soaking in the beauty of the bright red telephone booth as the sun shines a glistening spotlight on it.

One thing is for sure: Whether dazzling scenery for campus visitors or a beacon of hope for those with a travel bug, the red telephone booth from London (or Scotland? You decide.) will always be one of Central’s most beloved landmarks.