John Lucas ’92 grew up in a landlocked state smack dab in the heart of the United States. His dreams of wandering the globe, sampling new cultures and learning the languages of the world meant choosing a college that would give him those opportunities was the first and most important step toward a globetrotting future.

So, when Lucas was shopping for colleges — literally, by looking through catalogs requested via postcard — he was looking for both international study options and language programs to satisfy his curiosity of the world.

“Central had this wonderful combination of being a small liberal arts college that was far enough to feel like I was getting away, but also was close enough that I could drive there,” Lucas says. “And Central had amazing international opportunities.”

He visited five or six small liberal arts colleges across the Midwest before deciding Central was the perfect fit.

“I felt more comfortable on a smaller campus than I did at a larger university,” Lucas explains. “I thought Central was a warm, comfortable place to be, but had — and still has — an open window to the world.”

Toto, He’s Not in Kansas Anymore

When Lucas got to Central, his love of language exploded. Not only did he study Spanish and French, but he also ended up majoring in linguistics.

“I discovered that there’s this whole world about how language works that’s beyond simply learning Spanish, French and English,” Lucas says.

“I’m one of the few German speakers who sounds like I have a Dutch accent, which is very odd,” Lucas chuckles. “People will ask, ‘Why are you an American with a Dutch accent?’ Well, attending Central College is why!”

Lucas capitalized on his Central advisor’s advice to explore everything by taking courses like history, philosophy, religion and fine arts. He even took a class on Latin music.

“I remember that being fun,” Lucas reminisces. “My neighbors in Kansas were Cuban, so I learned Latin American Spanish.”

When he got the opportunity to study abroad in Mexico, he eased into the experience comfortably.

“One of the great things about Central is that I got to see all models of study abroad while I was here,” Lucas says. “I started in Mexico, and that was a wonderful opportunity to see what it was like to have a center-based program.”

Center-based programs allow students to have their own little community, which is often an easier segue into another culture; however, this style of program isn’t fully immersive in the native culture, which can create a barrier for students and the cultures they’re interacting with. 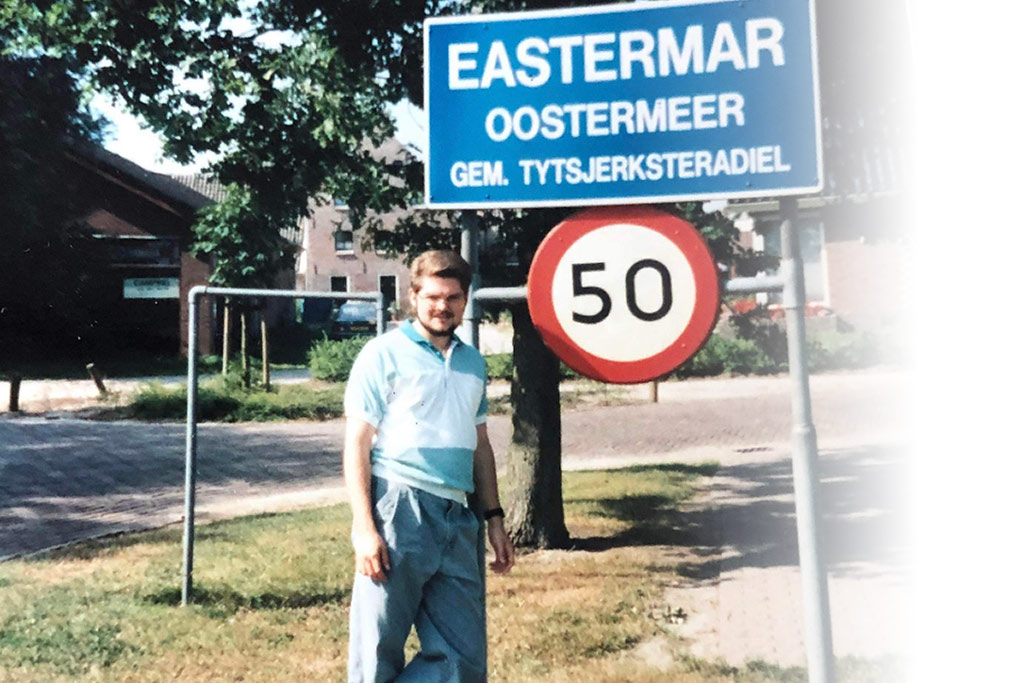 John Lucas ’92 poses with a road sign for Easermar (Dutch: Oostermeer), a village in Tytsjerksteradiel municipality in the province Friesland of the Netherlands.

Op Naar Nederland! (Off to Netherlands!)

Lucas’ second study abroad experience was in a field research program to the Netherlands, led by Phil Webber, professor emeritus of German and former professor of linguistics. The group traveled to North Holland, where locals speak a minority language called Frisian. The Central students were divided into smaller groups and tasked with learning the language — without using English.

“This was something that students almost never get as undergraduates; it was actual fieldwork,” Lucas explains. “Even if the people we were talking to knew English, we had to speak to them only in Dutch or German and investigate the Frisian language using field methods.”

The field research program, which was a completely different experience than Lucas’ first center-based program trip, deepened his desire to develop his understanding of culture and language across the globe.

Lucas wanted to continue traveling. Earning a scholarship materialized into a destination ticket to yet another unique international experience.

“I wanted to go more, and I was fortunate to get a rotary scholarship,” he says. “I went to Salamanca, Spain, and it was a full-immersion program, where I was taking classes at a university with local students. 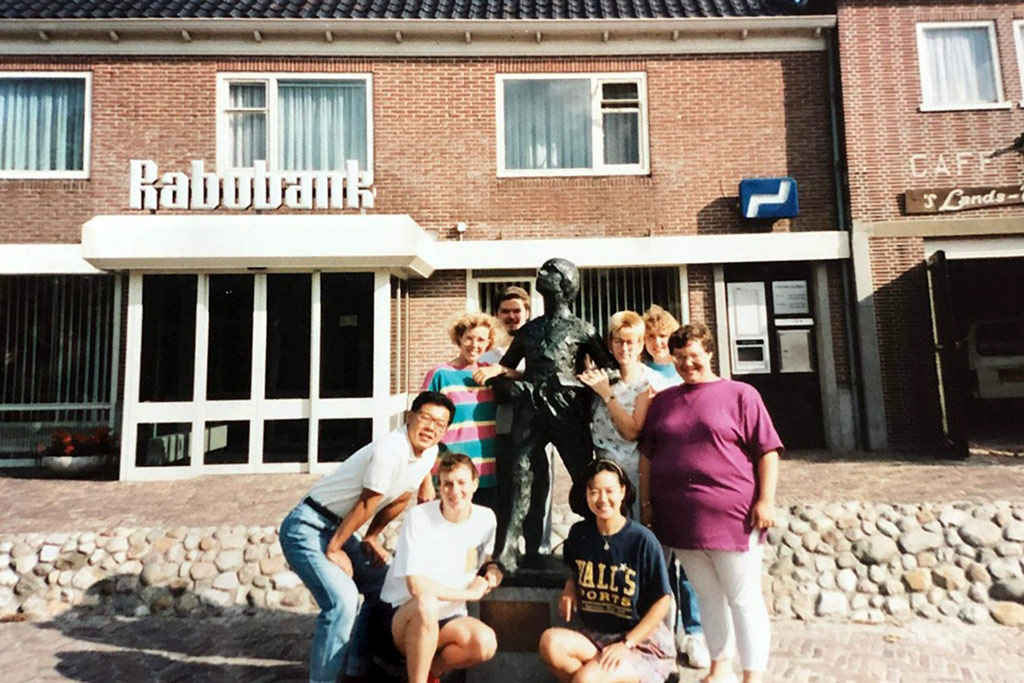 John Lucas ’92 (far back left) with other students in Friesland, a coastal province in northern Netherlands.

For the Love of Learning

After Central, Lucas had options when it came to graduate school.

“I told some of my Central professors what I wanted to study in graduate school,” he says. “They had connections and helped me identify great opportunities.”

Despite several strong options backed by Central faculty connections, Lucas chose to study Spanish in graduate school at Penn State University in State College, Pennsylvania, an opportunity made available to him through his connection with Donna Van Bodegraven, former professor of Spanish at Central and a Penn State alumna.

“I was always looking for the way to answer, ‘How am I going to get back abroad?’” Lucas says. “I loved my study abroad experiences and I wanted to make that my career.”

He was already started in his graduate program when he realized it might take longer than he wanted to launch his career in study abroad.

“I was going to have to finish my Ph.D., get a faculty job and it might still be quite a long time before I could actually lead programs abroad,” Lucas realized.

It was then that a brochure for the School for International Training, located in Brattleboro, Vermont, fell into his lap.

“SIT is a unique college,” he explains. “It’s a graduate school that has master’s and professional degrees in international careers.”

Lucas took a break from his master’s in Spanish to secure a master’s degree in international education from the Vermont-based specialty school, which scored him an internship abroad through Portland State.

“My internship was to lead programs to Barcelona, so I had the great fortune of leading students,” he says. “I was in my 20s, and I did not know what I was doing — I was barely older than the students, obviously, but they trusted me at Portland State. It was unbelievable and life-changing.”

Under the advisement of the dean at Portland State, Lucas returned to Penn State for a year to get his Ph.D. so he could continue to lead study abroad programs and teach. When it was time to transition into the next steps of his career, Lucas boasted a bachelor’s degree from Central, master’s degrees from Penn State and SIT and a Ph.D. from Penn State.

Lucas’ time in Barcelona gave him the ability to lead a program in addition to setting up the study abroad center there, which allowed him to create new opportunities for students, teach and do research.

Since then, Lucas has taken on the role of president and CEO of ISEP Study Abroad, an independent, not-for-profit organization that partners with 365 universities in 60 countries around the world.

“We create a community of colleges and universities that exchange students,” Lucas explains. “We now have study abroad, exchange and internship programs, and we’re starting to do customized programs. We’ve experimented with virtual and hybrid exchange programs.

“It’s a living, learning organization that’s adapting to the international education we offer to the changing times and the changing student body.”

He also teaches at Georgetown University in Washington, D.C., during the summer months, and is the chair of the board for the Forum on Education Abroad, an organization that sets national standards for education abroad in the United States. 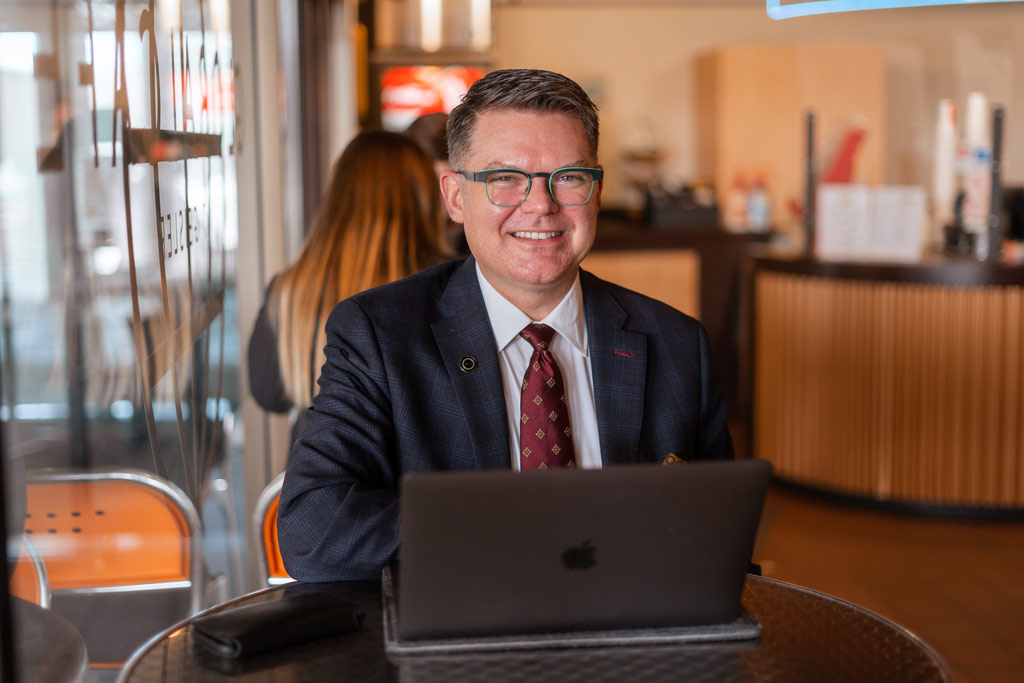 Reconnecting Central With the World

Lucas’ experience and expertise gave him the ability to partner with Central as it worked to reinvigorate off-campus study at the college post-pandemic.

“As an alum, when you come back to campus, it’s always bittersweet,” he continues. “You wish you had the opportunity to try the cool, new experience or use a remodeled space when you were here. Majors come and go, and the study abroad programs are different than they were. It’s important to keep an open mind and remember, ‘I loved my experience.’ No one can ever take that away.”

“Students are dramatically different than I was,” Lucas asserts. “They’ve grown up in a digital age and have been shaped by the pandemic — things I can’t even imagine.

“What’s exciting about ISEP partnering with Central is having an alum in leadership who understands the value and the richness of the programs we had before,” Lucas explains. “The core values are the same: deep, cultural immersion; opportunities for language study; the ability to meet people, make connections and form lasting friendships. That doesn’t change; the rest is the model.”

Also remaining are fundamental core values with a deep commitment to the liberal arts education, connection with faculty and the opportunities to study, volunteer and do fieldwork.

“As the president of ISEP, I share the values that Central has; they’re deeply ingrained in me,” Lucas says. “We do study abroad differently. We’re doing it differently than when I was a student 30 years ago, and the next president of ISEP will probably reshape the entire organization in ways I can’t even fathom. There’ll be new programs and opportunities I haven’t thought of, and that’s exciting — it’s fantastic!

“I would encourage my fellow alums to embrace the concept of deep cultural immersion and language learning that Central has always had, and to trust that we are going to go on this journey of study abroad together with ISEP. As an alum, I’m really excited I can be part of the next generation of study abroad at Central.”