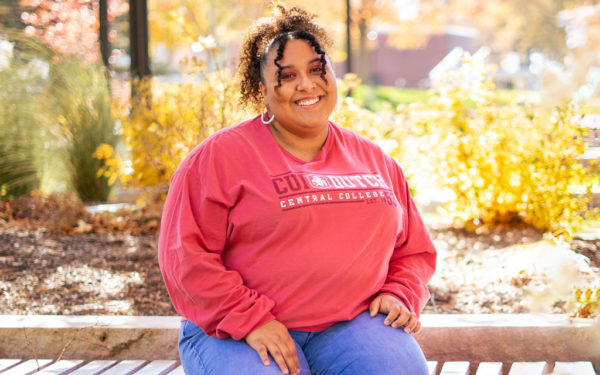 It’s true, she concedes, almost wistfully, momentarily pondering if maybe she should.

There’s little else the weight events competitor on the Central College women’s track and field team isn’t immersed in as she soaks in every precious opportunity Central offers. A biochemistry major, she’s part of that narrowest of cross-sections of the student body with membership in both the Chemistry Club and the Poetry Club, while also involved with Anime Club, Organization of Latinx-American Students and Black Excellence in Pella when she’s not tossing a discus or shot put. And, oh, by the way, in the Fall 2020 semester she became Central’s first female minority student senate president.

“I don’t really know how it happened,” Rouse says. “I kind of just said yes to everything and ended up loving everything. I’m super excited to be in all these roles that I’m in. They add a lot of dimension to my college experience.”

They also add some complexity to the daily schedule.

“It’s not easy,” Rouse says. “It’s definitely hard, but I just really like being involved and to always be doing things makes it easier, especially being supported by my professors as well. They’re actively trying to get us all involved so they’re not going to make it harder for me. If something were to come up, they would definitely say, ‘Oh, I understand.’”

Rouse says Dutch Track and Field Coach Brandon Sturman is behind her as well.

“I have a really good relationship with Coach Sturman,” she says. “He just understands what I’m trying to get out of my college experience and he’s always ready to compromise. So, If I’m not at practice he’ll always say, ‘Well, you can just do this instead.’ You’re not demonized for having other curricular things you have to do.” 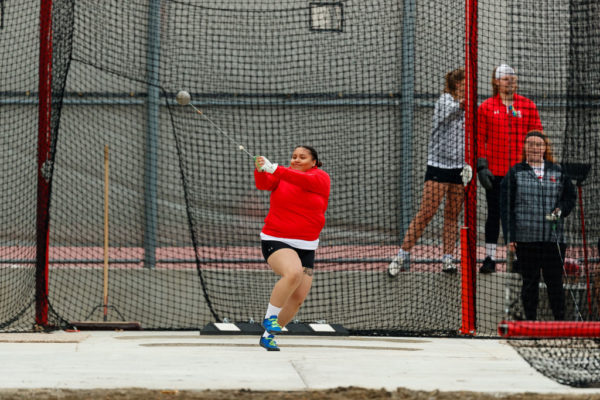 Yana Rouse ’21 makes an all-America impact on her track teammates at Central: Her leadership and positive attitude inspires and encourages others to give their best.

‘Imagine if I Could Do That’

Rouse is drawing attention for her role outside the throwing ring, as she finds herself a campus leader in what she sees as a pivotal time not only for the college but the nation. Landing the position was more a matter of discovery than design.

“Honestly that was the most random thing,” she says. “It was kind of just mentioned to me like, ‘Hey, the (senate president) position’s open.’”

She was intrigued when she realized the groundbreaking nature of the opportunity, as just the third person of color to serve as Central’s student body leader. Tej Dhawan ’91, now chair of Central’s Board of Trustees, served in 1990-91, and Ed Ollie Jr. ’93, an African American who was a running back on the Dutch football team and later team chaplain for the University of Miami football squad, served as senate president in 1992-93.

“I thought, ‘That’s super cool. Imagine if I could do that,’” Rouse says.

She could be the right leader at the right time for Central. Rouse was a part of racial justice protest marches in Phoenix during the summer and packed a lofty agenda for her return to Iowa last fall at a time ripe for change.

“I feel like we need to use this momentum and get what we can out of it,” she says. “It’s been an overlooked issue because we’ve just been comfortable where we are. Yes, we were OK, but we can be better.

“I just want there to be a more welcoming environment, as well as more minority students in leadership areas.”

She wants to model that.

“I want to be somebody who can show it’s not impossible. Just because there’s not a lot of us doesn’t mean you can’t,” she says.

“It’s really all of us that need to change,” she says. “I’m not trying to point fingers, saying that this is an issue because of you. No, these have just been issues and we’re highlighting them. We’re not trying to demonize anyone or victimize anyone. It’s more just how can we come together so everyone feels good together.

“It’s going to take having difficult conversations and being aware of how you think and how you’ve interacted with people. It takes all of us.”

Rouse found the spotlight when one of her Instagram posts was used by the NCAA in its Division III Twitter feed highlighting the issue in June 2020.

“Something we say in my house is ‘always have black girl joy.’ When something is hard or people are trying to bring you down, don’t ever let them steal your joy.” – Yana Rouse, @CentralDutch #BlackLivesMatter pic.twitter.com/ixdg7184Lb

“I was very excited to see it,” Rouse says. “I felt grateful that they’re really highlighting this issue, and they’re supporting their minority students within the sports.”

In the post, she referenced “black girl joy,” a reassuring phrase for Rouse and her sisters.

“I guess it’s just living in your truth and being happy with who you are,” she says. “As a Black female in America, it’s definitely harder to love yourself with society’s standards. People can try to take you down, and situations can, but never let that steal your joy. Always have joy in all the things you do.”

Athletics drew Rouse to Central from 1,500 miles away in Arizona after being recruited by Associate Head Coach Joe Dunham. But Central is so much more to her.

“I know athletics is what brought me here, but I feel like being a student comes first,” she says.

Rouse sees track and field as part of her education.

“Track allows me to have an outlet,” she says. “When school is hard or life is hard, I can just go throw. I can be with my friends. These people are like my family. I just love my coaches and I love my teammates.”

Rouse’s highest finish during the 2019-20 indoor season was a modest ninth-place effort in the shot put. Yet she makes an all-America impact on her teammates, Sturman says, such as American Rivers Conference indoor weight throw champ Kennedy Morris ’22, who Rouse calls her best friend.

“The best part about Yana is her presence with her personality,” Sturman says. “She’s a leader and a support and has a positive attitude with everything. She wants to give her best all the time and she does a lot. It’s really good to have her on the team.”

Rouse sets the tone in workouts as well. She’s more likely to find rewards with a back squat in the weight room on a Tuesday afternoon than in a shot-put heave in a meet on Saturday.

“I like the physical aspect of it,” she says. “I like to work out and it’s something I do pretty well, so lifting weights is something I really enjoy.”

That has translated to steady progress as a thrower, Sturman says. “The weight room is her jam,” he says. “She really loves lifting and she continues to get better (as a thrower). I think this year would have been really interesting to see what she could have done outdoors, but obviously, that didn’t happen.”

What Rouse does away from the throwing cage on campus is even more inspiring to her teammates. “I think it definitely is awesome to see that and it helps bring our team together,” Sturman says. “One of my goals coming here was to make sure that we were more diverse and open. It’s great to have someone like Yana be a leader for that.”

Sturman says Rouse is evidence that athletes can compete for a top program without surrendering a chance to experience life beyond the A.N. Kuyper Athletics Complex.

Central and Division III “just create that better balance,” he says. “We definitely have national-caliber athletes, but at the same time, those kids are making a difference in the world. The best part about it is they can have that balance and they don’t have to worry about putting one over the other.”