As he routinely navigated his way through Central College’s H.S. Kuyper Fieldhouse hallway, carefully stepping through the gauntlet of athletes’ legs and heating pads blanketing the floor outside of the athletic training room, Athletics Director Eric Van Kley had a recurring notion.

“I thought, ‘I can’t be the only one who thinks this is a bad idea,’” he says with a wince, recalling his early days on the job in 2012. “We weren’t doing a very good job of serving our student-athletes.”

Central’s 20-sport athletics program had outgrown its space. When P.H. Kuyper Gymnasium opened in 1969, the college offered eight varsity sports for 202 athletes, all males. Some 50 years later, the Dutch had more than 700 athletes, little additional locker room space and an aging infrastructure with numerous code violations.

Van Kley was right. He was not the only one who sensed the urgency for an athletics facilities facelift that could help the college better provide today’s students the kind of experience so many graduates treasure. President Mark Putnam, forward-thinking trustees Pete Cartwright ’82, Vern Den Herder ’71, Harry Smith ’73 and Tom Koos ’86 and many others saw the need was real and the time was now.

“More than half of our students compete in sports, and I just knew upgrading these athletics facilities was important if we want to keep the great coaches we have and if we want to continue to attract the kind of young people who want to play and learn,” Smith says. 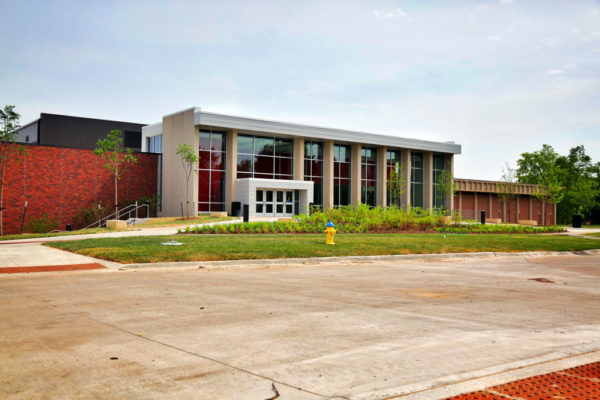 In the first phase of the $18 million Forever Dutch® initiative in 2017, P.H. Kuyper Gymnasium was expanded and received an exterior facelift.

The multi-million Forever Dutch® initiative to expand and renovate the A.N. Kuyper Athletics Complex is among the largest capital projects in the college’s history and the most ambitious for Central athletics. While future facility needs remain, particularly for additional practice and competition space, the project addresses many of the department’s most pressing concerns.

Now, with funding secured and approval received to begin the third phase of construction remaking the building’s second floor, it’s cause for commemoration and celebration of the success of Forever Dutch.

“It’s amazing,” Van Kley says. “There’s a whole new energy to this place. You can see it in our student-athletes and coaches and you can tell even visitors sense it.”

Count volleyball coach Jeanne Czipri among the energized. Before she began telling prospective students about Central, the college first had to recruit her and convince her this was the place to build her volleyball dreams. Previously an NCAA Division III tournament coach at Dominican University (Illinois), the Chicago-area native was a bit reluctant when she pointed her car west for an interview. And with each Interstate 80 cornfield she passed, she became more convinced she belonged back in the city. Then she arrived on campus. The construction excited her. The people sold her.

“To see a college doing this kind of construction was really impressive to me,” she says. “That says a lot about the school.”

But there was more.

“I absolutely fell in love with it here at Central. The people here are just special. They genuinely care about each other. I now have recruits tell me they feel the authenticity of the community and the atmosphere. The people here want Central to be a special part of their lives,” she says. 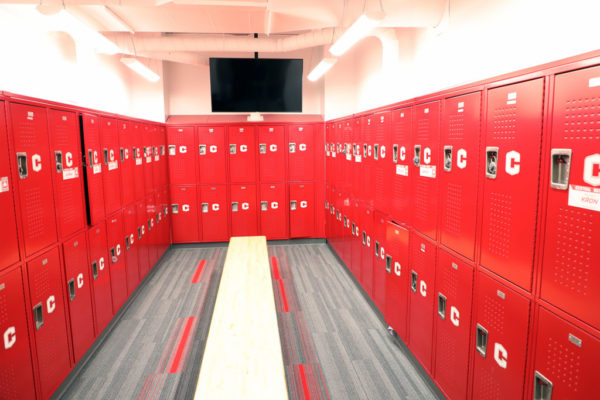 A longtime leader in women’s athletics, Central provided another affirmation of the Dutch women with the expansive new locker room that opens this year.

“Our players are absolutely loving it,” Czipri says after a sneak peek. “It just shows the commitment of our alumni and supporters that athletics is such a critical part of the student-athlete’s experience here and that athletics and academics both can have such an impact on how they develop in their four years here.”

Women’s basketball forward Payton Rogers ’21 is eager to have her team move in.

“It’ll be nice to have our own space that we can just call our little hangout,” she says.

The vibe Czipri felt from the construction has a similar impact on prospective students, Football Coach Jeff McMartin ’90 says.

“We talk about always getting better as an athlete, about always trying to improve,” he says. “Guys are getting stronger and faster every year. And I think athletes who visit, they understand that about the culture here. And they want to see that same thing in our campus and in our athletics facilities, that they’re always getting better, that they’re always improving.”

“The new locker room is one of the reasons I was so intrigued by Central when I was getting recruited here,” he says. “It’s a really nice addition. It’s been so nice for meetings and for just hanging out with teammates before or after practice.”

Officially launched in early 2016, the Forever Dutch fundraising and building plan was formulated in 2013.

Initially, some outdoor projects in the A.N. Kuyper Athletics Complex were completed and key college supporters were quietly briefed. A steering committee was assembled, guided by tri-chairs Cartwright of Urbandale, Iowa; Dennis Hanson ’07 of Norwalk, Iowa; and Molly Parrott ’02 of Ames, Iowa.

The pivot point came shortly after the launch. As has happened at so many critical junctures in the college’s history, the family of Pella Corporation founder P.H. “Pete” Kuyper stepped forward. Kuyper’s descendants and their family foundations teamed for a record $4.2 million lead gift for the complex that bears the family name.

The driving force behind the family gift was M. Joan Farver, daughter of P.H. Kuyper, a former Pella Corporation chair and longtime Central trustee. Farver died in February 2017 at age 97. The new building entrance atrium was named in her honor. Family members shared that in her final days, she asked to be driven by the entrance as it neared completion and smiled approvingly when she peered through the car window, seeing the atrium’s walls bursting with a bright Central red. 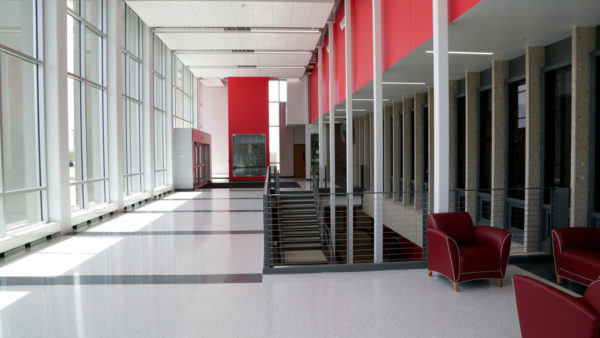 The M. Joan Farver Atrium provides a welcoming entrance to P.H. Kuyper Gymnasium and recognizes the legacy of the Kuyper family, which provided a record $4.2 million lead gift.

Four years after the announcement, the gift’s impact remains staggering and Farver’s memory is cherished.

“For more than a century, the history of Central College and the Kuyper family are tightly intertwined,” Putnam says. “The family’s impact is felt in all areas of campus life and always with the overriding concern of how to best improve the lives of the students who come here. But there’s always been a special affinity within the family for the stewardship of this building. Joan keenly felt that. She saw it as a reflection of the family’s heritage and carried a sense of responsibility for maintaining that. It is fitting that her name is now a part of the building as well.”

Adding fuel for the initiative’s stretch run was a powerful gift from Curt ’88 and Mary Holden Blythe ’90, as well as impactful contributions from several others.

The improvements are game changers. The new wrestling center is more than double the size and able to handle Central’s squad of 40-50 wrestlers once a post-virus world commences. The men’s and women’s locker rooms are equally expansive and can better support the explosion in Central roster sizes. The spacious Pacha Family Lounge and Chip Griffith ’92 Student Lounge allow for post-event team gatherings and recruiting functions.

Enhancements also were created through efficiencies.

The athletic training room was gutted and is more functional, without adding any square footage, and the addition of treatment stations in the new locker rooms reduces overcrowding. Likewise, the weight room in the Ron Schipper Fitness Center features recessed lifting platforms, providing more useable floor space. A former racquetball court was split into two levels, creating much needed storage for the equipment room downstairs and assistant coaches’ work stations on the upper level. The former wrestling room was converted into a golf/baseball/softball hitting center, which was made possible by Dave ’61 and Ardie Pals Sutphen ’64.

Student-athletes in each of Central’s 20 sports are taking advantage of the new spaces. Forever Dutch also is providing an emotional boost, as well as an ongoing challenge for the future.

“We need to continue to be on the forefront when it comes to facilities and how we train,” McMartin says. “This speaks to both of those areas. Not only will it help us train better, but it also is going to reinforce the fact that we are going to continue to improve in every aspect of what we do.”

It’s a clear Dutch victory. A chapter of athletics fundraising is successfully completed. And the renovation and expansion work have prompted a transformation at Central, not just in facilities but in a spirit that transcends athletics. The phrase Forever Dutch, initially seen as a fundraising tagline, has morphed into a mindset, a way to articulate the deep-seeded passion and loyalty Central students and alumni feel for all things red and white.

“It’s just being a part of the family that we’ve created and continually grown,” Smith says. “It’s a big family we grow close to over the four years and hopefully will stay close to after we leave Central.” 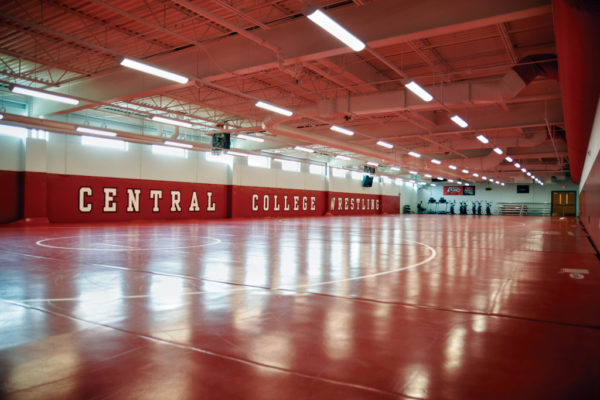 The new wrestling center in P.H. Kuyper Gymnasium is nearly triple the size of the previous team practice room, accommodating a roster that has grown to 40-50 wrestlers.

Improvements Made Possible by the Forever Dutch Campaign

The $18 million Forever Dutch® initiative launched with a $12 million building expansion in 2017. The second $3 million phase to the lower level, which includes a new women’s varsity locker room and a transformed athletic training room was complete in Fall 2020. Construction is currently occurring on the $3 million third phase of the building’s upper level and is scheduled to be completed in April of this year.

One of Central’s most faithful partners came up big once again through a major gift to the Forever Dutch® initiative to renovate and expand P.H. Kuyper Gymnasium.

The Central Club, among the nation’s oldest small-college booster organizations, in Fall 2020 committed $150,000 to the next phase of the project. The gift is designated for new custom flooring and equipment for the Ron Schipper Fitness Center. The surface will be more forgiving, eliminating the raised 4-inch platforms that engulf a large section of the facility.

The 7,200-square foot facility opened in 1999, named in honor of College Football Hall of Fame Coach Ron Schipper, who guided the Dutch from 1961-96.

Thanks To the Real MVPs

Central College has surpassed its fundraising goal to renovate and expand the college’s athletics facilities. With all funding secured, the college is on course to complete approximately $18 million in expansion and renovations by April 2021.

“We are so grateful to the 2,712 alumni and friends of the college who have given thoughtfully and generously to help us finish this project for our students and coaches. It saw the most donors for any one project in the college’s history,” says Sunny Gonzales Eighmy ’99, vice president for advancement. “Time and time again members of the Central family have demonstrated steadfast support for the college and our students. We send our deepest thanks for their confidence in Central and trust in our mission. Through their generosity, we are able to elevate the student-athlete experience here now and well into the future.”