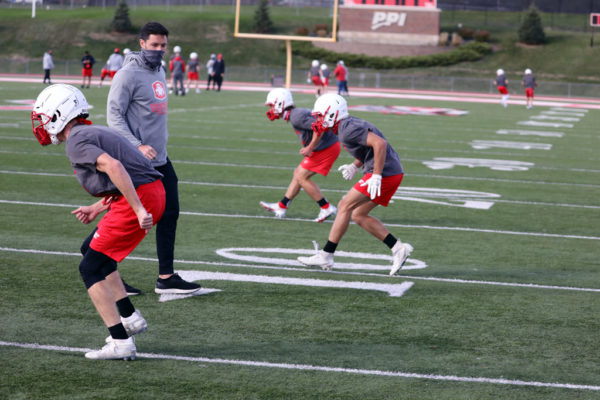 Football practice at Central in a pandemic meant face masks and small-group workouts, like Assistant Coach Austin Mercer put his cornerbacks through.

Not surprisingly, Mackenzie Biggs ’24 was on the golf course when she got the news.

Golf is Biggs’ oxygen. As summer melted away there was a drip-by-drip flow of NCAA Division III conferences announcing postponements and cancellations of fall sports seasons due to COVID-19. Biggs began having second thoughts about her decision to enroll at Central, where it appeared her freshman season would surely meet a similar fate.

Between shots in a women’s league match at her home course — Crestwicke Country Club in Bloomington, Illinois — Biggs’ mother glanced at her phone and burst into a broad smile.

“Mackenzie, you’re getting a season,” she told her daughter.

“I was like, ‛No way, I can’t believe it,’” Biggs says. “We’re actually going to get to play and I get to have my freshman year. I was just jumping for joy. I was so excited. I wanted to get off that golf course and find someone else to tell.”

The simultaneous reaction was decidedly different across the state in Aurora, Illinois, where Dutch offensive lineman Joshua Mayhew ’21 was at home with his family. Like Biggs, Mayhew was braced for crushing news when Football Coach Jeff McMartin ’90 began a team Zoom meeting. But for Mayhew, it was what he feared. While Central proceeded with modified men’s and women’s golf, men’s and women’s tennis, triathlon and men’s and women’s cross country fall seasons, the Dutch football, volleyball and men’s and women’s soccer seasons were postponed until spring.

“My mom was sitting right there with me on the call and it wasn’t a big heartbreak because I figured it was coming, but I was still pretty bummed out,” Mayhew says.

And so it’s been for Central athletics amid a global pandemic, a mixture of triumphs and setbacks but not the kind that can be proclaimed in bright lights on a scoreboard in this most surreal of fall seasons, the first without Dutch football games on campus since 1919.

Even for those teams competing, the seasons were anything but normal. Remaining safely physically distant and isolated while conducting sports intended for close contact accompanied by large-group gatherings was more than just a logistical problem for college officials. As with so many issues surrounding the virus, there were far more questions than answers.

Expertise and advice came from all corners, most directly from the college’s COVID-19 Athletics Protocol Task Force comprised of medical and health professionals. It helped assemble lengthy policies and procedures. An even heftier “Resocialization of Collegiate Sport: Developing Standards for Practice and Competition” manual came from the NCAA.

Student-athletes’ health and well-being were the overriding concerns throughout and the spring shutdown prompted student-athletes and coaches to ponder the fundamental question: “Why do we play?” It spawned a new passion for sport. “I think the players are appreciating every day we get decent weather and go out and practice,” says Softball Coach George Wares ’76. 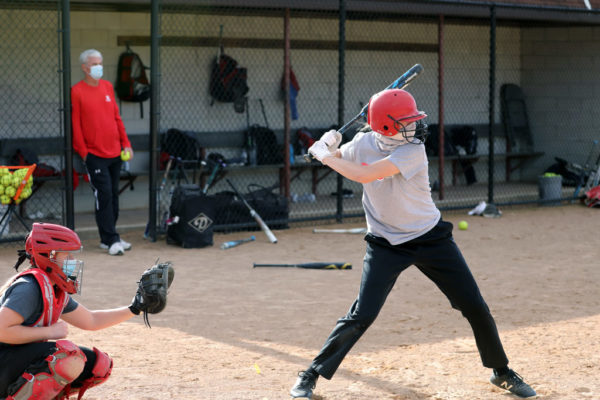 The 2020-21 season is unlike any of the 36 campaigns that preceded it for Central’s NFCA Hall of Fame Coach George Wares ’76, who watches a masked Taryn Hintz ’24 take a cut in a small-group fall practice.

Many tried to avoid thinking about a wide, wide world without sports.

“I can’t imagine being at Central and not playing basketball,” says women’s forward Payton Rogers ’21. “Basketball has taught me a lot of things, even beyond sports. It’s made me mature a lot.”

To Van Kley, it became clear the opportunity to compete was a key component in student-athletes’ overall well-being.

“As we weighed the health risks of competing this fall, we also looked at the less obvious dangers of not playing,” he says. “There’s actually a lot of data out there on the importance of athletics in student-athletes’ personal development and emotional health.”

Thus, as Division III leagues nationwide began pulling the plug on fall seasons, Central’s American Rivers Conference forged cautiously ahead. Only when the NCAA mandated frequent testing for high contact-risk sports — not only unaffordable to most Division III schools but logistically vexing — did league schools opt in August to postpone four sports to the spring.

Hovering over the winter and spring seasons is the same uncertainty that shadows the world as it parries with its invisible foe. The league hopes to launch abbreviated winter seasons after Jan. 1. Round-robin spring conference schedules are taking shape for men’s and women’s soccer and volleyball, while a three-game football season is envisioned.

Some Central athletes already are looking beyond this year. Last July, in an attempt to add some certainty where little exists, the NCAA offered a blanket waiver to students in sports that play less than 50% of their maximum allowed contests, providing an extra year of eligibility. Among those taking an immediate hard look at that option are members of Central’s football squad, which had lofty expectations coming off last year’s Division III playoff run. Early talk last summer about a compromised fall season held little appeal.

“A couple of us were thinking that if we just get to play a conference schedule with no playoffs, I don’t know if that’s how I want to end here,” Mayhew says. “So that’s when I started to say, ‘Who do I need to meet with? What things do I need to know before I start making these decisions on if I’m going to play next year?’ It was kind of cloudy for a lot of people, but I think we have a majority of my senior class coming back.

“It’s been a lot of work by a lot of people to get where we were last year and, kind of in a metaphorical sense, we want to roll the ball farther than that. And I want to be a part of it.”

For varied reasons, others may not have that choice.

“A couple of (women’s basketball) teammates and I were talking last week and it’s sad to think we don’t know if we’re going to get that senior season,” Rogers says. “Our last game last year, we lost that conference tournament game against Luther and I thought, ‘Well, yes, that stinks, but I have one more season.’ And now it’s hard to think that if things don’t get any better, that could have been my last game. You get that worst-case scenario stuff in your head, but that’s why we’re just trying to build each other up and hope for the best.”

Those who did finally get to compete savored the taste.

“It felt awesome,” women’s cross country standout Mari Stein ’22 said after the team’s first race Sept. 12. “The whole team was just super excited to be here. There was a lot of adrenaline.”

Those competing still had to navigate pandemic athletics, free of team huddles and reflexive high-fives, with safety protocols that were countless and sometimes awkward. Instead of the 10- or even 20-team meets cross country teams are accustomed to, they instead staged a series of triangulars with league foes, widely separated for what formerly were mass starts.

Golfers no longer engaged in side-by-side conversations walking down fairways. Rakes vanished from bunkers and cups on greens were off-limits to all but the golf ball.

“At Luther, we had these little handles that allowed you to put your putter on the pin and it would pull the ball right out of the cup instead of you reaching down,” Biggs says.

Overnight trips were curtailed and teams traveled in larger vehicles to allow masked athletes to more safely spread out. 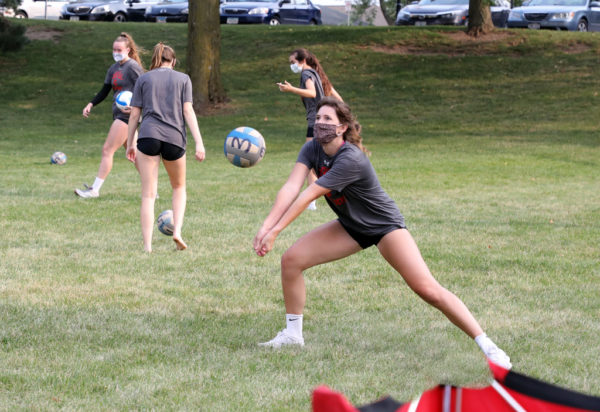 The need to remain physically distanced forced the Central volleyball team to send small segments of its squad to locations beyond P.H. Kuyper Gymnasium, even outdoors, where Krissa Larson ’22 got some early fall season practice.

The postponed-sport athletes, along with those from winter and spring teams, proceeded with workouts, but they were brief and tightly structured. In some high contact-risk sports, they were initially prohibited altogether. The college’s new wrestling center, typically home to numerous offseason hand-to-hand struggles, was locked. Basketball was initially limited to outdoor courts. Later, hoops in P.H. Kuyper Gymnasium were lowered but only for shooting. Even one-on-one games were banned.

Massive team weight lifting sessions and side-by-side cardio workouts were prohibited in the Ron Schipper Fitness Center, which was limited to a small number of distanced, masked athletes, with each set of squats and lifts followed by a round of equipment disinfecting. Drinking fountains were out, hand sanitizing dispensers in. Strength and Conditioning Coach Kyle Johnson ’02 was encouraged by the response.

“Our student-athletes have been even better than expected as far as attitude and willingness to compromise while still doing things to feel like they’re making progress in their development but staying safe,” he says.

If one squints, a few benefits to the disrupted routines are visible.

“I think a lot of people are really doubling down on training and eating properly,” Johnson says. “They have had more time on their hands to think about this and do these types of things. A lot of our kids are in the best shape of their life, just because they’ve really had the time to train more than they normally would.”

“Smaller groups have allowed us to individualize things more and probably give more attention to details than we normally do,” he says.

Extra time was devoted to skill development. Mayhew notes there’s much to offensive line play beyond hitting the other guy.

“It’s been kind of a blessing because a lot of freshmen come in thinking all they need to worry about is the physical game, but there’s so much more of the mental game and footwork in the offensive line that people don’t realize,” he says. “It’s a real positive to have the offensive line coaches be able to kind of put a microscope on everyone and fix every detail before we even put on the pads. A lot of people are learning more, we’re just learning differently than we have in the past.”

Certainty remains in short supply. So as many must do in life, Central athletes are making the best of a historically bad situation.

“None of us knows the plan; we’re just kind of playing the cards we’re dealt,” Mayhew says.

And the Dutch are still finding ways to enjoy the ride.

“The word for the team this season is opportunity,” men’s cross country runner Caleb Silver ’23 says. “Just be grateful for what we do have, the opportunity to race and to be together as a team.”