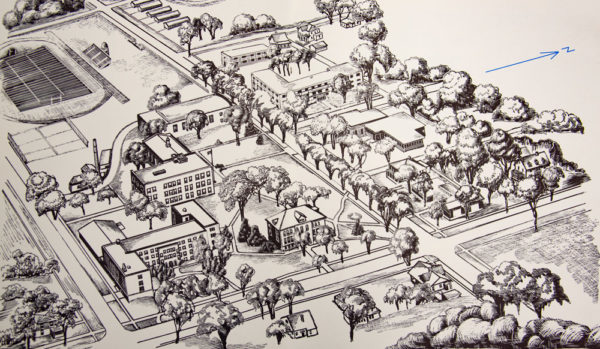 Central’s campus was originally divided by Peace Street, which runs from top left to bottom right in this 1959 campus rendering.

The Central College campus always has been a work in progress. That’s more so than usual this spring when the college will create a new, thoughtfully landscaped history garden as a part of a renovated Peace Mall in the center of campus.

Much of the area between the chapel and pond will be completely transformed. A new amphitheater will host outdoor events. Fourteen memorials will honor the college’s veterans and themes in Central’s history. Plantings and a sinuous walkway will promote strolling and reflection.

It’s the most significant alteration to campus landscaping since the Peace Mall and pond were constructed 55 years ago. [See “Lubbers’ Lagoon,” below].

Gaard remembered Civil War and World War II memorials were on display in Central Hall when he was a student. “I came back a few years ago and the memorials were in storage,” Gaard says. “I suggested putting them in a prominent place to both honor veterans and to enhance the campus aesthetics.” 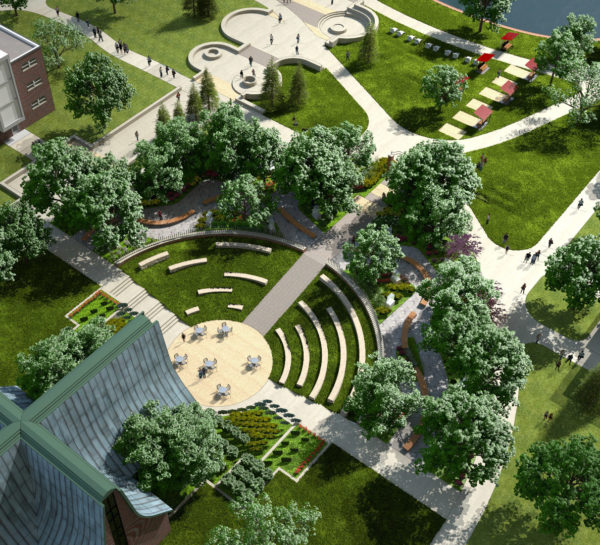 That suggestion has morphed into a history garden—a landscape celebrating not only the college’s veterans but also significant moments and meaningful themes in Central’s history. The 100 percent donor-funded project was designed by RDG Planning & Design of Des Moines with input from project lead donors, college leaders, Lori Witt, associate professor of history, and Brian Roberts, professor of art.

The east entrance to the history garden passes through “Sentinels,” a memorial honoring Central’s veterans.

Steve De Cook ’65, one of the project donors, had a great-grandfather who fought in the Civil War in Company G 33rd Iowa infantry, which consisted mostly of Pella men. Many had immigrated to America in the 1840s and 1850s and spoke little to no English. They wanted to show loyalty to their new country, and many died in the process. De Cook’s grandfather enlisted in the fall of 1862.

“There were only two boys enrolled in Central College for a while,” De Cook says. “All the rest served at the beginning of the Civil War.”

“I HOPE PEOPLE DON’T FORGET. I HOPE THE MEMORY STAYS ALIVE AND THAT THROUGH THIS HISTORICAL GARDEN AND VETERAN’S MEMORIAL, THE COMMUNITY WILL IDENTIFY THOSE WHO SERVED—PERHAPS THEY’LL FIND MEMBERS OF THEIR OWN FAMILIES—AND REMEMBER THE SACRIFICE THEY MADE FOR THIS COMMUNITY AND THIS COUNTRY.” 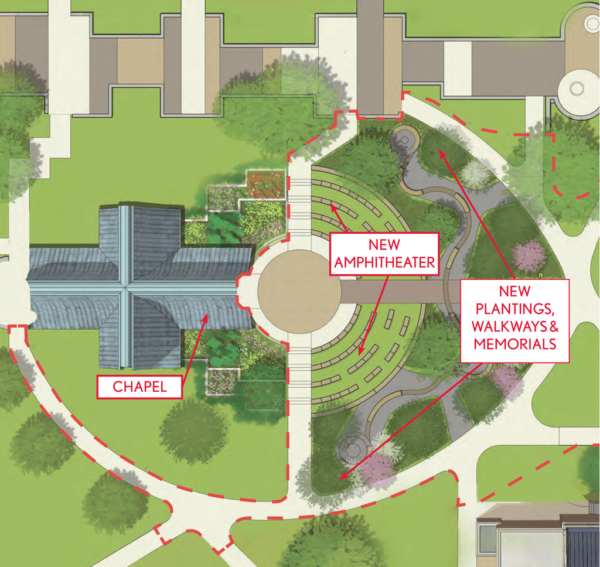 Fourteen markers throughout the garden will denote important moments in Central’s history from the college’s founding in 1853 through many years in the future. To date, 11 such moments have been identified, each with a themed word to describe them. Three more markers remain unnamed for now, leaving room for future decisions or three additional moments possibly yet to occur.

The names of the 11 identified markers, along with the historical moment they honor or celebrate, are: 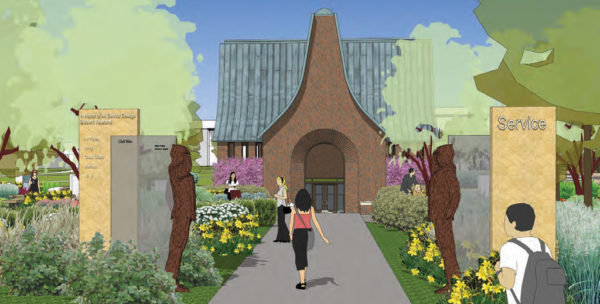 The “Sentinels” Veterans Memorial will mark the east entrance to the history garden. The weathering steel cutouts flanking the path honor uniformed servicemen or women of the five branches of the United States military.
Illustrations by RDG Planning & Design. 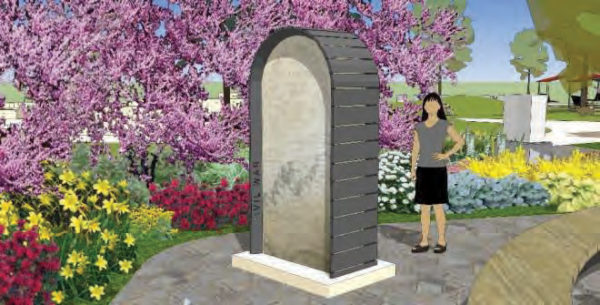 This tablet honoring Central’s Civil War dead was one of those that inspired Tom Gaard ’61 to propose new landscaping to honor Central’s veterans. Historical and thematic markers will dot the new landscaping, offering places for visitors to pause and reflect. 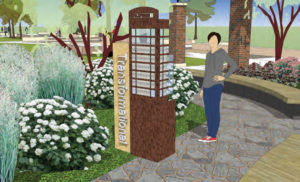 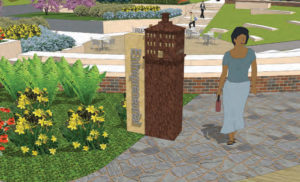 Like “Sentinels,” most markers will be constructed of weathered steel cutouts and limestone tablets.

“It’s appropriate and respectful to honor the past as we prepare for the future,” Central President Mark Putnam says. “The markers articulate the values that founded and continue to guide the college and characterize its graduates.”

Putnam notes the Peace Mall renovation is 100 percent donor-funded. More than $850,000 has been raised toward the project to date. In addition to Gaard and De Cook, significant donors include members of the board of trustees in honor of board chair emeritus Lanny Little ’74, the Class of 2018, gifts from estates and anonymous donors.

For more information or to donate to the history garden:

Where it all began.

In 1963, “We wanted to make the campus more distinguished,” recalls then Central College President Don Lubbers in a 2015 interview. “We contacted a landscape architect in Des Moines and he came up with a lake in the middle of the campus. Whoa— that was shocking! It required closing Peace Street, and the City of Pella agreed.”

Meanwhile, said Lubbers, “My wife and I and our kids went to New Jersey for a little holiday and fundraising. I got a call from the business manager and heard people were in an uproar. Fortunately for me, I was a thousand miles away. I said just take the criticism, and it will work out all right.” 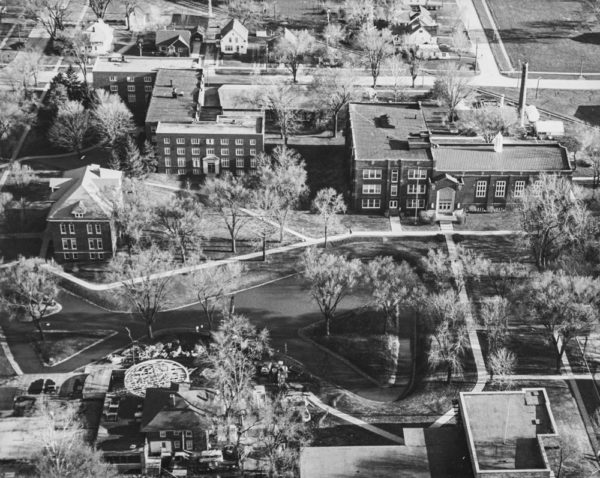 The original version of the pond was in the shape of two triangles joined at their apexes, contained three islands and lacked a way across. This photo was taken in the early 1970s.

So it did. Pella residents who at first chafed at the inconvenience of having to drive around campus rather than through it were charmed by the more unified campus and picturesque pond. Centralians and community members soon became fond of strolling around and gazing at the water feature, particularly when ducks, geese and even turtles arrived. Students affectionately dubbed it Lubbers’ Lagoon.

Twice a year the pond hosts the college’s most distinguishing rituals. In Homecoming’s Lemming Race, costumed students throw themselves into the water and thrash their way to the pond’s island. During the Spring Fling Boat Race, improvised, student-powered crafts battle it out to see which can circumnavigate the island fastest.

Like the pond, the history garden is designed as a focal point for strolling, gazing and reflection. But who knows what new campus rituals the amphitheater and other elements may host once ingenious students make the new features their own? 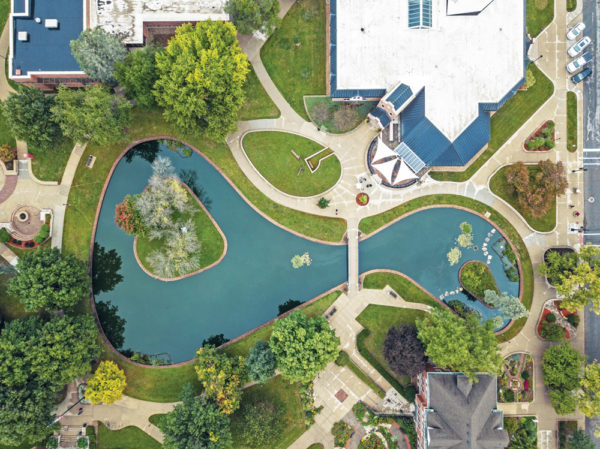 A drone’s eye view of the campus pond on a glass-calm day.
Photo by Andrew Gorman ’19