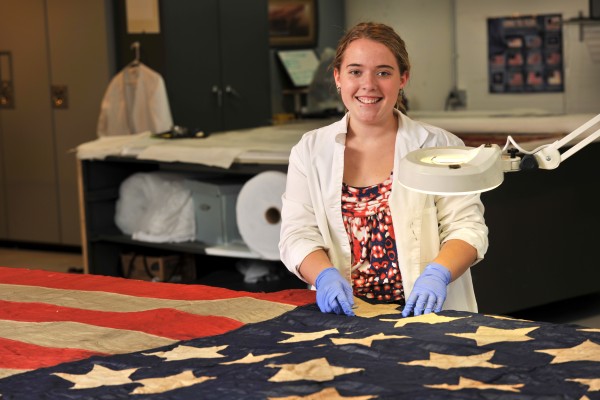 Katie Zellmer spent the summer on the small scale—using micro-vacuums and microscopes to clean and conserve at WWI flag that was flown in an artillery training camp in France. She even lifted a fingerprint off the finial—the ball at the top of the flagpole.

“I loved being part of history, rather just learning about it,” says the junior history and cultural anthropology major. “I actually took a flag and made it so other people can enjoy it.”

The Battle Flag Lab at the State Historical Society in Des Moines, where Katie interned, owns more than 350 flags dating from the Civil War through World War II. Katie was given a flag of her own to spend the summer conserving, using wedges and suction to remove dirt. She was also responsible for documenting every flaw—from tiny rips to miniscule dots. She even tested small pieces of fiber to find out what material it was made from. (Her flag was machine-made silk with cotton thread.)

“I learned a lot about conservation work,” she says. “I started completely from scratch with one flag and did everything with it.”

Her time at the museum was also a boon for her other major. There, she met an archaeologist who invited her to excavations of unmarked grave sites around Iowa from the Civil War era.

Katie is grateful to her history professors, Michael Schrier and MarkBarloon, for telling her about the internship and encouraging her to apply. Not only did she help to conserve a part of history, but she learned what it’s like to work in a museum. After graduation, she hopes to become a museum curator and design exhibits for a large institution like the Chicago Field Museum.

In pursuit of that goal, Katie labored down in the basement of the museum, squinting through a microscope and filling out reams of paperwork, until “her” flag was ready to be displayed again.