While at Central I was able to continue playing soccer, although it was not a popular sport when I arrived. We had a Central team, but there were no tournaments to compete in. I also played indoor soccer while at Central, but with only a brief small tournament.

Central College was a wonderful place to study, make friends and enjoy college life. My years at Central were awesome and I have many great memories of my time there. My freshman year I had the opportunity to stay as a guest at the Phi Delta Tao fraternity house. Even though I never pledged, I had some great times with the guys. Later, when I moved into the dorms, I had great times with the friends I met there. Going to Central is forever an experience I would not change. I strongly recommend for current students to enjoy their stay and study hard.

I had some great professors at Central, but the ones who stand out are: Larry Mills, one of the best and a kind person. Norm Ryerson, whom I used to call my second dad. Rod Camp, a great professor who knew more about Mexico than Mexicans. And, Schulze – my favorite “psycho” teacher.

I met my wife, Marcela, years before we married. When I first tried going on a date with her, she had a boyfriend and I was still in college. After a few years, we met again. By this time, we were both divorced, so we gave it a try and now we’ve been married 23 years. It was met to be. We have four wonderful kids, Maria Christina (27), Christos Elias (26) and Louis Andreas (24) and Carolina (25). We also have five wonderful dogs we adopted from the streets and I can say they are the best pets we have ever had. In the past we raised dogs we had purchased, but the dogs from the streets are very grateful and are fun to have around.

My late father founded his seafood export business in 1957. When I joined the business in 1986, I became the second generation in my family to do so. Even though I live in Merida, I spend a lot of time in Ensenada, Baja, California, where beginning in 2009, I have had the opportunity to process seafood. My hope is for people to eat healthy.

Two books I have read and highly recommend are Treblinka by Jean-Francois Steiner and Simone de Beauvoir and Tom Sawyer by Mark Twain. I have played drums since I was seven-years-old, and music continues to be my hobby. I enjoy going to the beach and boat rides with family and friends. Good music, good company is as good as life can get. We all go through great, bad and average times. Whatever you do, do it with your heart and remain positive, life goes by in a second . . . enjoy it!

I have not been back to Central in all these years, but I might consider returning for my 35th class reunion in 2020. In the meantime, I would love to communicate with my Central friends, who I have lost contact with. You can find me on Facebook or email me at louis@lcmegaloudis.com. God Bless you all and Go Big Red!! 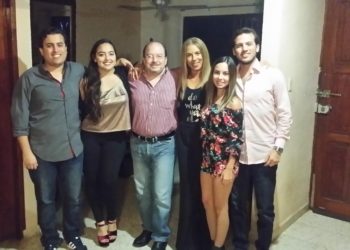