Central College hosted proud families and friends Saturday, May 14, during the 2022 Commencement ceremony. Along with the announcement of each of the 216 graduates, the ceremony included a heartfelt and motivating speech delivered by Central alumnus Dean Furness ʼ94. A motivational speaker and data and analytics specialist, Furness received an Honorary Doctor of Public Service honoris causa during the ceremony.

“Walking across the stage today with your diploma is something no one will ever be able to take away from you,” Furness reminded the new alumni. “You will always be able to count on everything you have earned here.”

Furness brought hope and confirmation to Central graduates, reminding them to keep moving forward as they achieve and accomplish more goals after graduation. Two promising graduates, each of whom is excited for the future, share details about their time and success as Central students. 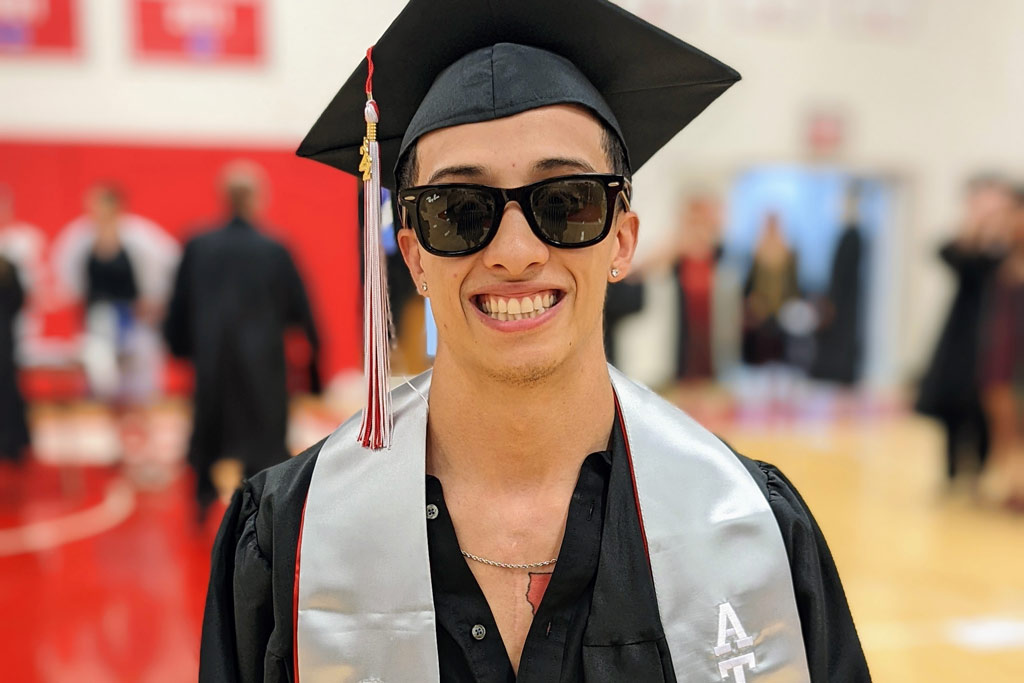 Carlos Posas ʼ22 overcame obstacles early in life, which prepared his heart for a college experience that allowed him to pin a career path after a major reversal. He dreamed of wrestling at a college in Iowa — what he calls “the wrestling state” — since middle school, but he had a hard time imagining himself leaving his home in California.

However, two childhood open heart surgeries to repair leaky valves taught him an invaluable lesson: Wrestling could be taken away at any time. So, when Central recruited Posas to wrestle for the Dutch, his dreams of wrestling in Iowa once again got his blood pumping, and he prepared to take down the competition in the Midwest.

Posas’ love for wrestling only grew during his time at Central. The friendships forged with his teammates on the bold, red mats of Central’s wrestling room have proven to be unbreakable bonds, which have served as constant reminders that choosing Central was the best choice for him.

“The best part of my wrestling experience at Central was definitely the team,” Posas says. “These guys are like my brothers.”

Support from his coaches propelled Posas into a successful wrestling career at Central — and inspired him to continue his wrestling career by investing in the next generation of wrestlers as a coach. 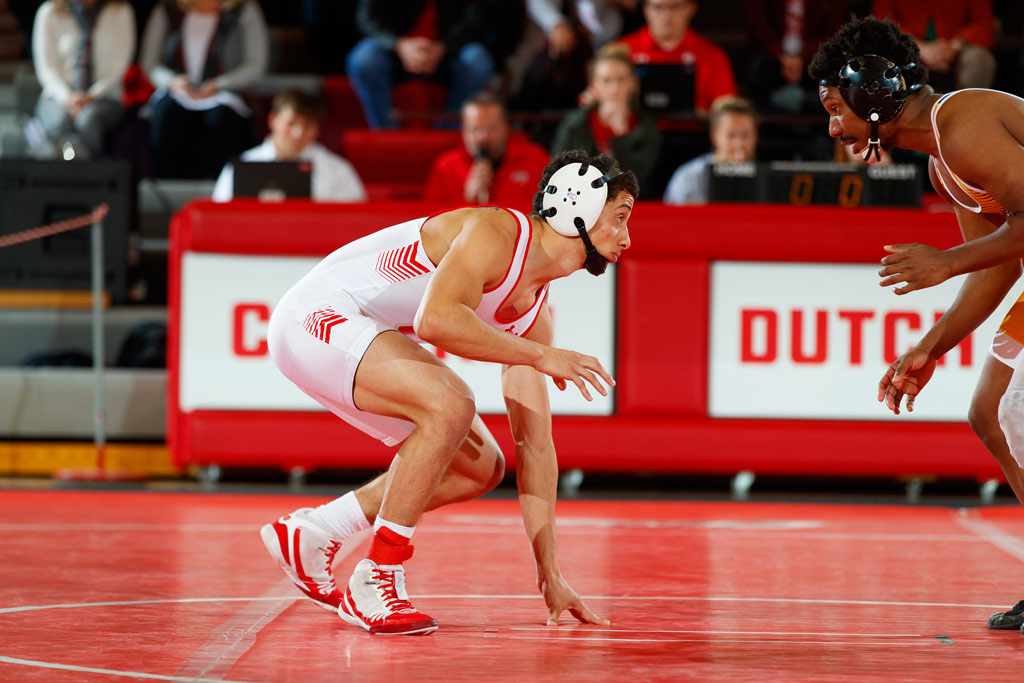 Carlos Posas ’22 never once let fear take over during a wrestling match. This Californian wrestler dominated his duals while in the Midwest.

As many college students experience, Posas wrestled with the many options he could choose for a major.

The unique nature of a liberal arts education allows students to explore many interest areas as they shape their futures around deep-seated dreams and newfound fascinations.

Posas started his first year at Central with a plan to pursue a career in business. The flexibility of Central’s curriculum enabled Posas to find his niche in information systems, which ignited curiosity that fueled his research.

Code of the Next Generation

Posas took to the tech world like a fish to water. His computer science classes at Central equipped him with fresh skills in geographic information system mapping, which is a system that creates, manages, analyzes and maps all types of data.

This skillset allowed him to integrate his research into a service-learning project in collaboration with Pi515, a company that challenges, inspires and teaches technology skills to students with potential, empowering them to achieve success, garner influence and gain stability in their families and communities, according to the Pi515 website.

Posas’ work consisted of fostering computer skills in students and working on a partnering project with Facebook. His heart for young students became apparent when he shared his experience in the classroom.

Posas explored the field of technology and working with young students, an experience unique to Central’s program, which also led Posas to pursue a career in IT at a school in his hometown. Post-graduation, Posas traveled back across the country to work in the IT department of the Madera Unified School District in Madera, California.

The Heart of the Matter

Posas may have traded in his Central-red singlet for a Madera South-purple coach’s polo, but he carries with him a heart full of passion for young students — a fondness he discovered during his time at Central. After years of takedowns on the collegiate mat and perfecting his technical skills, Posas’ experiences at Central make him proud to say he will always be Forever Dutch®.

“Central was a good choice — a great choice,” Posas says. “I love it here. No better experience.”

Read about Carlos’ early years at Central at central.edu/posas. 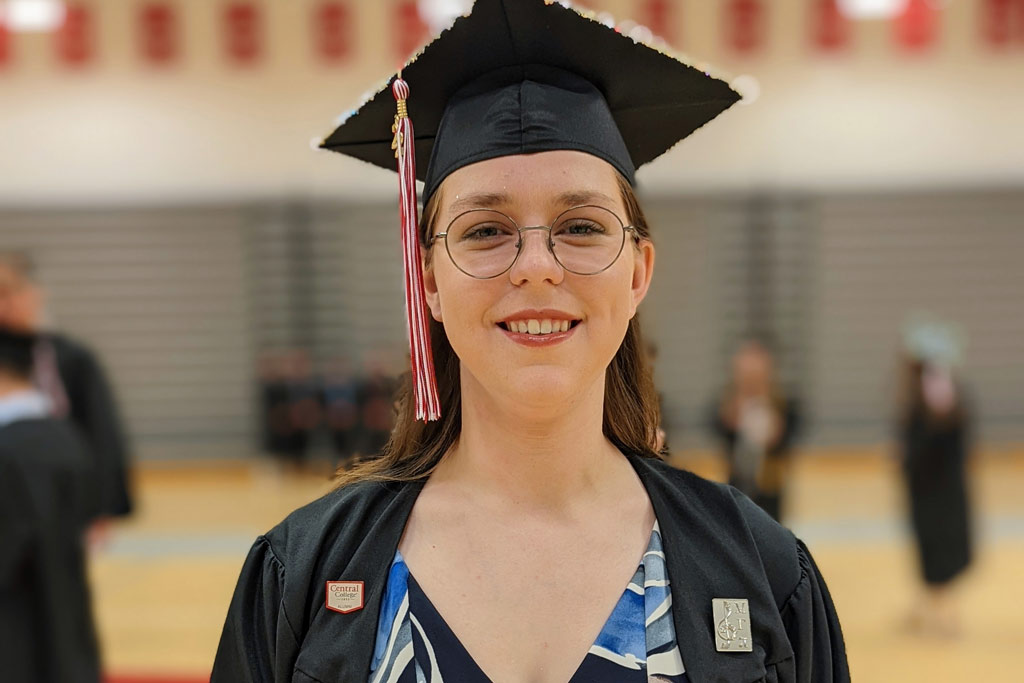 Abigail Lowry ’22 walked across the Commencement stage with more than a diploma. She graduated with accolades of being one of two females in the Class of 2022 to earn an engineering degree from Central — the first women to do so since the program’s inception in 2015.

“The opportunity to be distinctive in engineering classrooms has given me a foundation of confidence and drive as I move forward toward the workforce,” Lowry says.

From being a teaching assistant and mentor in the classroom to being taken under the wing of her female engineering advisor, Liz Golovatski, associate professor of physics, Lowry’s Central journey equipped her with the tools and skills necessary for her pioneer journey as a female Central engineering graduate in the working world. After graduation, she joined the team at Vermeer in Pella as an electrical engineer.

Read about Lowry’s decision to attend Central at central.edu/lowry.