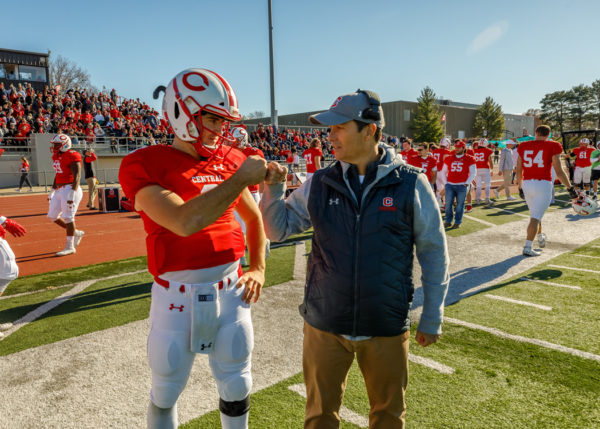 Central won a record 32nd conference championship and made its 22nd NCAA Division III playoff appearance, scoring home-field victories over two nationally ranked opponents before losing in the quarterfinals to No. 3 Wisconsin-Whitewater. Central was 10-0 in the regular season, 12-1 overall and led the nation in nine statistical categories while breaking 61 school records.

Caleb Silver ’23, Will De Haan ’22 and Caroline McMartin ’24 were individual qualifiers for the NCAA Division III Championships on Nov. 20 in Louisville, Kentucky. The Dutch men were fifth in the American Rivers meet but rebounded to take sixth in the 30-team NCAA Midwest Regional. Central’s women were third in the league and sixth in the regional.

Central was 15-13 overall and 4-4 in the conference, tying for fourth and reaching the league tournament for the first time since 2015. Outside hitter Krissa Larson ’22 was named to the all-conference team.

The Dutch climbed to second in the league at 6-2 and were 8-7 overall. Ryun Ferrell and his staff received conference coach of the year honors. Alyssa Lewton ’22 was an all-conference honoree in both singles and doubles. Bronwyn Metcalf ’22 and Maddie Hartley ’22 also were all-conference performers.

Central was sixth in the conference at 3-5 while finishing 9-8-1 overall. The Dutch received the U.S. Soccer Coaches Team Ethics and Sportsmanship Award for the sixth consecutive year.

For an up-to-date schedule of all sports, visit athletics.central.edu/calendar.