An Era of Opportunities

She was a catcher for the Central College softball team and had a doubleheader one cool April day in 1974 at Grand View University.

But there was no team bus.

Coach Gary Boeyink’s instructions to his players were to meet him at the field in Des Moines. “I didn’t have a car,” Freed says. “And I remember my roommate at the time said, ‘Well, I’ll give you a ride up there but let’s go shopping first.’ I was a little late for the game but, you know, it was like, not a big deal.”

Today, the Central softball squad is a perennial national contender. And, while the Dutch aren’t boarding private jets for road games, athletes aren’t forced to handle their own travel logistics.

In fact, Central is a recognized women’s athletics leader, playing an integral role in incorporating female athletes within the NCAA. 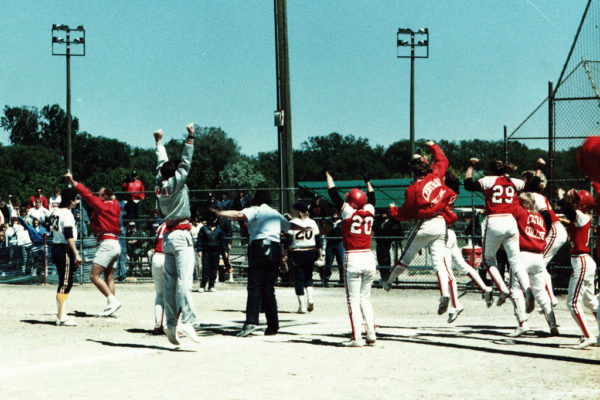 The Dutch captured the NCAA’s first-ever women’s national championship. In addition, 10 of the college’s 11 national team championships were won by women’s teams. But there were some stumbles at the dawn of women’s intercollegiate athletics competition in the early 1970s, which were particularly obvious to those who grew up in Iowa, where girls high school athletics had uniquely thrived for decades.

“I was shocked,” says Freed, who later served on Central’s business management faculty from 1981-2011. “My high school team was better than my college team. I was playing with women on the college team who had never played competitive ball. I had been playing competitive softball since third grade.”

Nearly 50 years ago, Title IX of the education amendments was issued on June 23, 1972, declaring: “No person in the United States shall, on the basis of sex, be excluded from participation in, be denied the benefits of, or be subjected to discrimination under any education program or activity receiving federal financial assistance.” The implications of that legislation are still being sorted out by the courts today but in 1972 it spurred a scramble among colleges and universities to ramp up women’s intercollegiate athletics programming.

Many take justifiable pride in Central’s transformative role in providing opportunities for women to excel in athletics. Yet Central was not the first school in Iowa to launch a women’s intercollegiate athletics program. Still, President Emeritus Ken Weller, the school’s president from 1969-90, insists it wasn’t the legal realities of Title IX that forced the college’s hand. The seeds for the school’s program were sown well before then.

“It was really a matter of I felt we should do it, I thought we could do it and I thought it would be good for women,” he says.

Weller also knew who he wanted to lead the charge.

While on sabbatical at the University of Iowa in 1971-72, physical education faculty member Boeyink ’59 became friends with fellow graduate student Christine Grant. She later served as Iowa’s women’s athletics director and became a prominent voice nationally, along with Bonnie Slatton, who also emerged as a women’s athletics leader. The conversations with these leaders sparked a mission already stirring in Boeyink’s mind.

Boeyink brought that energy back to Central’s campus. When he was called to Weller’s office, he found that he had kindred spirits in the Central president and Ron Schipper, long-time football coach and athletics director.

“Ken saw things the way I did,” Boeyink says.

Women’s club sports were developing then, and former physical education faculty member Thelma Goodwin sped up their development in leading the campus Women’s Recreation Association. The line between club and varsity competition was a bit fuzzy for a few years, but the official launch of Central’s women’s intercollegiate programs was 1973-74. Boeyink served as the school’s first women’s basketball and softball coach. 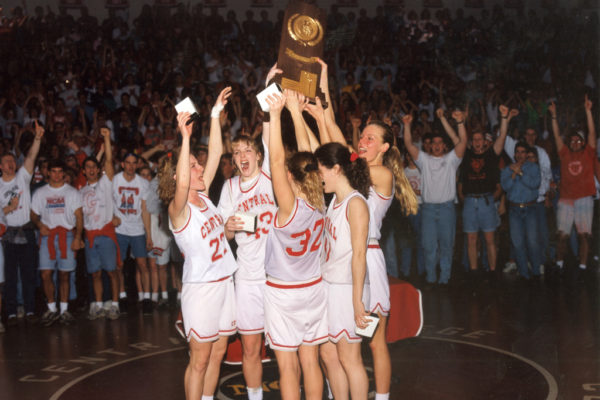 Many women competing at Central then did not see themselves as pioneers. The feeling in other parts of the country might have differed, but athletes from Iowa had grandmothers who had played high school basketball. Competing felt natural.

“To me, it was just like, why wouldn’t I play softball?” Freed says. “I’d always been playing softball.”

Lisa Broek ’83, a national champion sprinter, CoSIDA Academic All-American and NCAA Postgraduate Scholarship winner, had a similar view, coming from Sioux Center, Iowa. She recently retired after serving for 25 years as Director of Health Promotion in the Hamre Center for Health and Wellness at Macalester College in Minnesota.

“I was in high school volleyball, basketball and track and never really thought about it as being cutting edge,” she says. “I didn’t think of it as this transformational time in our nation. It hit me the most when I was at Macalester and was talking to the associate A.D. there, who is probably six or seven years older than me. We were talking about sports and she had never participated in them. And I was like, what are you talking about? And then it dawned on me how lucky I was that I was in an era of opportunity.”

Initially it was a bumpy ride transforming an eight-sport men’s program into a 14- sport program with women. After a 3-13 women’s basketball season, the athletics department’s season report offered an unvarnished assessment: “The team suffered from lack of experience, lack of size and lack of shooting ability,” it moaned.

On the team’s lone overnight trip to Orange City and Sioux Center, the players stayed in a Northwestern College dorm. Freed notes the college didn’t have a softball field, so she had to pedal her bicycle to the east side of Pella to a community field for practice. The players wore blue jeans and matching polyester t-shirts at games. Broek recalls indoor track practices in the gymnasium, with the doors flung open so that sprints could extend into the lobby for baton handoffs.

The struggles were not unique. Many schools, including the largest, tried to gain their footing. Central’s early schedules sometimes included contests with the University of Iowa and Iowa State University that resulted in Dutch victories.

“They weren’t any further ahead than we were and, in some ways, behind,” Boeyink says.

“I strongly wanted women’s athletics to prosper and Coach Schipper did, too,” he says. “We wanted them to share the same advantages and also the same difficulties that the men’s teams faced in those days.” Central quickly began making a name in women’s athletics: 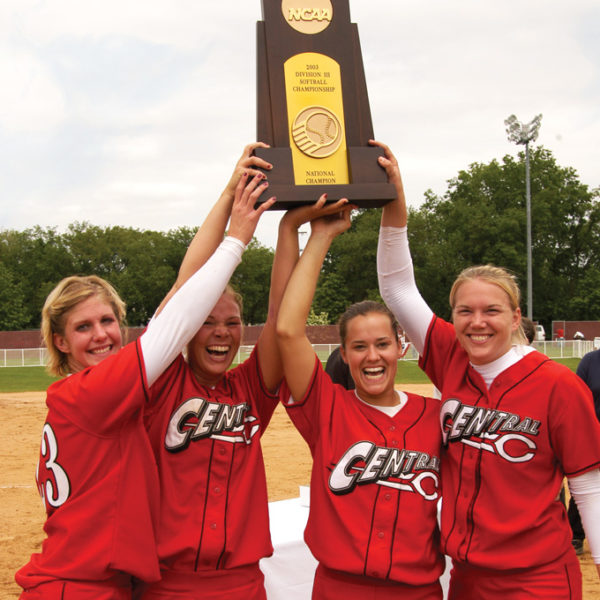 Weller’s NCAA involvement gave him a platform to promote women’s athletics. An NCAA Division III Steering Committee member and Division III philosophy author, Weller helped deftly steer legislation that was approved at the 1980 convention providing for women’s championships in Divisions II and III. He was appointed, along with Judy Sweet of University of California, San Diego, as Division III representatives to the Special Committee on NCAA Governance, Organization and Services, created to oversee incorporation of women’s programs within the NCAA.

AIAW leaders offered stiff resistance. They viewed the well-financed NCAA as a male-dominated organization. Weller and others instead saw the move as a way to expand opportunities for women.

Just six months later, Central captured another national crown, winning the 1982 women’s track and field title by an even more lopsided margin. Broek and her 4×100-meter relay teammates raced to the first of their two NCAA individual crowns. 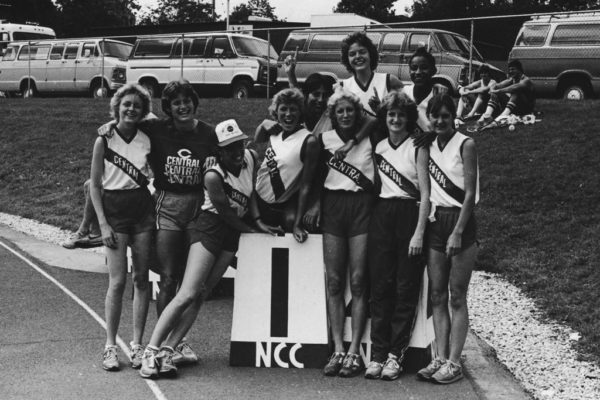 Another impactful Central voice was Dean of Students Marjorie Giles, who lacked an athletics background but developed a love for Central’s student-athletes. She had no idea how to attack a Cover 2 football defense, but Weller chose her to serve as a faculty athletics representative because of her sound judgment. Her involvement grew and she helped shepherd the incorporation of women’s athletics into the Iowa Conference in 1982. She served as the league’s first female president in 1991-92 after rising to receive appointment as Division III representative to the NCAA Council from 1990-94.

Schipper’s support is sometimes overlooked. Influential nationally as a member of the powerful NCAA Football Television Committee and later as president of the American Football Coaches Association, he was an enthusiastic women’s sports advocate at a time when many football coaches were resistant. “Schipper’s vision was we needed a women’s program, they deserve it, they ought to have it, and I’m going to do what I can to see that it happens,” Boeyink told Lori Witt, associate professor of history, in her insightful published essay on the origins of the Division III philosophy.

Schipper was a visible presence — and a booming voice — at countless Central women’s events.

“When I was pitching, the two people I could always hear in the stands were my dad and Coach Schipper,” says Emily Grimes Rottinghaus ’94, a two-time all-America softball pitcher. “He was supportive of all the athletics programs and truly cared for every Central College athlete and coach.”

“Coach Schipper was everywhere,” Broek says. “It was very clear that he was an athletics director for all sports.”

The Impact of Women’s Athletics

In her work at Macalester, Broek looked beyond trophies and titles as she grew to understand the impact athletics participation can have on women’s development.

“It helped with my confidence, my ability to form relationships with others and a sense of leadership that really instills the idea that you can take what you’ve learned in an athletics setting and move forward as a team,” she says. “I think these ideas of relationship building and teamwork and communication, which we all need in any kind of setting, are started in sports in college, at least they were for me.”

“I think of the confluence of things that allowed me to shine in athletics,” she says. “A president who really cared about athletics and about me as an individual. An athletics director who was kind of this grizzled football coach but really did care about us and wanted women’s teams to be successful. And Title IX passed so there was this movement on behalf of women in sports that I wasn’t even aware of at the time.

“I’m so grateful all of those things came together to really impact my life. I mean, those are some of my favorite Central memories.”

For an up-to-date schedule of all Central sports, visit athletics.central.edu/calendar.