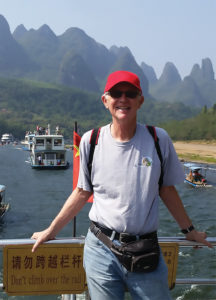 Since he was a young boy, Paul Poppen ’69 knew he was going to attend Central College.

“Attending Central has always been a family tradition,” Poppen says. “Both of my parents and my grandparents attended Central. I didn’t even really think about other schools, even when they offered me scholarships. Growing up in small towns throughout my childhood, Central felt bigger than what I was accustomed to but also felt like home.”

Poppen’s grandfather, John S. Ter Louw, Class of 1916, served on Central’s board of trustees and received a Doctor of Divinity degree from the college. In 1979, Poppen and his siblings established the John S. Ter Louw Scholarship in his honor, which is awarded to an upperclassman whose academic record reflects the high level of intellectual curiosity exhibited by Ter Louw.

Forty years later, Poppen is establishing a scholarship of his own at Central: The Poppen Diversity Scholarship. A generous gift of $500,000 will support the scholarship, which will be awarded to students of diverse backgrounds who are underrepresented in higher education.

Poppen’s gift also will support the Poppen Fund for Social Justice Programs, a new endowment that will fund areas of social justice, including legal, health, financial and environmental. The program will support research, scholarship, education and remedial activities at Central while encouraging student involvement in issues of social justice. This includes collaborative research with faculty and students in social justice; development of workshops for faculty; new courses; and visitors and guest lecturers.

“There have been a lot of conversations about diversity, equity and inclusion on Central’s campus, especially in the last few years,” Poppen says. “I want to help organize those important conversations. I want to help Central make an effort to recruit more ethnic and racial minority students. That may be an ambitious goal, but I think it would be beneficial for Central students to learn perspectives and experiences of people who are different than them.”

Originally a math major, Poppen changed his course of study to psychology after a life-changing trip abroad as a second-year student. Central invited him to be one of the first students to sail aboard a ship as part of the University of the Seven Seas, an early study abroad program for students with “an unbound curiosity and dedication” for learning. The ship sailed to 20 different countries over the course of a semester. What Poppen witnessed changed the course of his life.

“South America and Africa were a huge surprise,” Poppen says. “In the 1960s, media and television offered a sense of what life was like in other countries. But I was still shocked at what I saw. There were huge discrepancies in the lives of people and the beautiful architecture that often surrounded them. There were wonderful hospitals in Africa, but on the other hand, people were living in shacks and barely surviving. That was when I really started thinking about the conditions in which other people live and how it affects their health and well-being.”

Poppen deepened his studies in social psychology and interpersonal relations at Cornell University, where he received his Ph.D. in 1973. His work then led him to George Washington University in Washington, D.C., where he has taught psychology since 1979. He is the Thelma Hunt Professor of Psychology and served as chair of the department of psychology for 12 years.

His research in the past decade has focused on gender, culture and health, especially HIV/AIDS in Latinx and immigrant communities. He is on the executive committee of the George Washington University HIV/AIDS Institute and is a consulting editor to two journals: AIDS Education and Prevention and Cultural Diversity and Ethnic Minority Psychology.

With nearly 50 years of expertise in social psychology, Poppen wants to magnify the important conversations that are happening around social justice in the United States.

“Even though we aspire to have liberty and justice for all in this country, it’s not necessarily equal,” Poppen says. “Some people have advantages and others have disadvantages. Some of the facts we’ve known for a long time about social equity haven’t been brought into a framework where people can really think about and discuss them to try to figure out what we can do to make things better.

“And I want to encourage the Central community to listen, to learn and to do what they can. That’s why I’m giving back.”