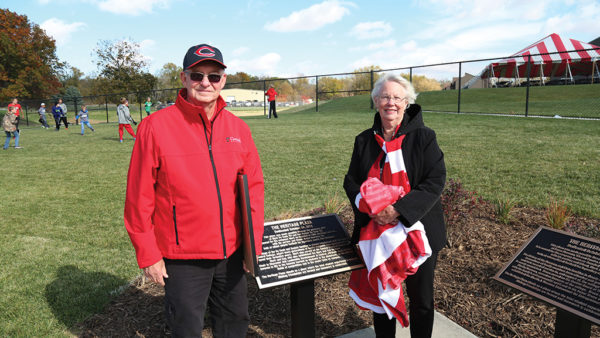 Born and raised on a farm in Mahaska County, Iowa, Mark earned his bachelor’s degree in economics at Central College. While at Central, he was captain and an All-Conference football player for the Dutch. He was awarded the Heerema-Schilder MVP Award in 1963 for his talent and dedication on the football field. Mark and his childhood sweetheart, Kay Kuyper De Cook ’63, right, were married while they were students at Central on Aug. 30, 1961.

After graduation, Mark worked for American Seating Co. in Cleveland, Ohio, from 1964-68. He returned to Pella to work for Pella Corporation as regional sales manager, where he later became eastern divisional sales manager. In 1983, he started his own business, Heritage Lace, with his lifelong friend and business partner, Bruce Heerema ’63. He served as its president and co-CEO until his retirement in 2006.

Mark served on Central’s Board of Trustees from 1991-2008 and was named Trustee Emeritus. In 1993, Mark and his wife Kay were awarded the Mr. and Mrs. Alumni Award at Central. The Mark and Kay De Cook Endowed Scholarship and the Mark and Kay De Cook Chair in Character and Leadership Development were funded by their generous support to Central.