Will Daniels ’19 wasn’t sure if coach Jim Fuller’s intent was motivation or comedy.

To Daniels, then a sophomore, it seemed more like fantasy. He had just finished third in the 2018 NCAA Division III men’s decathlon despite losing points after hitting a hurdle.

That’s when Fuller, a Central College associate track and field coach and highly regarded multi-events guru, saw the potential for Daniels to eventually qualify for the U.S. national meet — or even the Olympic Trials.

It was a seed Fuller kept trying to plant in the ensuing months.

“I kind of laughed at him a little bit,” Daniels says. “I thought he was just trying to be positive and encourage me as an athlete. I always just kind of took it as joking and brushed it aside.” 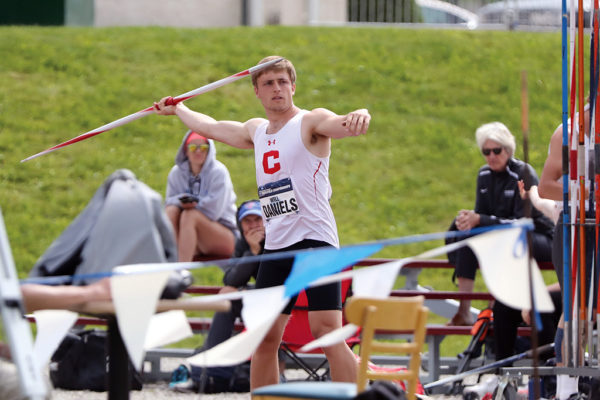 Will Daniels ’19 joined some of the world’s greatest decathlon athletes in the U.S. Olympic Trials in June. Daniels’ best effort was in the javelin, where he finished eighth. He finished 14th overall.

Not only did Daniels land an invitation to join some of the world’s greatest all-around athletes in the U.S. Olympic Trials June 19- 20, 2021, in Eugene, Oregon, but when he walked onto the storied Heyward Field track, another Central grad, Kurtis Brondyke ’11, was among the other 17 qualifiers joining him.

Brondyke, formerly an assistant coach working with decathletes at Central Missouri State University, was making his second Trials appearance, having finished 11th in 2016.

“That was really cool,” Daniels says. “I was really excited to see that he made it because he’s a guy I’ve met at meets, competing against his athletes from Central Missouri. I’ve never actually competed with or against him but only talked to him when he was coaching, so that was a lot of fun.”

Both posted two of the top-18 decathlon scores by an American athlete since Jan. 1, 2019, to reach the Trials, but neither had their best showings there. They each failed to score in one of the 10 events, an instant death knell for competitive scoring hopes.

Central Scenes at the Trials

Daniels’ best effort was in the javelin where he finished eighth, along with a ninth-place finish in the high jump. He received no points in the 400-meter dash after being disqualified for a lane violation. Brondyke was fifth in the pole vault but came up empty in the high jump. Daniels finished 14th overall with 6,803 points, well shy of his career-best 7,864. Brondyke was 15th with 6,575. Garrett Scantling put up a meet-best 8,647 points to earn one of the three U.S. team spots for the Olympics in Tokyo.

While the results failed to meet expectations, the experience vastly exceeded them.

“It was kind of surreal at first,” Daniels says. “Like when I was warming up for the 100, the first event. And just seeing all the other decathletes roll up to the track and to see all these people that I’ve only really seen on YouTube videos. Guys I have been studying the last couple of years, studying their techniques and, all of a sudden, seeing them checking in at the same place I checked in.”

It was equally surreal to Central fans, who flipped on NBC’s Trials national telecast and saw the two familiar Dutch names when the lane assignments flashed on the screen. 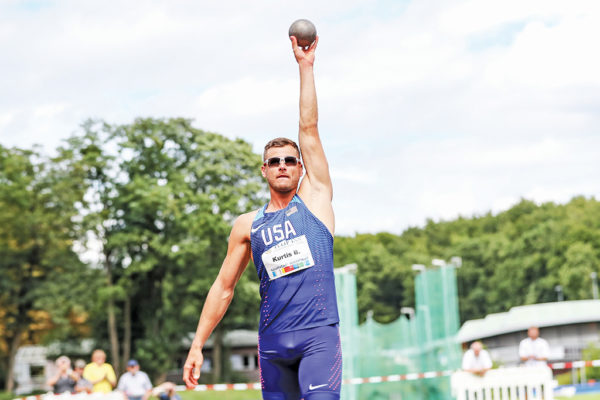 Kurtis Brondyke ’11, one of America’s top decathletes, is a four-time Team USA qualifier in the decathlon. This summer he vied for a spot at the 2020 Tokyo Olympics. He finished 15th overall.

Brondyke, a six-time all-America honoree at Central who captured the 2011 indoor pentathlon national crown, was likely making his farewell appearance as a track and field competitor on the national stage. After qualifying for Team USA four times, placing as high as fifth in 2017, and serving as U.S. captain in the 2017 Thorpe Cup as well as winning the Drake Relays decathlon, Brondyke said at age 32, his body is telling him it’s time to coach full-time.

As it has to so many others, the pandemic dealt Brondyke a harsh blow. Not only were last summer’s Olympic Trials postponed, but he tested positive for the COVID-19 virus last spring, derailing his preparations.

“Going into 2020 I felt really good about training,” he says. “I was still in the realm for pushing for a (personal-best) score and maybe finally crashing that (8,000-point) barrier. But this year, obviously dealing with everything, my goal was to pray that nobody passed (his qualifying score), and then I was able to make it to the meet just to have the experience to compete with my brothers one more time, the guys that I’ve competed with the last five to six years. You know, get to be able to see them one more time in that environment.”

Those decathlon brethren hold Brondyke in high regard, Daniels says.

“Pretty much everyone in the field knew him before the competition started, and you could tell everyone really liked him and kind of looked up to him,” he says.

That status was earned through years of competition.

“Being a small-school kid, initially I felt like I had to, not necessarily prove myself, but make myself respectable,” Brondyke says. “But I think the way I carry myself through the events, the respect I have for the event and the respect I have for everybody else, I almost felt like they see me as like a weird guru. I know people, and I study the events and the decathlon in the U.S., so I feel like the guys I have competed with for a long time have that kind of respect for me the same way I have respect for them.”

In July, Brondyke joined the coaching staff at Iowa State University, where he’s an assistant coach responsible for sprints, hurdles, jumps and multi-events. 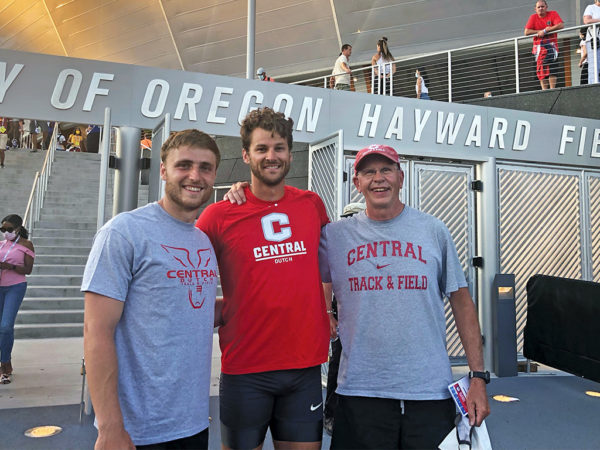 Jim Fuller, associate head men’s and women’s track coach (right), Kurtis Brondyke ’11 (center) and Will Daniels ’19 enjoyed the thrill of hearing the words “Central College” announced at events more than once during Olympic Trials this summer.

For a Division III school to produce two of the nation’s top decathletes is startling.

That the Division III school that did so is Central is not.

Central’s status as a multi-events incubator was launched in the 1990s with coach Kevin Sanger ’93 and associate head coach Guy Mosher, a decathlon savant who worked with Brondyke at Central Missouri State.

Mosher coached decathlete Kip Janvrin in the 2000 Olympics in Australia and served as the U.S. decathlon team coach for an international meet in 1997. He coached at Central for 21 years and was followed by Fuller, whose son Aaron Fuller ’14 was a decathlete coached by Mosher. Fuller was a head coach for 24 years at Division II Northern State University in South Dakota. Both Mosher and Fuller were cited as the USTFCCCA National Men’s Assistant Coach of the Year while at Central. Under their guidance, Central men’s and women’s multi-event athletes have received all-America status 47 times while claiming 11 national championships.

Fuller, who got an up-close view of the Trials after he and former Central all-American heptathlete Ryan Kruse ’18 jumped in a car and drove to Oregon, said those who put limits on Division III athletes are typically proven wrong.

“The decathlon doesn’t care whether you’re Division I, II or III or anything else,” he says. “What it cares about is how hard you work and if you work hard at whatever level, you can get there.”

But it was a thrill.

“I thought, wow, I’m sitting here in the best track facility in the country and I’m hearing the words ‘Central College’ more than once as they announced the events,” Fuller says. “How cool is that?”

While he only coached Daniels, Fuller is an enthusiastic fan of Brondyke as well.

“They are both incredibly loyal to Central College,” Fuller says. “Kurtis has been gone for 10 years, but he still follows our guys and cares about our guys. He is so positive about this place, even though he coaches someplace else.”

Daniels was one of the youngest competitors in the field and is on an academic fast track as well. He graduated from Central in just three years while still posting a lofty 3.99 grade point average. After sweeping the Division III indoor pentathlon and outdoor decathlon NCAA crowns in 2019, he received the CoSIDA Academic All-America of the Year Award, the American Rivers Conference Duane Schroeder Male Scholar-Athlete of the Year Award and an NCAA Postgraduate Scholarship. This past spring he competed for the University of Iowa while completing a master’s degree in clinical exercise physiology.

Daniels hopes to enroll in medical school in 2022 after spending a year working in a hospital in cardiac rehabilitation. The demands of medical school will likely spell an end to his decathlon career. With some peak-performance years potentially still ahead, he’s not sure he’s prepared to walk away.

“I’m definitely kind of sitting on that decision a little bit, seeing how my body feels,” he says. “I have to see how the work situation works out with my schedule, but I’m definitely considering continuing to train at Iowa. My coaches have said that was an open door. I could still train with the team. If that was the case, I could aim for the U.S. international meet and then the U.S. Outdoor Nationals for this upcoming year. I’m still kind of weighing my options there.”

That he even has options to compete with the nation’s elite is testimony to the vision Fuller first had a few years ago.

“Looking back, I guess Coach Fuller kind of had the last laugh,” Daniels says.

For an up-to-date schedule of all Central sports, visit athletics.central.edu/calendar.