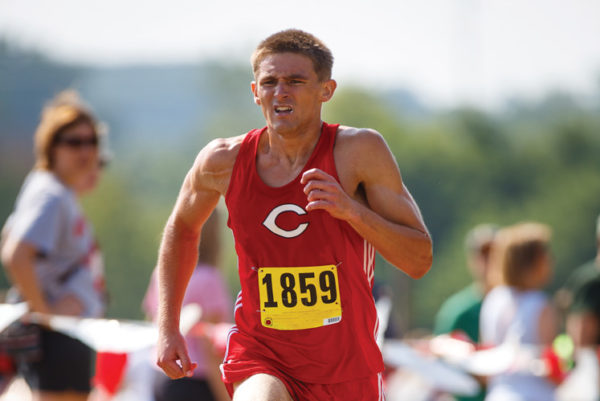 Austin O’Brien ’14 was the Iowa Conference men’s cross country MVP in 2013, placing 11th at the NCAA Division III Championships. He then won an indoor track and field national title in the distance medley relay.

The Olympic dreams of Austin O’Brien ’14 are as improbable as where they were spawned — on a couch in front of a television.

In 2016, his all-America cross country and track and field performances at Central College were behind him. But seeing Olympic distance runners dance across his television screen lit a spark.

“That’s kind of when the first thought of, ‘What does it take to qualify for the Olympic Trials in something?’ came up,” he says. “Truthfully, I was geared more toward track. I thought, ‘Oh, man, it would be great to get in the 5,000 meters or 10,000 meters for the 2020 Olympic Trials.’”

Then the hard numbers slapped him with a bracing jolt.

“They released the standards of what it takes to qualify,” he says. “And even as much as I had improved, the 5K and 10K times just seemed outrageous. And then I looked at the marathon time. From a pure fitness standpoint, it seemed like the marathon time was easier.” 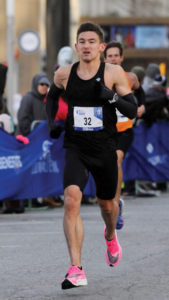 Obsessed with basketball as a youth,
Austin O’Brien ’14 didn’t run his first
marathon until 2019 before reaching the
U.S. Olympic Trials in the event in 2020.

There was one small complication with the 26.2-mile marathon, however. O’Brien had never run one.

Yet there he stood less than four years later, his tightly laced green and black Nike Air Zoom Alphafly Nexts resting on the Atlanta pavement at the start of the U.S. Olympic Marathon Trials in February 2020.

He was among 112 contenders for three U.S. team spots. While there was no fairy tale ending in Atlanta that day, O’Brien has never let reality get in the way of a good dream, the latest of which is labeled 2024.

“I always have thoughts, I call them dreams, and for me these are things that aren’t tangible, aren’t realistic,” he says. “They don’t have to be, right? I’m dreaming. And for 2024, that dream is to be an Olympic contender. I want to show up to the line of the Trials for the marathon and be a true contender for making the team. Whether that’s realistic or not doesn’t matter right now. That’s my dream.”

It doesn’t bother him that it appears there’s little chance he’s right.

“Obviously, right now it’s not realistic,” O’Brien says. “But now I get to have fun because now I have three years of, ‘How do I get to that level? What do I have to do to make that happen?’ I’m going to be sticking with my coach and following that plan.”

His early running career was more a product of accident than imagination. While still harboring adolescent visions of a lengthy NBA career, O’Brien went out for junior high cross country in Bettendorf, Iowa, to train for basketball. The results were startling.

“I actually ended up winning state (for seventh graders), setting the state record,” O’Brien says. “Over time I kind of discovered I was better at running than basketball.”

O’Brien was at the forefront of a groundbreaking era in Central cross country, helping take the program from seventh in the Iowa Conference in 2010 to its first league titles in 2012 and 2013. The Dutch were 12th at the 2012 NCAA Division III Championships, during which O’Brien was 146th in 26 minutes over 8,000 meters. It was viewed as a successful showing, except by O’Brien.

“Truthfully, I was just so mad at that,” he says. “I was the first guy in the race to not break 26 minutes. And that just ate at me, just drove me insane. I made a goal, and at the time it was super unrealistic. I wanted to be an all-American my senior year, and that’s top 35.”

It turns out the genesis for a faster 8,000-meter run was a 4,000-mile flight. He spent the spring semester at Central’s study abroad program in Bangor, Wales.

“I took that as an opportunity to just run a bunch of miles,” he says. “I think mentally I needed a break from competing all the time. I went over there and was probably running 60-90 miles a week, some harder workouts, but a lot of just long, easy running.”

The Snowdonia mountain range was a training upgrade over a bike trail to Lake Red Rock. “It’s just a really beautiful place to run,” he says. “I remember I had one long run, probably 15 or 16 miles, and it went past three different castles.”

A revitalized O’Brien took league MVP honors in 2013 and soared beyond his all-America goal with an 11th-place Division III finish in 25:02 — nearly a minute faster than 2012 — helping Central take a best-ever sixth place.

An NCAA Division III indoor championship performance in the distance medley relay followed, with an eighth-place finish in the mile.

“He always saw our potential,” O’Brien says. “When I talk about our culture of never being content and always wanting to get better, I think that started with him. He brought that mindset.”

Then the Olympics Happened 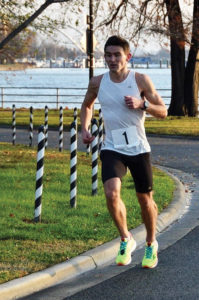 “I wasn’t clinically depressed or anything, but I was just down, and I was not fun to be around,” he says.

“I went and talked to a counselor, and it was so funny. It was just this giant light bulb moment. She said, ‘Well, it seems like running is what you’re missing.’ And I thought, ‘You’re absolutely right. Why haven’t I thought of this?’”

And he began to run again. Slowly, at first. Not far. But running.

“That’s when the Olympics happened,” O’Brien says. “Just seeing that is enough to get people motivated and excited about sports.”

He tried a half marathon, then hired a coach, Tom Schwartz, of Boulder, Colorado, who was recommended by a friend. Still unprepared, in January 2019 he finished a marathon in Houston in two hours and 31 minutes.

“It was a rough, rough first experience of a marathon,” O’Brien says.

He needed to get to 2:19 or faster to get into the Trials. In June he finished in 2:22 at Grandma’s Marathon in Duluth, Minnesota.

“I’m only four minutes away, but that’s still a good 10 to 15 seconds a mile that I need to drop,” O’Brien says. “The lay person might see four minutes and think that’s so close. As a runner, you know that’s a big difference.”

He discovered he had an iron deficiency just six weeks before a final attempt in November in Indianapolis, Indiana, but an iron supplement and radical diet changes sparked a successful Hail Mary surge in his training.

After 20 miles at Indianapolis, O’Brien was 30 seconds in front of the needed pace.

“What’s funny was I was still feeling pretty good at mile 20,” he says, a sensation hard to fathom for most clear-thinking humans. A mile straight into the wind caused a bit of a stopwatch tumble, but when O’Brien reached the final half mile, the internal celebration began.

“That was fun coming into the finish line, seeing 2:18 on the board and knowing I had done it,” he says.

Officially, two hours, 18 minutes and 43 seconds earned him a trip to the Olympic Trials in Atlanta.

The Atlanta experience was memorable, the race was not.

“That was extremely underwhelming,” O’Brien says. “I don’t know exactly what it was, but there was something I ate that morning that didn’t agree with me and I had a really rough day.”

“I hung in through mile 16 or 17 but then finally it just hit me. This is going to be a brutal last nine miles. And I thought, well, if I stop now, I won’t have beaten up my body too bad so I can recover quickly and then start training for the next race.”

He stopped. But as it did for the rest of the planet, COVID-19 foiled the master plan.

“I dropped out thinking that I’m doing myself a favor so I can get ready for other races quicker, and then they all get canceled,” he says. “I entered this pandemic on a DNF (did not finish) race, which was probably the best thing to happen to me, honestly.” 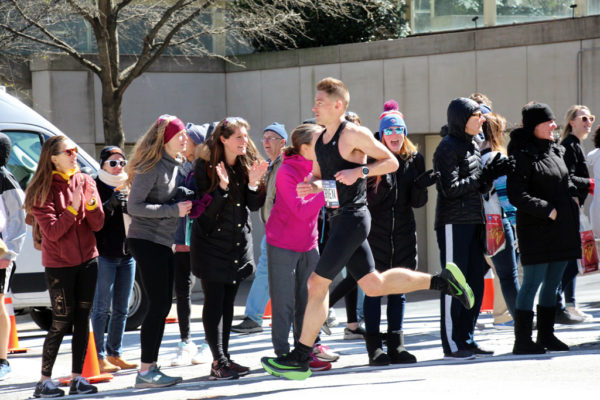 Austin O’Brien ’14 of West Des Moines is eyeing a spot in the 2024 U.S. Olympic Trials in the marathon.

Failure doesn’t frustrate O’Brien. He feeds off it. Just like his disappointing NCAA race in his junior season at Central led to an elite senior year performance.

“I’ve never confronted frustration with giving up and shutting down,” he says. “I’ve confronted it with, ‘What do I need to do to get better to redeem myself?’

“For me the failures — or disappointments is what I call them — fuel my training,” he says. “I wake up every day and I think about that DNF at the Trials. It excites me and gets me just angry enough to get out there to do the work and get better. But on race day, I don’t think about any of that. It’s all about the present moment and what I have to do now to be successful.

“It’s something you train your brain to do. It’s an attention thing and one way I do that is through daily meditation, just focusing on the breath for a prolonged period, whether it’s 10, 20 or 30 minutes.”

Distractions are the enemy of performance. “Part of it is processing whether I can hold this pace for the next however long. But then it’s just focusing on that next step, every time, one step forward.”

And another step forward toward his Olympic dream. Sure, it’s a fantasy. But he doesn’t need to be an Olympic team contender until 2024.

Today he just needs to be better than yesterday.

Early indicators are promising. He blew past his personal-best time by 57 seconds in winning the Blazing 8K in a record 23:28 in Davenport, Iowa, on March 21, then his 29:19 effort shattered his club team’s mark in the Blazing 10K in Des Moines, Iowa, on April 11.