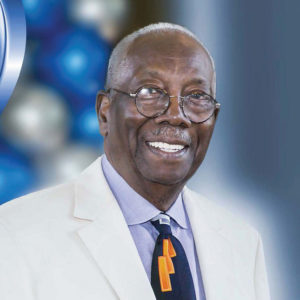 Manford “Manny” Byrd ’49, a lifelong educator and distinguished alumnus from Central College, died Jan. 17, 2021, in Chicago, Illinois. He was 93.

Byrd began his career teaching in Quincy, Illinois, from 1949-54. From 1954-67, he worked as a teacher, assistant principal, elementary and high school principal and assistant to the general superintendent of Chicago Public Schools. In 1968, Byrd was appointed deputy superintendent and chief operating officer of Chicago Public Schools. The appointment made him one of the highest-ranking African American public sector leaders in the nation. He then served as general superintendent from 1985 until his retirement in 1990.

Byrd served on the Board of Trustees at Central from 1986-97 and the National Advisory Council from 1997-2001. He was a member of more than 70 professional boards, including the Chicago State University Foundation, Joint Negro Appeal, Mid-America Chapter of the American Red Cross, Chicago NAACP and Board of Trustees of the Adler Planetarium in Chicago.

Byrd also was the recipient of more than 150 awards and commendations for excellence in teaching and academic administration, including an Honorary Doctor of Humanities Degree (1969) and Distinguished Alumni Award (1964) from Central.

He is survived by his wife of 64 years, Cheribelle; sons Carl, Bradley and Donald; eight grandchildren; and one great-grandchild.