“I Love This College” 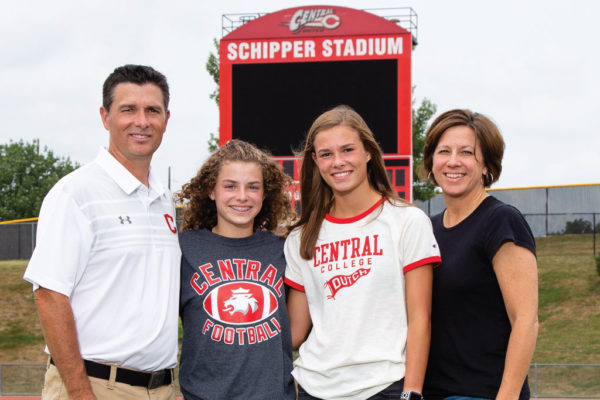 Jeff McMartin ’90 (left), along with his daughters, Emily and Caroline ’24, and wife Laurie Rieken McMartin ’90.

Even as he was coaching elsewhere, Central College wasn’t far from the mind of Jeff McMartin ’90.

It remained a special place to him and his wife, Laurie Rieken McMartin ’90, as the couple bounced from place to place along their career path.

It meant stops in North Carolina, Illinois, New York, Wisconsin and Indiana. As they settled into their lives away from Pella and Central, they still felt the need to give back to the place that had given them so much.

“As alums, we both benefitted from this place. It guided us toward careers we are passionate about, and it’s connected us to people who really helped us along the way,” Jeff McMartin says. “Central has given us a lot, and we feel it’s important to give back and be good stewards toward the college.”

The couple first gave to Central prior to returning to Pella and the college. McMartin was named the Dutch’s head football coach in January 2004.

The McMartins are members of the Central Club, which has supported Central’s student-athletes since 1959, and the Cornerstone Society, which honors the tradition of private support through the recognition of cumulative giving.

Laurie works as a design assistant for Jane Smith Design in Pella. She was a three-time varsity letter-winner in track and field. The couple supports both athletics and academics, having given both toward student scholarships and athletics initiatives. Not surprisingly, the McMartins supported the Forever Dutch® initiative, an $18 million project to renovate and expand Central’s athletics facilities.

Fundraising wrapped up in November 2020, and the construction was completed in 2021.

“The Forever Dutch program was very important, and we were excited to be part of that,” McMartin says. “As coaches, we really appreciate the people who made an impact and supported this initiative.”

He returned to Pella and has coached at Central since 2004, compiling a 128-42 record in 17 seasons. Under his leadership, the Dutch have won five conference titles and reached the NCAA Division III postseason five times.

Central won its 31st league title and made its 21st playoff appearance in 2019. McMartin certainly has done his part to uphold the tradition of a program that hasn’t had a losing season since 1960. 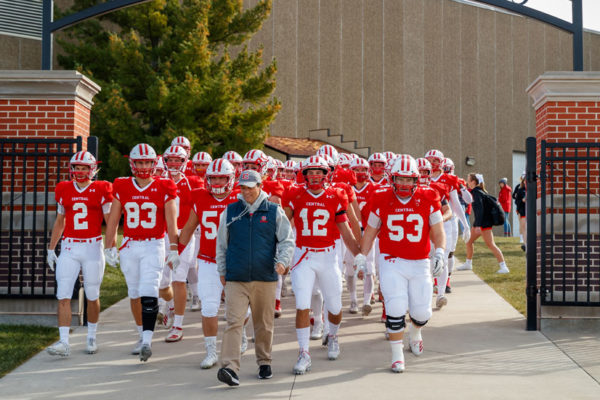 McMartin leads the Dutch football team to the field on gameday.

“I’ve enjoyed the challenge. I love this college. I love the team,” McMartin says. “I very much respect and care for the legacy of this program and the guys who played before. I want them to feel proud of the team, the school and the program.” McMartin was part of the football tradition at Central, having played for Ron Schipper, the legendary coach and member of the College Football Hall of Fame. Schipper coached the Dutch from 1961- 96, compiling a 287-67-3 record. His teams won 18 Iowa Conference championships and the 1974 NCAA Division III national championship.

As a student, McMartin broke his arm in the final two years of his career. Schipper allowed him to become a student assistant coach, helping with scouting and recruiting. Through that, McMartin’s desire to coach was born.

McMartin credits Schipper and the coaching staff for connecting him to the right people as he moved up the coaching ranks. He’s more than thrilled it led back to Central, a place that truly supports students and athletics.

“You have to be supported throughout. It’s an institutional commitment,” McMartin says. “Central has committed to being successful and has done a lot of great things along the way to put itself in the best possible position to help our students — athletically, academically and as people.”

McMartin strives to do the same for every player he coaches and sees it in so many areas across campus. He also now has another perspective — his daughter, Caroline McMartin ’24, just wrapped up her first year as a student at Central.

Caroline is a biology/pre-dental major but has thrown herself into the Central community, serving as a tour guide with the admissions office and competing in track and field and cross country.

“Because of my career, both of our girls (Emily is still in high school) have gone to Central activities and been on campus since they were little. This place is very familiar to them,” McMartin says. “With Caroline, as she was able to visit other colleges and compare, she got to a point where she felt this was the best fit and offered her the best opportunities.

“She’s connected with some really good people and has been challenged but also supported. It’s been nice to watch Caroline grow academically, athletically and as a person here.”

The past, present and future have all come together at Central for the McMartin family. Perhaps it’s something Jeff and Laurie envisioned all those years ago when they made their first donation to their alma mater, long before coming back.

“We love this place,” McMartin says. “It’s had such a special impact on our lives.”