Jakob Steenhoek ’15 promises no geese were harmed in the making of his career.

But the Canada geese on the island near the pond on Central College’s campus certainly took an interest in what was buzzing near them one spring day in 2014.

It was the first time Steenhoek, along with friend and class partner Nick Rozendaal ’15, took their built-from-scratch drone out for a test run.

“We were flying it real low and slow, trying to get some cool footage of the bridge over the pond,” Steenhoek remembers. “It was maybe 10 feet over the water and all of a sudden these two geese took off flapping and honking. I let go of the controls for a bit and the drone was just hovering. Finally, one of the geese went in to attack it and there was just a poof of feathers.”

The drone flipped over and crashed into the pond. The goose followed. There were flashes in the water. Controls were short circuiting and smoke was bubbling up.

“We were just devastated,” Steenhoek says. “Not only did we think the drone was destroyed, but we didn’t know what was going to happen with the goose.”

Luckily, both were OK.

“It was 100% not on purpose,” says Steenhoek, who rarely has shared the goose story. Canada geese are protected under the Migratory Bird Treaty Act of 1918, a reminder sent out yearly across campus.

“We just felt terrible, but the goose climbed back up on the bricks. The next time we saw them, they were both there and both fine.”

The drone ended up fine, too. After fishing it out of the pond, Steenhoek and Rozendaal took it apart and put the parts in rice to dry them out. After a few days and a few replacement parts Steenhoek estimates cost only a few hundred dollars, they put it back together.

Steenhoek was able to fly the drone again and headed toward his future career. 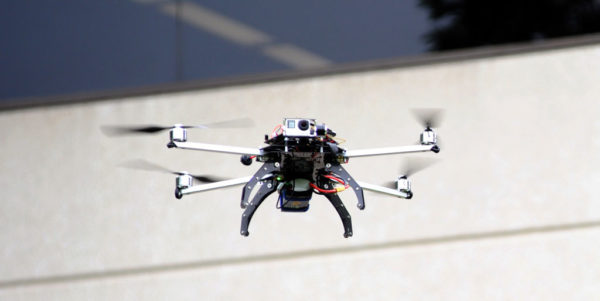 The first drone voyage Jakob Steenhoek ’15 led was on Central’s campus for a project required for the Martin Heerema ’34 Entrepreneurship Program.

Seven years later, it remains the only incident Steenhoek has had flying a drone.

Now a much more experienced drone pilot, Steenhoek works as a drone UAV (unmanned aerial vehicle) specialist for Shive-Hattery, an architecture and engineering firm with headquarters in Cedar Rapids, Iowa. He works out of an office in West Des Moines.

His job is flying drones over potential and planned construction sites to collect photos, measurements and other important data used by Shive-Hattery in planning its projects. It’s called photogrammetry — “the process of making surveys and maps through the use of photographs, especially aerial photographs.”

Steenhoek’s work helps bring to life 3D models so stakeholders have a better vision before, during and after construction. According to the Shive-Hattery website, these “help tell the story of a project through artistic photo-realistic renderings, video flythroughs and immersive virtual spaces.”

Steenhoek started as a full-time employee with Shive-Hattery in February 2018, when the firm essentially bought his drone business.

He had been working on his own, doing the same kind of work on a contract basis for many different companies. Knowing he needed to become a licensed surveyor, Steenhoek reached out to Shive-Hattery about working part time with its surveyor to collect the appropriate hours.

Quick to recognize the quality of his work and the importance of it to its clients, the company instead wanted him to come on full time.

“We had some meetings and came to an agreement and they bought out my business,” Steenhoek says. “They bought all my equipment and made me a full-time employee.” 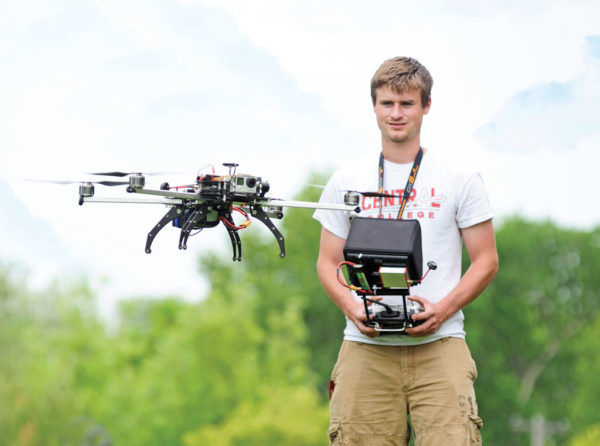 Jakob Steenhoek ’15 works as a drone UAV (unmanned aerial vehicle) specialist, making surveys and maps through the use of his photographs and video.

That failed first drone voyage was for a class project required for the Martin Heerema ’34 Entrepreneurship Program at Central. In it, students are paired together to start an actual business from the ground up.

It was Fall 2013 and drones were just starting to become a bigger deal. A friend studying agriculture had told Steenhoek about drones’ usage in agronomy, the science of soil management and crop production.

Steenhoek’s father is a farmer, so he recognized a potential business opportunity with drones and farming.

“But we were also seeing people flying drones and taking cool video of wildlife, like in the mountains in Colorado or somewhere like that,” Steenhoek says. “We decided that’s what we wanted to do for our business. So it started off that way.”

In a class. At Central. After stumbling on a flier for the entrepreneurial program.

“It’s crazy to think about now,” Steenhoek says. “If it wasn’t for that, who knows what I would have done at Central? It’s crazy, the path that got me here.”

Perhaps it was simply by chance, but Steenhoek also credits Central and its liberal arts education leading him there. He came to college one of those students unsure about what he wanted to do with his life.

“My problem was that I liked everything,” he says. “I ended up minoring in a whole bunch of different fields — math, global sustainability and entrepreneurship. It all started to come together and incorporated all these classes I was taking at Central. Things started to fall into place.”

Part of the class project involved a “customer discovery process” during which Steenhoek and Rozendaal had to meet with potential customers, present the product and ask if it was something they’d pay for in the real world.

Steenhoek’s girlfriend at the time — Alicia Huegel Steenhoek ’15, now his wife — had an uncle working at Shive-Hattery. During a holiday gathering, they were introduced. He suggested to Steenhoek taking what they had done, calling Shive-Hattery and showing it to the higher-ups in civil engineering and architecture.

“They were all about it and super excited,” Steenhoek says.

Shortly after and while still at Central, Steenhoek helped on a project near Maquoketa Caves in Eastern Iowa. It was the first of many combined projects, the start of a relationship going strong today. 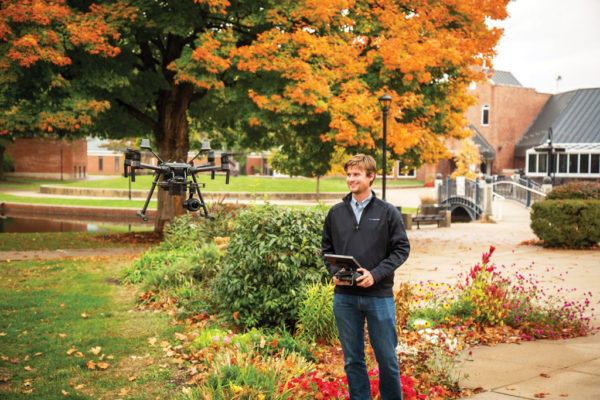 Jakob Steenhoek ’15 draws upon the lessons he learned at Central to solve problems and create a life. “I’m super thankful and so grateful for my experience. It had a huge impact on me.”

Steenhoek has learned valuable lessons along the way, one of the first coming from his father, Daniel.

Needing money to get the business off the ground, Steenhoek approached his father about borrowing enough to purchase a drone. His father agreed to the loan, the only stipulation his son and Rozendaal build the drone rather than purchase it.

“We spent probably a month or two watching YouTube videos and trying to wire everything up and put this drone together,” Steenhoek says. “We’d get it together and it wouldn’t work, it wouldn’t fly and we’d have to take it back apart and put it together again. It taught me a lot about how drones work.”

That certainly came in handy after the drone crashed into the pond.

“I just remember us staring at the water for like five minutes, our jaws to the floor,” Steenhoek says. “We were freaking out about how we were going to explain this to my dad, too. Our first day flying it, and we wreck it?’”

It was then Steenhoek was able to draw upon things he learned at Central. Professors had challenged him every step of the way, encouraging him to face adversity head on, solve problems and take things on himself.

“That turned out to be a good experience, just knowing tough things are going to happen,” he says. “You have to keep going, keep trying and things eventually will work out.”

Even now, Steenhoek uses things he learned at Central, like communications skills or the ability to juggle work in different areas. It’s the benefit of a liberal arts education.

Steenhoek also thinks about and uses the relationships and connections formed at Central. A math minor, he recently reached out to Mark Mills, professor of mathematics, for help with a difficult math/engineering problem.

“I wasn’t even a student at the time, and he took a lot of time to help me work through it,” Steenhoek says. “Where else do you get that and have that kind of relationship that you can call on them even after you graduate?”

Steenhoek was a local kid from Pella who took a chance on Central. In return, Central opened doors and presented opportunities of which he took full advantage.

One of his first drone jobs was with Central. He met his wife at Central. And through one simple class for a minor, Steenhoek found his passion and his future.

“Central has been huge,” he says. “I’m super thankful and so grateful for my experience. It had a huge impact on me.”

Let’s Get Down To Business

The business management major has traditionally been a stepping stone to future success for Central College students.

“Having an educational background in business is helpful no matter what a person chooses to do in life,” says Jaclyn Rundle, associate professor of business management. “For instance, I teach management. It doesn’t matter whether someone is managing a business, a government agency, a nonprofit organization or a household. Management principles are needed in all of those areas. Business is a very practical and useful discipline.”

In addition, the EAM department partners with other academic departments on campus to offer different opportunities for students. For example, the department collaborates with mathematics and computer science faculty to offer majors in information systems and actuarial science. Or students can be certified at Central to teach secondary-level business classes.

The array of choices offered within the EAM department’s majors gives students the chance to discover exactly what suits them. Students who complete a business major are prepared to enter their chosen career fields right after college but also have developed skills that will enable them to transition to new areas of endeavor later in their careers.

The program was established by the late Bruce Heerema ’63, Central trustee emeritus, and Sandy Klein Heerema ’62, in honor of Bruce’s father. Mart Heerema served as treasurer of Central from 1963-70.