If there are personal highlight videos that stream in the memory banks of Central College’s basketball, volleyball and softball players from the past 30 years, they are narrated by Thom Summitt ’74.

In February, Summitt quietly ended his run as public address announcer that launched in 1990. His voice was a constant background presence for athletes during games, along with his ready laugh, encouraging fist bumps and 1970s music. He was at the mic for NCAA Division III championship finals in all three sports and other milestone moments in Dutch athletics history. He radiated the same enthusiasm when announcing half-court shootouts, co-ed dance performances and Parents’ Night introductions. 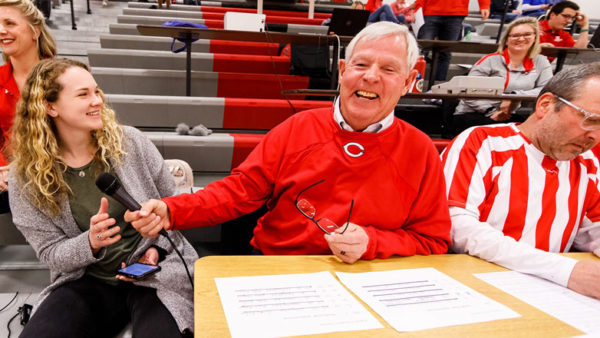 Thom Summitt ’74 jokes with former Central volleyball player Erin Dilger ’20 prior to a Dutch men’s basketball game. Summitt, a longtime favorite of Central student-athletes, retired as the men’s and women’s basketball announcer in February after 30 years. He previously announced at home volleyball and softball contests as well.

“He brought some energy to the gym,” Andy Waugh ’13 says. “Anyone who’s been around Central basketball recognizes Thom Summit’s voice.”

Never a varsity athlete, as a student Summitt was nonetheless immersed in the Central athletics world while in the equipment room. Friendships established there now extend to countless Dutch athletes and coaches he’s met since graduating. He also credits athletics leaders from his undergraduate years with providing a firm guiding hand.

“If it weren’t for (equipment manager) Eldon Schulte ’58 and (former football coach and athletics director) Ron Schipper, I never would have graduated,” Summitt says. “I enjoyed being away from home and they kept me on my toes.”

He filled in as announcer for the Dutch once in 1990.

“I think I did it because nobody else was doing it and then Coach Schipper asked me if I wanted to do it the rest of the season and I said, ‘Yeah,’” Summitt says. There was no training program for what became a 30-year side gig.

At the microphone, Summitt was respectful and quick to congratulate opposing players. Yet with every “And one!” and “Point, Dutch!” the energy in his voice betrayed his Central fervor. Few are more Forever Dutch®.

“You get to know the kids and it’s tough not being biased,” he confesses, acknowledging an occasional wince at an official’s call.

While most announcers play to the crowd, it has always been the athletes who are top of mind to Summitt. “The game is for the players,” he says. “There’s the entertainment part of it, but I tried to make every player feel they were just as important as the next player, whether it was a reserve who was in there when we were 20 points ahead or a starter. If they did something well, I tried to use enthusiasm. Everybody likes to have their name mentioned and I always tried hard to make sure I pronounced it right.”

That feeling was evident to Craig Douma, men’s basketball coach.

“On Senior Night he came up to me and says, ‘Coach, make sure you’re taking the seniors out of the game one at a time,’” Douma says with a smile. “He wanted to make sure they’re recognized. He cares about those players. That’s why he loves the program so much. It’s because he loves the kids and he loves people.”

Talk to the athletes and it’s clear Summitt is as special to them as they are to him.

“You always got a lot of high-fives before the game,” says Justin Madsen ’10, former men’s basketball guard. “He’s a pretty outgoing guy and he likes to know everyone. He was always around, which I think is great and is a positive influence on the team.”

On the softball field Summitt perhaps flaunted NCAA compensation rules with his tradition of handing out lucky pennies to Central players before games.

“He got to know them as people beyond the player,” says George Wares ’76, Central’s longtime softball coach. “I think that meant a lot to the players.”

Rachael Everingham Vice ’12 earned all-America honors as a softball designated player. An Illinois native now serving as a physical therapist in Paris, Illinois, Vice made an early connection with Summitt. As a freshman she helped play the team’s warmup music over the PA system.

“He was a friend but also in a sense, he and his wife were somewhat of a family,” Vice says. “When my family wasn’t able to be at games, he would always come up between games and tell us, ‘Good job.’ He made sure we always had somebody there, whether it was me or other players.”

The interaction with players and officials is what Summitt will miss most. Yet the ties to Central will remain.

“Central, it’s so many people you meet,” he says. “And whether you’re friends with them or not, when I traveled through an airport, I’d see somebody who went to Central and you had that connection. It’s just the friendships and relationships you develop and they’re there forever.”