In Our Own Words 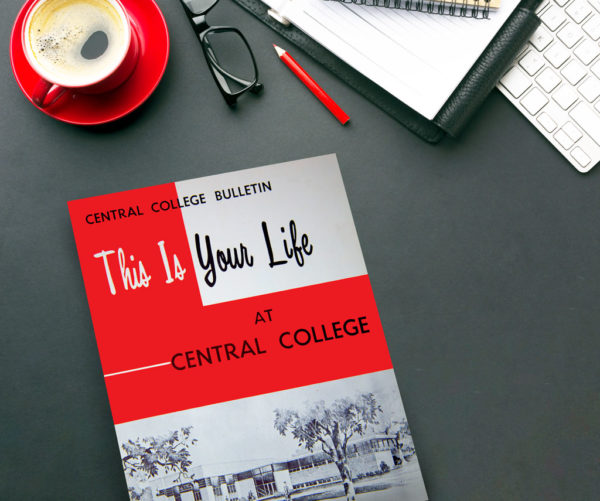 This 1957 issue of the “Central College Bulletin” served as that year’s admission brochure. Inside, photo spreads featured all aspects of college life from academics to athletics.

These days, Central produces a new suite of admission brochures and digital communications regularly to describe the college, its offerings and Pella to prospective students. But how does this work differ from the way Central presented itself in the past?

We raided the college archives to find out. We found amusingly archaic language. We found charming illustrations. We found nostalgic photographs. We found time-bound references from bygone eras. They all make for fun reading and viewing.

But we also found a remarkably consistent message. As far back as the record stretches, Central has publicized itself as a college that:

It’s a recipe for success that has served Central and its students well for more than a century and a half. 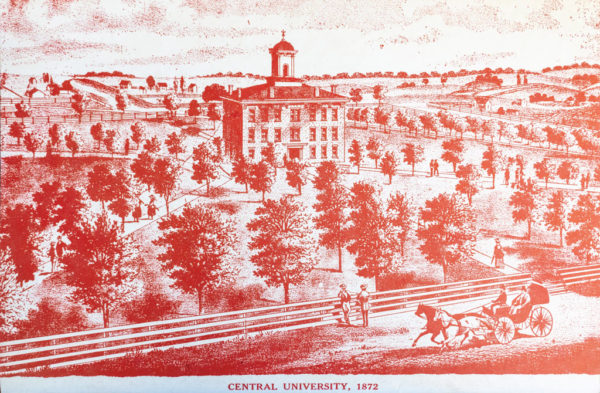 “Do you wish to become a Business Man? A Teacher? A Minister? A Lawyer? A Physician? An intelligent man or woman in any sphere of life?” asks a trifold, pocketsized brochure printed in 1890.

“Then go to CENTRAL UNIVERSITY, Pella, Iowa,” it continues. “Because a good education is the best paying investment. Because the courses of study and methods of teaching are PRACTICAL and THOROUGH; because the teachers are well educated, wide awake, and friendly; because the students are helpful and enthusiastic; because the expenses are very low and the place pleasant.”

More than just pleasant, “Pella is a beautiful little city of 3,000 people, without drinking or billiard saloons and free from those influences that attract the attention and corrupt the morals of students.”

Central “combines practical knowledge with mental discipline. It has no special departments on which it bestows its favors, but all are equally well maintained. Its students are encouraged in their social life to mingle freely with the teachers,” states an 1891 brochure.

This surprisingly modern-looking, pocket-sized brochure from 1928 includes profiles of notable Central alumni in several professional fields — as do Central’s admission materials today. “Central College is still doing business at the old stand,” the brochure states. “But the aim remains essentially the same, to help young people to make a life, not merely to make a living.” 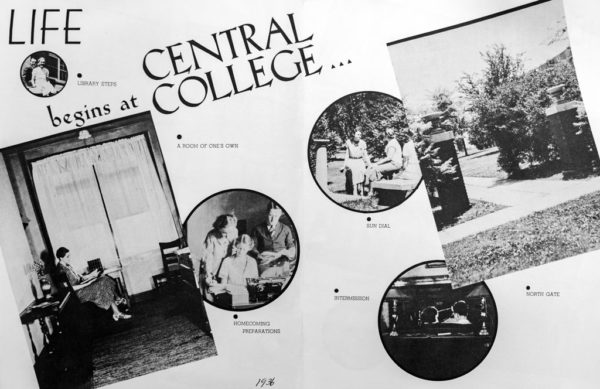 This 1936 viewbook is the earliest large-format admission brochure we found in the archives. For the first time, photography dominates. This spread features campus life. 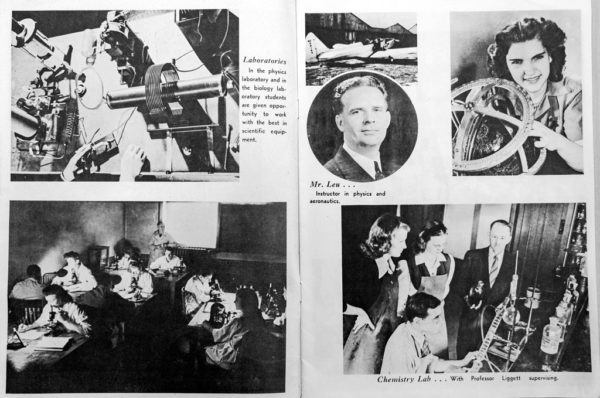 In 1945, a half-century or more before the term “STEM” (science, technology, engineering and mathematics) was coined, Central’s admission brochure emphasized offerings in those disciplines — and the attendant laboratories and pieces of apparatus. 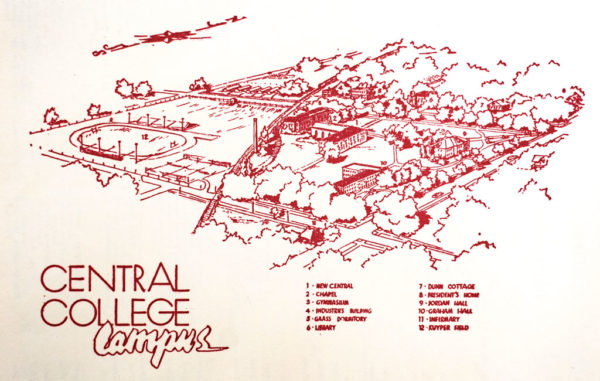 Central has always been proud of its beautiful campus, even in early years when the college had but a single building surrounded by “eight acres of well-shaded lawn.” By the time this map was produced, the college boasted a dozen structures, including the Kuyper Field — and enough foot traffic that students in 1953 were admonished to “use the sidewalk instead of cutting campus” to preserve the grass. Train tracks separated academic buildings from playing fields. Central Red replaced the earlier blue ink and has been used extensively in college publications since. 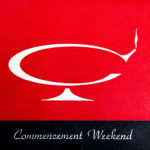 A midcentury modern style “lamp of learning” logo arrived by 1963. In a nod to social changes then afoot, the 1963-64 catalog stated Central aimed to develop in students “a creative intelligence which will enable them to deal positively and constructively with the problems of a rapidly changing society.” 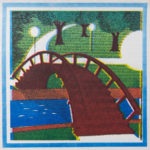 The campus’ iconic bridge (with 1970s “lollipop lights” in the background) became the new Central logo in 1978. “The campus bridge is uniquely ours, a focal point of the campus, meaningful to those who pass over it every day,” stated the “Central College Bulletin” in announcing the logo’s adoption. The bridge remains a prominent graphic in Central’s communications today. 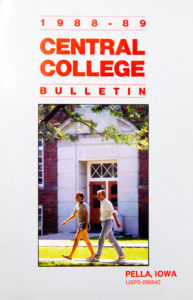 “Where are they now? asked the cover of this “Central Bulletin” edition published in 1989. The college is proud that nearly 100% of its graduates are employed in a field of interest, in graduate or professional school or completing service work such as the Peace Corps or Vista following graduation. It continues to publish the accomplishments of its most recent graduating class annually in “Civitas.” 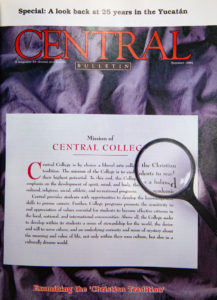 The college put its mission on the cover of this 1994 “Central Bulletin,” an alumni publication which also served as the college’s course catalog and, until 1978, occasionally as an admission viewbook. The cover story discussed what it meant to be a liberal arts college in the Christian tradition — a dual identity the institution has maintained since its founding. In 1994, that tradition was expressed, in part, as “a sense of stewardship for the world, the desire and will to serve others, and an underlying curiosity and sense of mystery about the meaning and value of life not only in their own culture but in a culturally diverse world.” 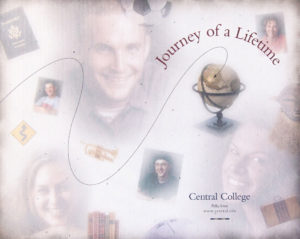 A journey theme and scrapbook-like design characterized this 2001 admission brochure. Journey is a word with much resonance at Central, naming college’s hallmark scholarship program and connoting the educational experience and the college’s study abroad offerings. From the brochure’s opening pages: “Getting an education is one of life’s great journeys. And Central College will be an adventure to remember.” 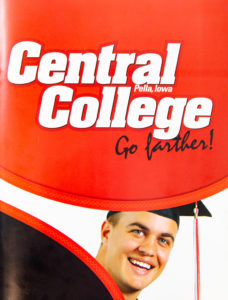 A 2010 admission brochure continues the journey metaphor with a “Go Farther!” tagline. Inside, copy told prospective students Central would feel “more and more like home” during their four years. “Here’s where you could end up,” it concludes, highlighting accomplishments of recent graduates. 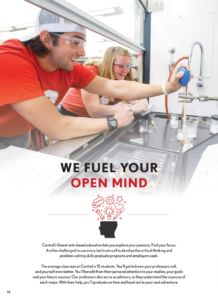 Central’s most recent viewbook and the 300+ emails sent annually use photos of students engaged in hands-on learning, icons and text to show and tell prospective students about the Central experience. “Central’s liberal arts-based education lets you explore your passions. Find your focus. And be challenged to use every last brain cell to develop the critical thinking and problem solving skills graduate programs and employers seek,” it says.

Different language, perhaps, but much the same message as 130 years ago.