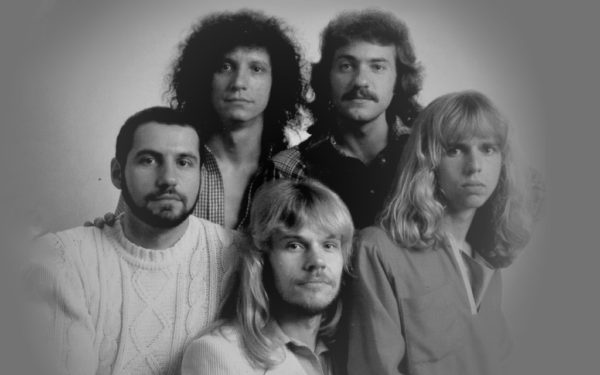 Considering the recent gorgeous $2.2 million renovation of Central College’s Douwstra Auditorium, it may sound odd to dwell on cracked and shattered windows the venue suffered 45 years ago.

But trust me: What broke the glass makes the story.

The culprit wasn’t a rock fl ung by a hooligan student.

It was the rock show staged by the band Styx on Jan. 22, 1975. That night turned out to rate a milestone both for Central’s original stately chapel built in 1939 and the up-and-coming purveyor of romantic ballads and proggy bombast from the south side of Chicago. It officially qualifies as the most explosive concert in the history of Central. Here’s why. First, it was a hot ticket. “Everybody who was anybody went to the concert,” says Al Paris ’77, who attended the show and now lives in Runnells, Iowa.

By the time the doors opened, the line of 750 or so students had become “an anxious mob,” according to student newspaper The Ray. “There was such a mad rush to get inside that people got wedged in the doorway and barely squeezed through with a lot of help from behind.” Keep in mind that this wasn’t the Styx of “Come Sail Away” or “Mr. Roboto.” The band at the start of 1975 still was four years away from its biggest hit song (1979’s “Babe”) and six years from its highest-charting album (1981’s No. 1 “Paradise Theater”).

This was the scruffier, hungrier band that had begun in the early 1960s with a former accordion player (singer-keyboardist Dennis DeYoung) backed by the twin Panozzo brothers as his rhythm section. Guitarist Tommy Shaw wouldn’t join the band (replacing John Curulewski) until the end of 1975. Yet the Styx that played Pella already had released four (mostly forgettable) albums. But stale two-year-old single “Lady,” thanks to a fresh promotional push by the band’s new record label, suddenly was racing up the charts. It already was No. 1 in Des Moines, according to The Ray. By March it would reach the nationwide Top 10.

Central’s student concert committee first had tried to book Styx as early as September 1974, looking for a hot rock act at a bargain price. Memories have faded, but perhaps Styx signed the contract for a sum well below $10,000. Closer to the gig, the band lobbied for more money.

“They were filling such large venues they wanted a percentage of the gate,” says Art Alt, then the student activities director. (He and his wife, Diane, who ran the college’s media center, spent 27 years on campus. They now relish retirement in sunny Florida.)

Styx’s request for a cut of the gate made Alt laugh: Tickets were free to students.

The Ray at the time noted, “Central College is one of the smallest places Styx has played for a long time.”

In hindsight, the show was even more significant in the annals of Styx: Pella was the last tiny stepping stone before the band’s career took flight. A week later Styx was in Columbus, Ohio, to spend the rest of winter and spring opening sold-out concerts on Queen’s “Sheer Heart Attack Tour.”

What made the Styx concert historic for Central was its sound — but not a sound that emanated from the instrument or voice of any band member.

“THE LOUDEST BOOM I’VE HEARD IN MY LIFE”

The Ray observed that the pre-encore performance of the song “Krakatoa” (on album a weird dissonant thing barely more than a minute long) “included an echo effect through the synthesizer and a concluding explosion.”

That explosion, according to The Ray, “blew out three and broke four more panes of glass.”

Paris witnessed this from his perfect vantage point in the balcony.

“It was incredible,” he says. “It was probably the loudest boom I’ve heard in my life.”

Styx had arranged at least one canon on either side of the Douwstra stage. A large flame reportedly erupted from each canon as well as the furious boom.

The audience responded with a huge roar and cheers, although everybody in the room also was a bit stunned — including the band. Yet the concert went on uninterrupted.

The band and the vast majority of fans probably were oblivious to the shattered glass, which written accounts from 1975 failed to explain.

Alt provides the answer: The auditorium’s heavy velvet drapes had been drawn shut, all the better for the band’s light show. So the shattered glass either spewed outward or cascaded down between the interior wall and the drapes.

Styx is shown performing Jan. 22, 1975, in Douwstra Auditorium — an infamous concert that literally shattered expectations (in the form of Italian window glass).

“It’s not like you see in the movies where the glass comes crashing out,” says Ron Humeston ’76, who helped book the concert and ran a spotlight but by the end of the show was watching from the back of the main aisle.

Had the drapes been open, perhaps the students would’ve been showered in shards of glass.

Styx “put out a lot of sound for the little chapel with their equipment” — 118 decibels according to the KCUI sound meter, as reported by The Ray. And the band “did not have nearly their full PA system set up,” the story wryly observed.

In a letter to the editor in The Ray, John Hanna ’76 lamented “that 75% of the crowd didn’t really loosen up until Dennis DeYoung … actually told the people to stand and put their hands together.”

One assumes that by the time of the Krakatoa explosion, everybody in the audience — perhaps across campus — was awake.

School administrators, meanwhile, objected to the destruction of what turned out to be expensive Italian glass. The student activities budget had to absorb more than $3,000 in replacement windows, Alt says.

And that was the end to pyrotechnics in Douwstra.

At the time, The Ray observed of Alt that he “has never seemed so relieved, so worn out or so happy as during the concert.”

The surprise explosion supposedly was another symptom of Styx’s fast rise: Their pyrotechnician was a relative novice who, Alt says, “loaded the cannons with too much black powder.” From then on the roadie was instructed by the band to measure more precisely.

“It will forever be burned in everybody’s memories who was in Douwstra that night — literally,” Paris says.

It’s not as if concerts by name acts were completely foreign to Tulip Town. The college had been visited by the likes of Count Basie, the Smothers Brothers and Mason Proffit.

Later there was the infamous October 1983 concert by the Tubes, an MTV-era band who — decades before #MeToo — became (The Ray again) “very controversial, largely due to scenes in their stage show that portrayed women in a degrading and derogatory manner.”

Afterward, Shaw said that the audience reminded him of the 1950s because it was a “really clean-cut crowd.” (Except when the Tubes were in town?)

Eric Jones ’87, now Central’s dean of the Class of 2020 and a volunteer football coach, worked security for both the Tubes and Shaw concerts.

Shaw’s music “had a little bit more of an edge to it than the traditional Styx stuff,” he says. 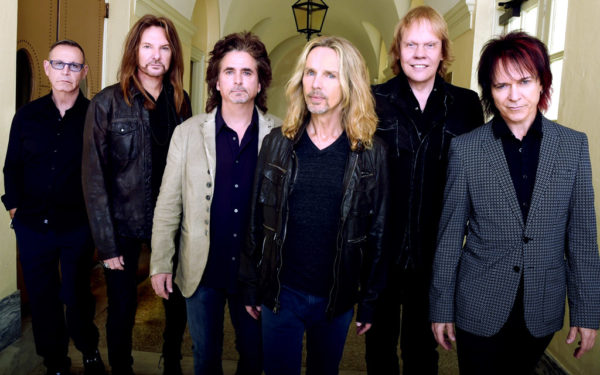 Shaw that night told the student newspaper that he hadn’t spoken to his former Styx bandmates since their 1983 breakup.

Yet today Shaw leads the current incarnation of Styx while DeYoung tours with his own band.

Here’s the logical next step in this saga: Both the DeYoung and Shaw factions of Styx should return to campus for a glorious reunion show. They could reconcile at a site that symbolizes their original artistic drive before global fame and platinum record sales complicated their lives.

To quote Styx: “Deep inside we’re all the same.”

Only one caveat: No pyro in Douwstra.

These tidbits also appeared in the Jan. 24, 1975, issue of The Ray that featured the front-page Styx concert review: 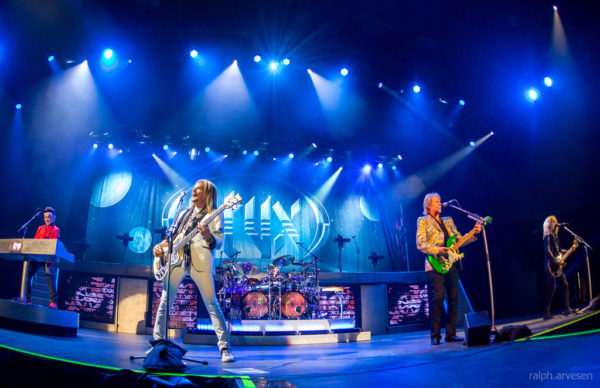 If you missed the 1975 Styx concert at Douwstra, never fear: The two modern factions of the band continue to tour.

The Tommy Shaw-led Styx already has dates booked throughout 2020. Go to styxworld.com.

Former frontman Dennis DeYoung also has a full tour schedule, including shows devoted to the 1977 Styx album “The Grand Illusion.” Go to dennisdeyoung.com.

Here’s your chance to help fill Douwstra with historic melodies for generations to come: Phase II of fundraising for Douwstra asks our alumni and other friends to become “Pipe Organ Donors.” The original chapel in 1939 included a grand pipe organ, and the college intends to restore one to the modern auditorium, hand-built by world-renowned craftsmen at Casavant Frérés.

Kyle Munson ’94 served as a journalist for 24 years at The Des Moines Register, where he spent a decade as Iowa’s chief pop music critic, interviewing the likes of Bono, Paul McCartney and Slipknot. That’s why it made perfect sense for him to write this story. He currently is senior content strategist and writer at Principal Financial Group.

Note: Special thanks to Kyle Winward, Central’s technical services librarian. We know he doesn’t have too much time on his hands, yet he took time to scour the college archives for Styx articles and photos.