‘Now What’ for Local News and the Liberal Arts? 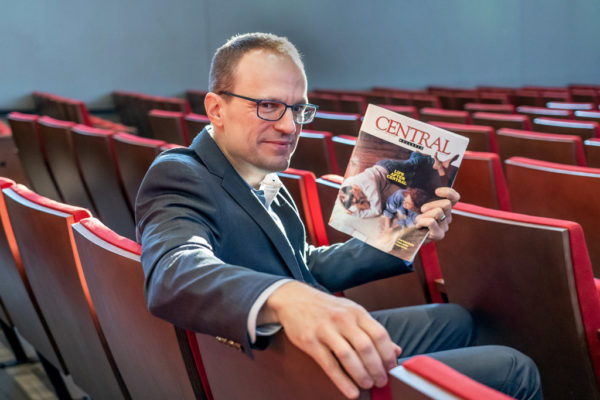 Kyle Munson ’94 sits in Douwstra Auditorium holding the Spring 1994 issue of Central Bulletin, then the alumni magazine. As a senior, Munson wrote an editorial titled “Now What?”

I was a Central College senior when in the Spring 1994 issue of the alumni magazine I filled an entire page with a jumbled essay under the title “Now What?” I failed to answer that or any other question. Arguably I did live up to the issue’s theme of “Life After Central” by demonstrating some students’ utter incomprehension at the true nature of real life in the professional world.

Kudos to editor Kevin Cool ’82 and his staff writer, the late Shawn Presley, for their benevolence in publishing my heartfelt knotted prose.

I rambled incoherently about U2’s Bono and Hank Williams and ended the essay with perhaps its only clear sentence: “Check back with me in 10 years.”

Twenty-six years later I can report that I was prescient in one respect: In 2002 I spent a day with Bono as he led a bus tour through the Midwest to raise funds and awareness for African debt relief. (This was before social media — that entire humanitarian campaign today no doubt would be handled with a single hashtag.)

I’ve invested my entire career in words and media. I worked 24 years in daily news with The Des Moines Register, the newspaper I grew up reading at my grandparents’ kitchen table. A year and a half ago, I pivoted my reporting and digital storytelling skills into content strategy and marketing for global financial services company Principal.

Along the way I developed a bedrock faith in two institutions that shaped my early life: a liberal arts education and local journalism.

They have a lot in common. For instance, both are grounded in asking sharp, critical questions — of our neighbors, of people in power and (perhaps most important in the final analysis) of ourselves.

Both the liberal arts and journalism exist to defy intellectual or social boundaries. Think of them as cultural engines ideally designed to move information, access and opportunity across every barrier of class distinction or privilege.

We often talk about how the Internet ushered in new expanded horizons for humanity. In some ways that’s true. But in another sense we’ve never before lived under such intense quantitative scrutiny, where Mark Zuckerberg often seems to anticipate our every move. The world within our social media bubbles can feel so incredibly small.

Liberal arts and journalism traditionally have drawn boundaries in the best way, by building a shared identity and lending a cohesive voice to their local geographies. These often are small towns sprinkled across rural America for which these institutions are cherished cornerstones.

Or at least they used to be.

A report published last fall by nonprofit the PEN America on the “decimation” of local news has been just one of many to trace the closure of 1,800 newspapers and the loss of about half of the journalists in America in the past 15 years.

“At a time when political polarization is increasing and fraudulent news is spreading,” the report said, “a shared fact-based discourse on the issues that most directly affect us is both more essential and more elusive than ever.”

That one scary sentence sums it up. When you extract thorough beat reporting and investigative journalism from a community, transparency and the informed electorate suffer. We need to maintain a sense of community with our physical neighbors that doesn’t rely on political affiliation, or other categories that tend to divide us.

All this contributes to why I cheered Central’s price change to $18,600 — a vote in favor of transparency for students and families and for a saner overall higher education economy.

In the past 30 years, tuition at public universities skyrocketed by 213%. According to the Institute for College Access and Success, the average bachelor’s degree in 2018 came bundled with $29,200 in loan debt.

It doesn’t take too many sharp, critical questions to realize that local communities are healthier with reliable nonpartisan news and affordable liberal arts education.

So it’s with an entirely different context in this issue of Civitas that I ask, “Now what?” Do we as Americans have the gumption to preserve these institutions that I would argue have contributed incalculable value to all that we cherish about our society?

I would reprise my final line from 1994 — “Check back with me in 10 years” — but that might rattle me more now than when I was a befuddled college senior.

At least this time maybe I’ve rambled a little less.

When in doubt, end with a hashtag: #GoDutch.