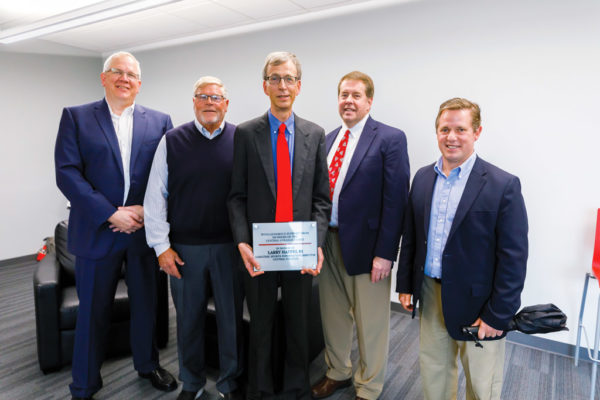 In front of friends, alumni, athletes and other supporters of Central athletics, Happel was presented the plaque that will adorn the trophy case in the M. Joan Kuyper Farver Atrium immediately inside the renovated athletics complex. Central has won 11 NCAA Division III national team championships.

“It’s fitting, in a way, they chose the national champions case, even though I don’t consider my name worthy of being included there,” Happel says. “During the expansion process and in branding the building, the one thing I insisted on, and it was nonnegotiable, was that we need to honor the national champions.

“Our 11 national championships are Central’s heritage. Those are our magic moments, those are our milestones and the best of what Central athletics has achieved competitively. I view preserving that heritage as a key part of my job.”

Happel has spent 40 years in his role with Central athletics and was on staff for 10 of the 11 national titles. Central’s most recent national championship came in softball in 2003. The naming of the trophy case in Happel’s honor came through the generous support of many friends including Steve Muller ’85; Jason ’82 and Betsy Vines; Dave ’83 and Denise Boll Baker ’84; Dave ’61 and Ardie Pals Sutphen ’64; Mark ’80 and Lori Kooiker Ellingson ’82; Sam ’86 and Jill Van Zee Vande Weerd ’91; Tom ’86 and Debbie Koos; Steve and Sophie Mathonnet-VanderWell; George Wares ’76 and Alicia O’Brien; and Al ’75 and Jo Fall Dorenkamp ’74.