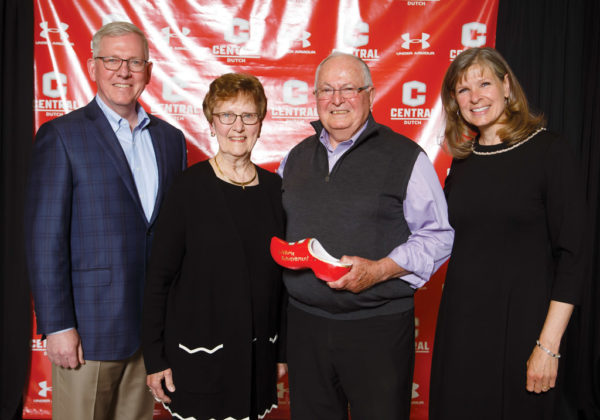 Retired vice president for advancement Dave Sutphen ’61, second from right, and his wife, Ardie Pals Sutphen ’64, second from left, were honored by Central College’s student-athletes at the Dutchies award event.

Dave was a football and baseball letter winner at Central. For 38 years he operated Pella’s Wormhoudt & Kempkes clothing store and was inducted into the Pella Chamber of Commerce Hall of Fame. He joined the college staff in 2000.

Ardie served for 27 years as executive assistant to five Central presidents and as secretary of the board of trustees. Son, Todd Sutphen ’85, left, was a CoSIDA Academic All-America baseball player; daughter-in-law, Val Newendorp Sutphen ’85, right, also attended Central as did daughter Tamre Sutphen Logan ’89, not pictured.

“Dave is more than a fundraiser,” says athletics director Eric Van Kley. “He hosts prospective students, mentors coaches, and is a passionate fan and a friend to our student-athletes. He loves them and they clearly love him. Dave and Ardie are Forever Dutch.”