“College and local officials are working with the DCI in an investigation into the theft of 11 pieces of the Brower Collection from Central sometime last weekend,” wrote Paula Johnson Buenger ’85, the paper’s editor. The article continued: 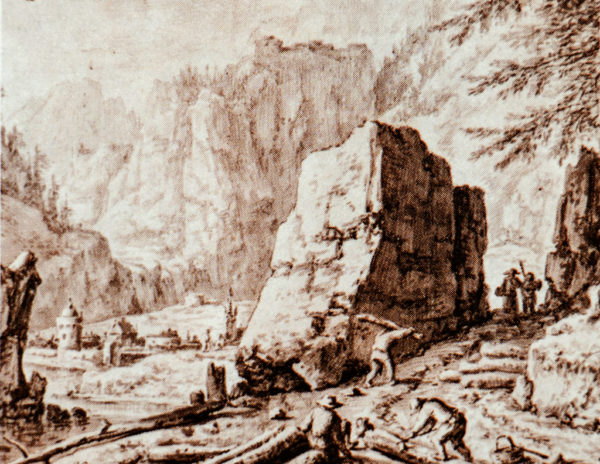 “Landscape” by Herman Salftleven, a Dutch baroque artist who lived in Rotterdam and Utrecht (1609-1685) was one of the drawings stolen in the heist. The college initially hoped the robbery was a student prank and that the artwork would be returned.

“The theft took place between Thursday evening and Tuesday morning when they were discovered missing. The paintings and drawings were located in a special room on the third floor of the Geisler Learning Resource Center, east of the Archives Room. The works were apparently just ripped right off the walls where they were hung framed and on permanent exhibit. There was no sign of forcible entry to the room.

“The 11 pieces, the work of predominantly 17th-century Dutch masters, were part of the Brower Collection, a group donated to the college in 1966 by Mr. and Mrs. Frank Brower ’27 of Beverly Hills, California. Mr. Brower was a longtime trustee of the college.

“Over the years a number of the works have been loaned to other collections for exhibit or have gone on tour. The Fragonard drawing of Don Quixote was loaned to a special Fragonard exhibition which showed at the National Gallery of Art in Washington, D.C., the Fogg Museum at Harvard University and the Frick Collection in New York City.

The story continued: “Also included in the Brower collection is a painting by Dutch artist Rubens, which was hanging in the archives room and was not taken with the rest of the collection. This painting has been moved for security reasons.

“Campus officials have been working with the Pella Police Department of Criminal Investigation in the search for the artwork. ‘I feel confident that we are working with the best in this matter,’ said Hinga. ‘International art publications have been informed of the theft to ensure that none can be sold to a reputable dealer.’

“A real fear of officials is that the paintings and drawings were taken as a prank, and the persons taking the works may now have more on their hands than they bargained for. Hinga said that a real wish of his is to have the works ‘quietly show up at door,’ rather than disappearing. If that were the case then Hinga stressed that the artwork must be returned and not disposed of or destroyed. The work is of considerable learning value and is irreplaceable. Additional security measures have been taken, and a 24-hour guard is now on campus.”

Then College Archivist Alice Lammers was interviewed by Des Moines’ KCCI TV 8 News in the days after the theft. “I couldn’t believe what I saw—these blank walls,” she told a reporter as the TV camera panned over pockmarks and twisted bits of picture wire where the paintings had formerly hung. “It was a terribly sinking feeling.”

Hope that the theft was a prank withered in the days and weeks following the event. The investigation soon progressed well beyond the scope of the Pella Police Department. Eventually, the FBI and even INTERPOL were involved.

GONE BUT NOT FORGOTTEN

Thirty-five years later, the works have not yet been found. But the event remains vivid for those involved.

Buenger, The Ray editor who wrote the story quoted above, is now publisher of the Spencer Daily Reporter, the Dickinson County News and the Storm Lake Pilot- Tribune, all in Iowa. “Those were different times, of course, and security wasn’t as tight as today,” she reflects. “Also, with all the rows of bookshelves and countless study carrels, I would imagine it wouldn’t have been that difficult to ‘stow away’ when the facility closed for the night.

“For myself and the staff of The Ray, it was also a very big deal at the time when the Register later published a story on the theft—it was my first ‘big’ story of my career and we beat the paper ‘Iowa Depends On’ to get the goods.”

The paintings had a harrowing history even before they were stolen from Central. In a 2007 email exchange with Robin Martin, then director of Central’s Library, the donor’s grandson Jeff Brower described his grandmother fleeing the Netherlands with the collection.

“Did you know what she went through to get the Rubens and drawings into the U.S.?” Brower wrote. “She managed to get out of Holland in Oct. 1939 with her two kids (one my father) only seven months before the Nazis invaded. The family story is that a German officer helped her with papers she needed from Germany for the Dutch government in order to emigrate (her husband was a German citizen and died in 1937). She was Jewish, and this officer helped others, but he was later caught and committed suicide.” 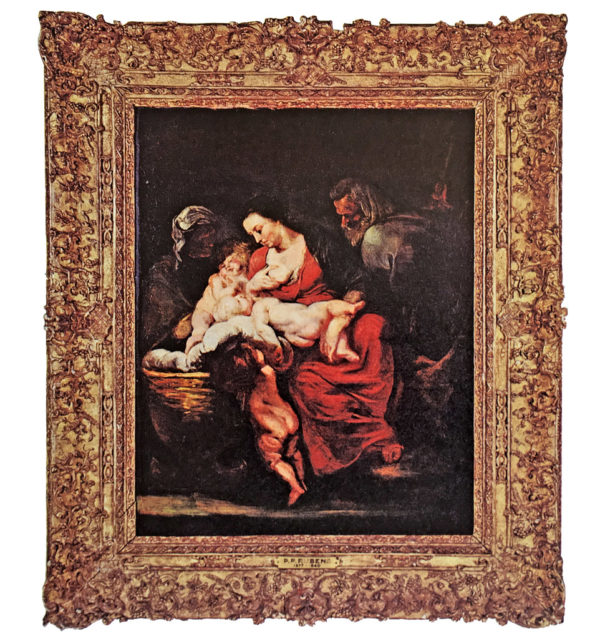 “The Holy Family” by Peter Paul Rubens (1577-1640) is the one painting in the collection that was not taken in the robbery. It was painted by perhaps the most famous, prolific, and influential artist of any work in the Brower Collection. At the time of the theft, the painting was in a different room than the 11 pieces that were stolen, and was perhaps overlooked or inaccessible to the thieves.

The Brower Collection is still listed in the index of the Netherlands Institute for Art History in The Hauge. Eleven of the 12 dated from the 17th century and “forcefully reflect the vitality and the genius that has become the rich tradition of that period,” states a college brochure on the collection published after its acquisition. The sole surviving painting in college custody, Rubens’ “The Holy Family,” was formerly in the collection of the Duke of Sutherland and later the Belvoir Castle collection of the Duke of Rutland. The Browers had purchased it from an Amsterdam gallery in 1932.

The Holy Family remains on display in a high-security, environmentally controlled niche in the college archives on the third floor of Geisler Library. Art students visit it regularly, and library Director Beth McMahon enjoys telling archive visitors the story behind the one that didn’t get away.

“ A DARK CLOUD BUT A SILVER LINING”

How an art collection became an endowed scholarship

“It pains me to write it but I must report that it appears that the paintings will not be recovered,” wrote Central’s then-president Kenneth Weller to Suzanne Brower in January 1985 (her husband, Frank Brower ’27, had died in 1975). “All available leads have been followed up by local and state authorities to no avail. They will continue to check with national and international dealer organizations but they are not very optimistic. The clearest indication of finality is the insurance settlement which we have received.

“The amount of the payment is $93,000. It seems a very fair amount to us in view of the appraisal we have had and the fact that the Rubens was untouched. The remaining question on which we need your advice is the disposition of the funds.”

Weller put forth several options for Brower to consider. He wasn’t obliged to: the Browers had deliberately given the collection to the college with no restrictions, meaning Central could sell any of the paintings or the entire collection if the college believed doing so was in its best interests. A conversion to cash was never the college’s intent, but now that the paintings were gone, Weller wanted Brower’s input.

He suggested the college could use the funds either to buy more art or establish an endowment for one or more purposes: buying more art, financing an ongoing series of art exhibitions in the college’s Mills Gallery, establishing a scholarship for students interested in art or some combination. He was open to Brower’s suggestions but confided his advice would be to endow something permanent and ongoing.

“It is a dark cloud, but a silver lining may yet be possible,” he wrote near the end of his letter. 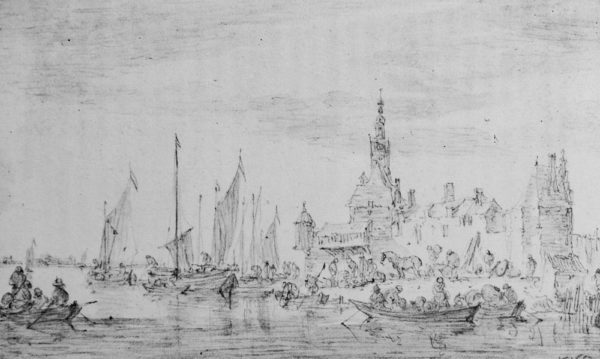 “Port on a River” by Jan van Goyen (1596-1656) depicts a typical subject of a painter and etcher who has been called one of the most gifted landscape artists in the 17th century Netherlands.

Brower was a serious amateur artist and photographer herself. She described in a newspaper article that late in life she’d had a revelation that caused her to switch from representational to abstract subjects. Perhaps her devotion to her painting influenced her response to Weller’s letter.

In any case, Weller wrote Brower in April 1985, one year after the heist: “On the basis of your conversation I have decided to place the $93,000 payment in the endowment funds of the college designated for the Frank and Suzanne Brower Scholarship program” for students interested in art.

Since its establishment, the Frank and Suzanne Brower Scholarship’s endowment has dispersed hundreds of thousands of dollars to hundreds of Central students. Many faithfully wrote Suzanne Brower during her lifetime (she died in 2001) to personally thank her for helping make their Central educations possible.

In their letters, students share with Brower their dreams of becoming artists, art professors, architects, art teachers and graphic designers. They talk of studying art abroad on Central programs in Vienna (Brower’s native city) and the Netherlands, of visiting art shows on Central-sponsored trips to Chicago, of internships with projects promoting public art and of getting their works accepted in exhibitions.

Joseph Cory ’01 wrote Brower that he planned to continue his study of art after graduation from Central and become an art teacher. And he has. After earning a B.F.A. from The School of the Art Institute of Chicago and an M.F.A. from the University of Chicago, he now is a visual artist and associate professor of art and design at Samford University School of the Arts and Faculty Fellow in Samford’s Center for the Arts in Birmingham, Alabama.

Hollie Reilly ’03 grew up in Massena, Iowa, population 355, where she was considered “THE artist” in school and lamented that few art teachers lasted long in her small school district. After majoring in art from Central, she is happily teaching art in the same public school district from which she graduated—and has been for 10 years.