An Actor and a Gentleman 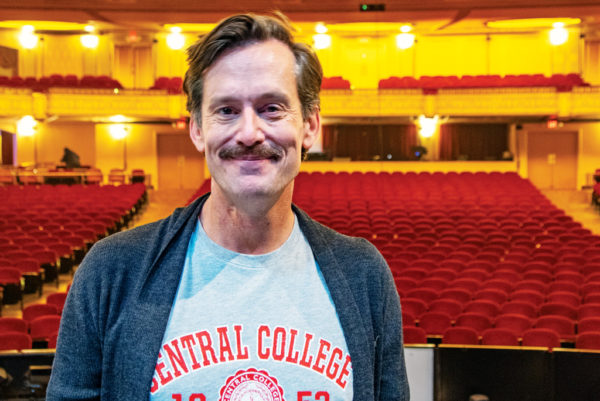 Rob Lindley ’95 wasn’t a standout on the Central College stage. That may be one reason he’s so successful—and so generous-spirited—now.

In the nationally touring production of “The Phantom of the Opera,” Rob Lindley ’95 is, in stage parlance, “M-3” or “Male 3:” the third most prominent male actor in the cast.

In fact, his role as Monsieur André—an owner of a haunted theatre—is lynchpin to the plot. He must cope with a vain prima donna who thinks she runs the show. A totalitarian ballet mistress who DOES run the show. A possessed female lead. Plus fickle critics, an overbearing patron—and of course the Phantom, who plagues the whole lot with gothic horror and mayhem. Meanwhile, André desperately, hysterically tries to hold the opera company together.

Lindley was in high school and college when “Phantom” originally toured, but he wasn’t initially attracted to the production in spite of his longtime dream of performing in a Broadway show.

“‘Phantom’ is quite dark at times,” he explains, sitting by the gas fire in the lobby of the Magnolia Hotel across from Omaha’s Orpheum Theatre during the production’s tour. In contrast, “There’s a bit of a happy, shiny vibe to me,” he says. “I’m a musical comedy guy.”

But when he was asked to audition, the part of André won him over.

“He’s fun!” says Lindley, eyes alight. “He’s comic relief. When I finally saw the show I thought, ‘Wow! No wonder the casting director wanted me for this.’ André has just enough singing that I can use some of my choral training. I get a couple money notes out there. I have some great dramatic moments, and I get a few good laughs—it’s perfect for me. Plus I get to wear the most fabulous costumes. Every coat I put on in the production is amazing!”

He sips coffee and muses a bit on the paradox of Rob Lindley playing Gilles André. 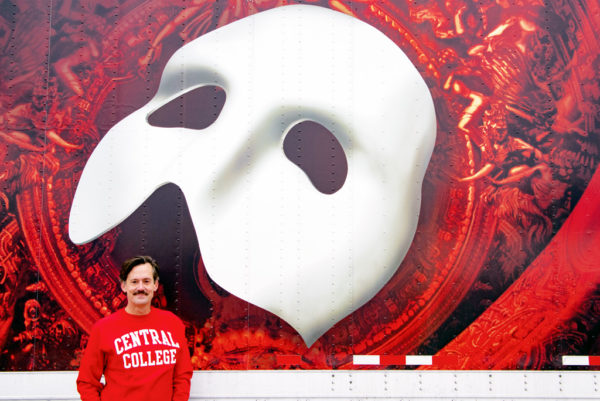 Lindley grew up the son of a minister in Alta, Iowa, a tiny hamlet of about 500 families in northwest Iowa. He started singing in church at 5; by middle school he was soloing at weddings and funerals. “I was brought up that the ability to sing was a gift from God. If you had it, it was your duty to share it,” he says.

He added speech to his repertoire in high school—“one of those great small-town schools where winning speech competitions gave you the same amount of street cred as being a quarterback,” he says. By the time he graduated, he held a school record for the number of all-state speech entries in choral reading and individual categories—double entries every year but one, he recalls.

But it wasn’t all roses: “I was struggling with my sexual identity. I wasn’t popular. I was bullied. But from early on I knew what I was good at and so did everybody else.”

Lindley visited Central the summer before his senior year. His trip coincided with an acting workshop and he was introduced to Assistant Professor of Theatre Fred Nelson and two theatre alumni, Bruce Green ’91 and Julie Schanke ’90. The next fall he visited again and caught a production of “The Visit.” “The performance was stunningly beautiful. I got to witness a group of hungry students get feedback from a professional critic. And the Kruidenier Center blew my mind. I’d never seen anything so high-tech.”

He was also charmed by Pella. “It’s like an Epcot Netherlands!” he says. “I’ve always thought it was so cool.”

He returned home to Alta with a new goal—to act—and a college destination: Central. “My parents nudged me to keep looking, but I had decided,” he says. “My high school graduating class was 45. I would have been swallowed up at a state school. Central was a logical next rung— a place where I could learn a lot and still be a big fish.” 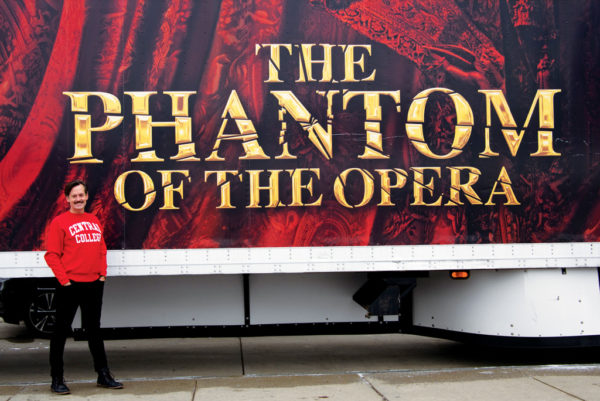 THE VIEW FROM BACKSTAGE

He did learn a lot at Central, but the big fish part came later.

“I didn’t act in many main stage shows on campus,” he recalls. “I auditioned and lost roles all the time. Central was doing a lot of Ibsen and Brecht then—dark dramas. There was no ‘Guys and Dolls’ for me. I didn’t become the star at Central that I thought I’d gone there to be.”

Instead, he says, “My advisor was Professor of Art Treva Reimer, who was more in charge of the technical and design side, so I got trained in every aspect of the theatre. I did set design, lighting design, costume design. I managed the costume shop from sophomore year on. Some weeks I nearly lived there. I was determined that I was going to do theatre for a living, so every time I didn’t get a part in a mainstage show, I’d say ‘Fine. I’ll do this, then!’ I wrote proposals to produce my own shows, with the blessing of Professor of Theatre Bob Schanke. He was the head of the theatre department then and an excellent director. By my junior and senior years I was directing a lot, too.”

Lindley pauses and takes another sip of coffee. “It was frustrating at the time, but I value it now,” he says. “It taught me the kind of tenacity and inventiveness that has sustained my whole career. At Central I had all these opportunities to make my own path.”

He was also an enthusiastic member of the A Cappella Choir. “That was so much fun,” he smiles. “I met my best friends there and really think Central’s A Cappella Choir takes its place firmly in the Midwest tradition of great college choirs. Honestly, except for a little coaching now and then in professors’ offices, the choir was as much formal vocal training as I’ve ever had. And it has been enough, even for a Broadway tour,” he says.

Nevertheless, by senior year, Lindley was a bit anxious about his prospects after graduation. He took heart from Tony Campolo, a minister, writer and international speaker he helped bring to campus as a member of the campus Church Board. “At one point, Campolo started quoting ‘Man of La Mancha,’—you know, ‘To dream the impossible dream’—during his presentation in Douwstra Auditorium. He said, ‘Don’t you want to be like Don Quixote? If you don’t achieve your life’s dream, at least die trying!’” 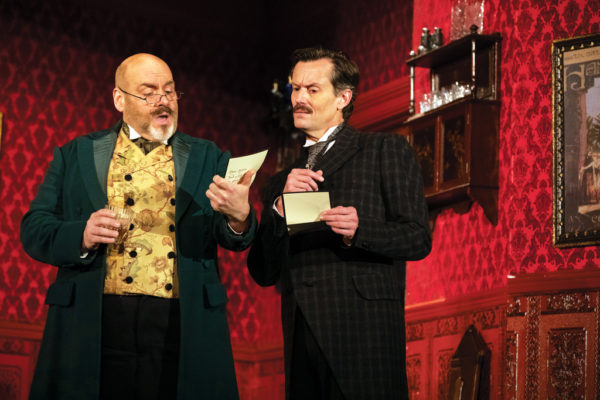 David Benoit as Monsieur Firmin and Rob Lindley as Monsieur André in the spectacular new production of “The Phantom of the Opera.” Photo by Matthew Murphy.

“THE ACTOR’S CRAFT IS ARTIFICE AND MAKEBELIEVE, BUT I THINK IT HAS TO COME FROM SOME PLACE REAL.”

That proposition may have helped motivate Lindley to attend a mass audition in Kansas City with a number of fellow Central theatre majors—some of whom he’d lost roles to for years. “I was going mostly as a techie and a timekeeper,” he says, but at the last minute decided to audition as an actor.

To everyone’s surprise, Lindley ended up with the most callbacks. “I kind of swept the auditions,” he says. “There were more roles there that I was suited for. The next year I was on the road with the Missoula Children’s Theatre, and I’ve been working in the theatre ever since.” 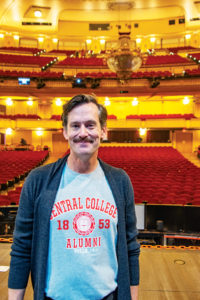 “Some of the people who were stars at Central no longer act. They didn’t get told ‘no’ in college, so in the real world it hit them hard,” Lindley says sympathetically. “They tell me ‘I admire you for sticking it out.’ But they had a plan B, and they now have beautiful, enviable lives of their own. I knew this is all I really wanted to do.”

Also, he says, “I was used to hearing ‘no.’ So when I got turned down I’d turn around and do standup or become a cabaret singer in small nightclubs. It felt just like doing my own shows at Studio B in the Kruidenier. That’s a real skill of mine— any time I’m in a lull, I come up with my own thing to do.”

In 1997 a director told Lindley, “You’re so funny! You should go to Chicago,” where the legendary The Second City company had created a focus for comedy. He’s been in Chicago since. He is a graduate and former instructor at The Second City Training Center and a longtime member of the musical improv ensemble Baby Wants Candy. In Chicago, he’s acted, directed, recorded and taught.

It all led to this, his first nationally touring Broadway role in the most popular musical of all time. The part of Monsieur André is one of a man who earnestly wants for all to go well and for everyone to be happy in spite of overwhelming evidence that things are well out of his control. Lindley performs it with deftness, panache and a deep-yet-comic empathy that seems to come from something far more personal than just a close reading of the script. There is, perhaps, a good deal of Rob Lindley in this Gilles André. And the audience—judging from the laughs and applause he gets—loves him.

“WHERE DID YOU GO TO COLLEGE?”

“Students auditioning for college theatre programs ask me where I went to school. They see success, they want to follow. I say, ‘I went to a tiny Christian college in rural Iowa and I learned a lot about theatre there. Even more important, I learned how to be a really good person and I made the best friends of my life. Those things are the best theatrical preparation you can have.’”

But the greatest impression you get from Lindley—on stage or off—is that of intense sincerity. That quality inspires one last unscripted question—not about his path, but about his purpose. He answers without a blink, as though it is something that informs everything he does.

“I want to enter a room and make it better,” he says. “I believe in being known for kindness. That’s my deeply-ingrained, church-boy Christianity. For a trade that deals in emotion, it is astonishing how many people in the theatre lose sight of that. Also, I want my acting to be authentic. The actor’s craft is artifice and make-believe, but I think it has to come from some place real.”

He continues: “For a while in my life, I wasn’t being fully honest with myself about who I was. I hadn’t come out; I wasn’t standing in my truth. It’s hard to be an actor if your life already has a couple layers of acting on it. You end up presenting something that you just aren’t. But if you are living in the middle of God’s will for you, nothing can touch you. It’s no accident that the summer I came out was the summer I never stopped working again. I am authentic now.

“I love about theatre what I love about church, about sports, about prayer: People assembled in one place, all doing and feeling something together,” he says. “The power of that is profound and noble and worth doing.” 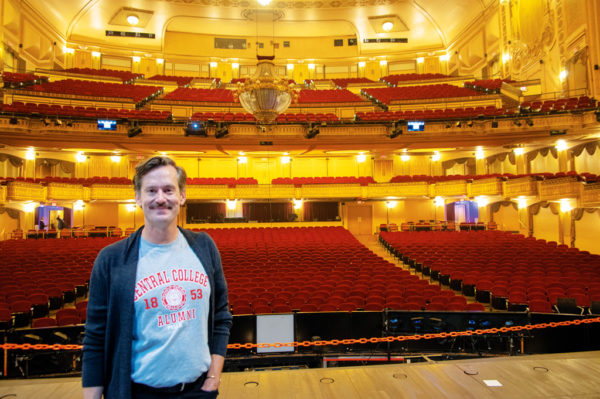