Creating a safe haven for victims of trauma and abuse.

In 2010, Kellie Gorsche Markey ’88 realized you can go home again. The Central grad and Des Moines native returned to her hometown after a career that took her to some of the biggest cities in the world. Now she’s working to make a home for some of the most vulnerable members of the Des Moines population: teen girls in crisis.

After graduating from Dowling High School, Markey headed to Central College, “the first school I applied to and the first that accepted me,” she says. She majored in communication studies and knew she wanted to work in marketing, which at the beginning of her college career she thought “looked like what Darrin Stephens did on ‘Bewitched.’”

An internship while on the urban studies program in Chicago helped to clarify the job, and Markey landed a position at Ogilvy & Mather after graduation. She later moved to San Francisco, working for top agencies like Foote, Cone & Belding. Overall, she spent 15 years in the marketing world before taking a job with eBay in 1999, where she stayed until 2004. 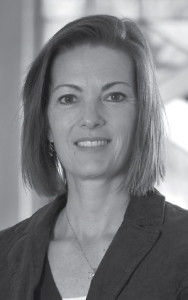 At that time, Markey wanted to make a change. She moved back to Des Moines to reconnect with family and spend time “on sabbatical figuring out what was next for me because I was hoping to make a major shift in my career and in my life,” she says. She ended up buying a house and she’s putting her own stamp on the city.

Markey began investing in distressed real estate and giving it new life, fixing up homes to sell or rent. It was a piece of real estate that first inspired what may be Markey’s most important project yet—Dorothy’s House.

“In 2010 when I decided to stay in Des Moines fulltime, I always knew I wanted to work with teen girls in crisis because I’d been so fortunate in my own life and had so many great experiences. I thought I had something to give back,” she says.

She began exploring organizations that serve kids in the community and became a volunteer with Youth Emergency Services and Shelter (YESS), eventually joining the board. While volunteering, Markey met a girl who changed her life. “She had been exposed to extreme amounts of trauma and abuse, and she was so inspirational to me because she had so much hope and optimism, that I decided to also become a foster parent,” Markey says.

During this time Markey was looking at houses in which to invest, and she walked into a house that seemed special. It was a “beautiful old house, almost 120 years old. And when I walked in that house I knew my journey wasn’t quite finished and I needed to buy this house and create the shelter for teen girls that I always felt I would do,” Markey says.

Dorothy’s House is scheduled to open in November and will provide a home for teen girls impacted by extreme sexual assault and abuse. The house will accommodate up to five girls and the program will also support girls over the age of 18 who have had similar trauma profiles.

For Markey, giving back goes hand in hand with achievement. She says, “I was successful in my career, and I wanted to engage in whatever community I ended up settling in. I feel like for those of us who can, it’s our responsibility to do work that betters our community.”

Markey did some deep thinking about philanthropy and what role she wanted to play during a trek on the Camino de Santiago in 2012. She walked for 31 days on the Camino, which is a pilgrimage route across the northern coast of Spain. She calls walking the Camino “an awesome and overwhelming undertaking.” She had to learn to take the days — and the steps — one at a time, and she found parallels to the world of philanthropy.

“If you don’t know how much time or energy or hope you have to offer your community, find one thing and do it, and it will guide you in what your capacity is for giving and the time and energy you have,” she says. “You can’t know until you try.”