What’s your birthday worth without a dunk in the Pond? It’s seemingly random but always awesome traditions like this that make Dutch life truly Dutch.

In the 160 years since Central was founded, faculty and students have created educational and outrageous traditions fondly remembered by alumni and, in some cases, still celebrated by students today.

Women’s sports weren’t always prominent at Central—and women were craving competition! Dean Henry Pietenpol started the Pietenpol Cup to provide such an opportunity to the young ladies. The contest between freshman and sophomore women focused on music—all of which had to be original. Gary Timmer ’55 recalls the atmosphere on campus. “The competition was intense, and the event was attended by nearly the entire student body,” he says. “Many of the male members resented it because, during the month before, the girls got so involved that they didn’t have much time for their boyfriends!”

The much beloved Lemming Race started out as nothing more than a one-off skit. On a fall night in 1977, a group of second-floor Gaass guys were watching the British television comedy “Monty Python’s Flying Circus” when an animated scene of lemmings—small rodents—jumping off a cliff into the ocean caught their attention. It was suggested that a lemming race would be a good way for Gaass Hall to contribute to Homecoming. Brian Fegley ’80, a race founder, explains the origins of the grand tradition. “For the initial years, the lemming race was, in fact, a race. There were no costumes back then—lemmings just wore running attire. During one of the years, winners even received clay trophies of lemmings made by someone in the art department,” he says.

Students had their legs bound together and shuffled to the island in the pond from the library. Back in the ’70s, the ground gradually sloped into the Pond, so a “cliff” had to be built. “We found an old broken ping pong table in the Gaass basement, and we reinforced it with two-by-fours and formed a version of a cliff that the lemmings had to jump from,” says Fegley. “You can visualize a huge mob of lemmings all trying to squeeze onto that little cliff at the same time—mass chaos and lots of lemmings falling into the pond!”

Although the tradition has changed today, the costume-clad participants still carry on the spirit of the original race. “I think it’s great. A really fun and totally inane tradition!” Fegley says of today’s race. “It’s clear that succeeding generations of lemmings, including both of my kids, have had every bit as much fun with the race as we did in the
late ’70s!” 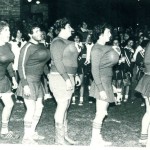 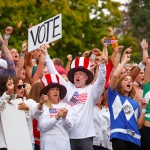 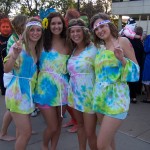 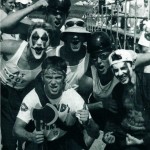 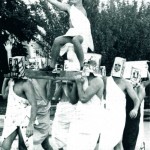 With juniors and seniors dominating the athletic fields, the Frosh-Soph Pull let the underclassmen guys show off their strength—and maybe impress the ladies a bit. The game of tug-of-war dumped the losing team in the Vermeer Pond! Held in the fall every year, the Frosh-Soph Pull often didn’t include football players for fear of injury, but many other guys on campus got fueled up to take on the competition. Timmer fondly remembers his time spent out at the pond—and in it. “The water was dirty and often very cold,” he says. “I know by experience.” 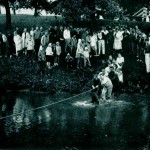 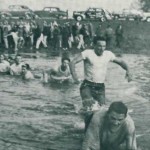 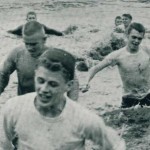 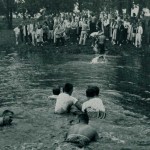 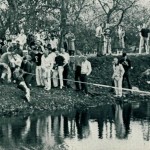 Recognize anyone in these photos? Tell us in the comments.